Consumers in Germany are still buying sustainably – despite inflation and the looming energy crisis. Nevertheless, changes in consumer behavior can be observed, especially in the food sector. That and more is shown by the new GfK Sustainability Index, which is published every three months.

Sustainability remains important to German consumers despite current world events, as the GfK Sustainability Index for July 2022 shows. It stands at 39.2 compared to 39.7 in April. This figure shows that German consumers continue to pay attention to sustainability in their purchases. Despite the stable index, current events such as the looming energy crisis and inflation are having a varying impact on purchasing behavior in different categories.

Inflation is the new number one concern of Germans; in 2021 the Covid pandemic was still the main concern. Climate change remains stable in second place on the list of Germans' biggest concerns. 71 percent currently consider climate change to be a serious problem, which is 2 percentage points more than last year.

In a European comparison, however, the Germans are ranking behind other countries in terms of sustainability. Comparative data from GfK for Italy and France show that sustainable purchasing is significantly more important for the European neighbors: In Italy, the index is at 58.0, in France at 52.1.

The share of people who made major sustainability-related purchases in the past twelve months fell slightly from 30 percent to 26 percent from April to July 2022. At the same time, the proportion of people planning to make major purchases with sustainability in mind in the next twelve months rose from 24 to 27 percent. The willingness to pay more money for sustainable products remains almost constant despite inflation: 68 percent of consumers planning major purchases agree. One reason for this development could be the strong rise in energy costs: "People are increasingly planning to switch to solar energy and heat pumps to save on energy costs and do something for the environment at the same time," comments Petra Süptitz, sustainability and consumer insights expert at GfK. "It is also likely that consumers are now more mindful of buying energy-efficient appliances to save electricity."

In the case of household appliances, there is a clear trend toward energy-efficient appliances. However, there are differences between consumer groups with different values, attitudes, or tech affinity: The so-called Trend Surfers and tech-savvy Alphas in particular are planning more sustainable purchases. For them, sustainability is a lifestyle and status symbol that they like to combine with product innovations or premium features.

More significant changes can be seen in the case of products for everyday use: Here, the proportion of people who bought based on sustainability aspects in the last month fell from 72 to 66 percent. Organic products continue to be in vogue. While sales in the overall FMCG market declined by 2.8 percent in the first half of 2022, sales of organic products were stable compared to the previous year. Currently, consumers prefer to buy organic products at lower prices from discounters or trade brands. The percentage of consumers who plan to buy sustainably in the next four weeks dropped slightly from 68 to 64 percent. "People with low incomes in particular tend to hold back here. This was already observed in the previous month and is less surprising under the current circumstances," informs Petra Süptitz.

The willingness to pay more money for sustainable products also remains nearly constant and, with 69 percent of consumers, is very similar to major purchases. The consumer groups of Idealists and Care-takers in particular plan to continue buying sustainable everyday products. For these people, sustainability is deeply rooted in their personal values. These people are not only active when it comes to shopping, but they also save more than others when it comes to electricity or water. 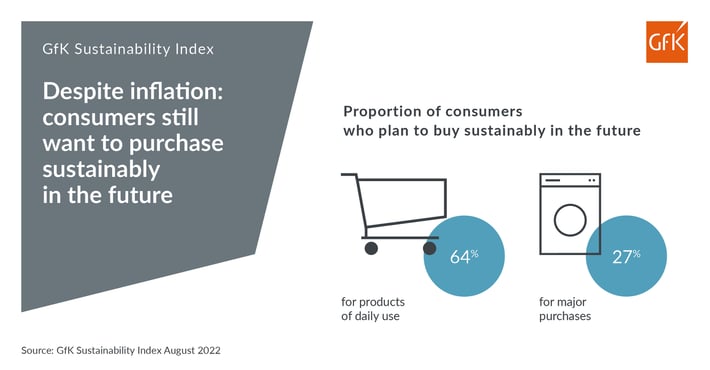 Around half of Germans are "crisis-resistant"

Although inflation and rising prices dominate the headlines, these developments affect different sections of the population to different degrees: Around fifty percent of Germans are considered crisis-resistant. These are mainly people with higher incomes who are not worried about their jobs. Such people are currently less worried, for example, about high inflation. On the other hand, people with lower incomes have to cut back in particular.

"Sustainability is deeply anchored in the values of Germans. Many consumers are currently looking for clever alternative strategies, especially when it comes to everyday products, in order to be able to shop sustainably while saving money," explains Petra Süptitz. "Nevertheless, there are consumer groups such as the Trend Surfers or the Alphas who continue to focus on brand-name products and see sustainability as a lifestyle aspect that they associate with quality, enjoyment and aesthetics. Companies should make sure that their products and services meet these different needs.”

GfK Consumer Life is the largest and longest-running trend study of its kind and focuses on the changing values and attitudes of consumers. To this end, the data of more than 30,000 consumers in over 25 countries has been collected annually since 1997.