The global market for technical consumer goods (TCG) exceeded the one-trillion mark for the first time in 2018 with sales of €1.01 trillion*. This is a four percent increase on the previous year. The product segments of telecommunications (+7 percent), small domestic appliances (+7 percent), consumer electronics/photo (+6 percent), and information technology/office equipment (+1 percent) all contributed to this growth in sales. Global sales from major domestic appliances, on the other hand, fell slightly by one percent.

For 2019, GfK is expecting a two percent increase in technical consumer goods sales on the global market to around €1.03 trillion*. These are GfK's current results on the occasion of the CES 2019 in Las Vegas.

With a sales share of 42 percent, Asia-Pacific continued to defend its position on the technical consumer goods market in 2018 as well. A further 25 percent of sales was achieved in Europe, around 20 percent in North America, seven percent in Latin America, and six percent in Middle East/Turkey/Africa.

Markus Kick, GfK expert on technical consumer goods, explains, "Globally, technical consumer goods achieved sales of more than €1 trillion for the first time in 2018. This is a real milestone for trade and industry. The areas of telecommunications, small domestic appliances and consumer electronics proved to be the biggest drivers of sales. We are seeing a trend toward premium products in almost all segments. Consumers are also placing ever more value on connectivity and convenience. Based on this trend, GfK is also expecting solid sales growth in 2019 with an increase of two percent."

With a sales share of 44 percent and a volume of around €440 billion*, telecommunications is the biggest segment among technical consumer goods in 2018. Consumers now increasingly go for premium products, especially in the smartphone segment, which has enabled global sales to rise by a further seven percent. However, the market is stagnating in terms of quantities sold.

Notwithstanding Latin America (-5 percent), sales in 2018 increased worldwide, especially in Europe (+14 percent) and North America (+12 percent). However, GfK is not expecting to see any further growth in sales in 2019, but rather stable development at the same level as the previous year.

Major domestic appliances (MDA) continued to be the second-largest segment among technical consumer goods in 2018 with sales of around €177 billion*, despite a slight decrease in sales of one percent. Overall, around 17 percent of all TCG sales last year was attributed to major domestic appliances such as refrigerators, ovens, washers or dishwashers.

Currently trending are multi-function devices and connectivity - the possibility to network devices with one another or control them using a different device.

Sales in Latin America (+6 percent), Europe (+3 percent), and Asia/Pacific (+2 percent) developed positively last year. GfK is predicting further significant global growth in sales for 2019 of six percent, which will more than compensate for the slight losses from last year.

In 2018, consumers worldwide spent around €157 billion* on IT and office equipment, as well as consumables - about as much as in the previous year.

In the IT segment, there is currently a demand for high-performance devices, especially in the gaming PC and gaming notebook segment. While sales in Latin America and Asia/Pacific rose slightly in 2018, they stagnated in Europe and fell in Middle East/Turkey/Africa as well as in North America.

The office equipment and consumables segment recorded a positive development. Global sales in 2018 increased by three percent to around €16 billion*, with growth primarily coming from Asia, and China in particular. In 2019, however, GfK is expecting to see a global decrease in sales of around three percent in the information technology/office equipment segment.

Global sales in the consumer electronics and photo segment rose in 2018 by nearly six percent to €153 billion*. This segment alone accounts for around 15 percent of all TCG sales.

There is also a trend for premium products in consumer electronics. High-end TV sets with screen sizes of at least 50" produced significant growth in sales. In the premium segment, OLED TV sets continue to increase in popularity. Headphones and portable Bluetooth speakers proved to be significant drivers of growth on the audio market. Sales of entertainment electronics developed particularly positively in Latin America (+24 percent). Sales in Asia/Pacific, Europe and Middle East/Turkey/Africa increased by between four and five percent.

The photo segment was not able to break its negative trend and lost a further five percent of sales in 2018. Globally, cameras and accessories achieved €15 billion* in sales. Positive aspects set the tone for high-end cameras. In 2019, GfK expects to see slightly less growth in sales of around four percent on the global consumer electronics and photo market.

Small domestic appliances (SDA) achieved global sales of around €86 billion* in 2018. This is a significant increase of seven percent. Driven by very positive demand in China, sales in Asia/Pacific increased by 13 percent overall. In Latin America, as well as in Middle East/Turkey/Africa, sales grew by ten percent, while growth in Europe was recorded at seven percent. Only in North America did sales decrease slightly, by two percent.

As part of its retail panel, GfK regularly collects sales data in more than 70 countries worldwide regarding products in the consumer electronics, photo, telecommunications, information technology, office equipment, and major and small domestic appliance segments. Data for North America are based on estimates.

GfK is publishing press releases on the topics of consumer electronics and the overall technical consumer goods market on the occasion of the CES Las Vegas. You can find all the information at: https://www.gfk.com/press-room/press-releases/ 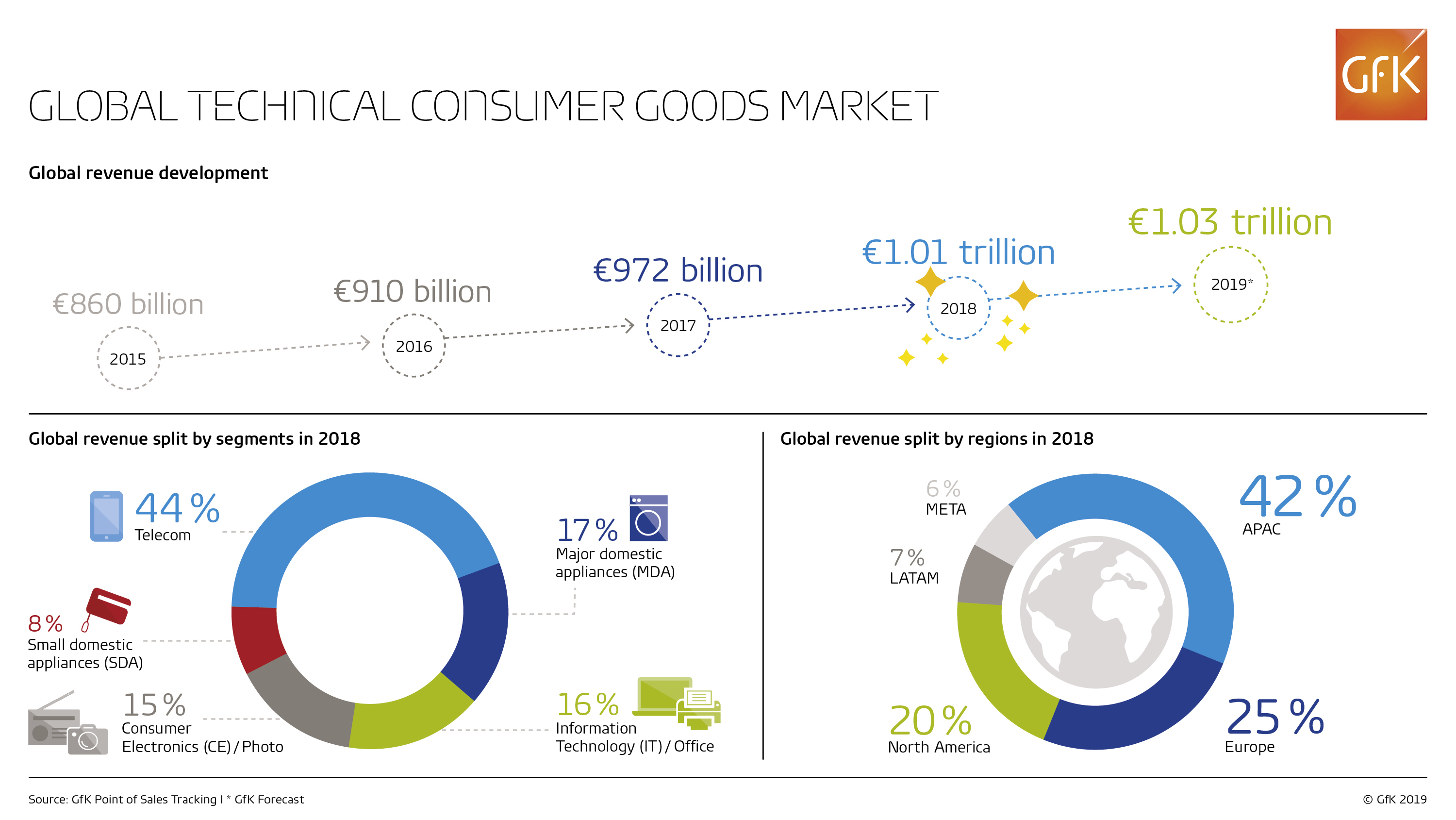