Nuremberg, September 28, 2017 – When it comes to the activities that people do regularly to maintain their physical health, it is no surprise that close to two thirds of the online population across 17 countries include getting enough sleep, eating healthy nutritious food, and exercising. What is more surprising is that nearly equal numbers (62 percent) now include “spending time with family, friends or pets” as something they “do regularly to maintain their physical health”. This is up from 56 percent in 2014.

Getting enough sleep has stayed constant over the last three years, in terms of the percentage of people who regularly include this as part of their physical health routine. However, there are notable increases in some other activities – especially following a specific diet, unplugging from technology, eating healthy nutritious food and spending time with family, friends or pets:

GfK’s research indicates that ‘quality time’ has taken a step forward in people’s perception of what keeps them physically healthy. “Taking a break from technology” has increased from one in four people (24 percent) in 2014 regularly doing this to maintain their physical health to one in three people (34 percent) this year – the second largest increase across all the activities listed. In addition, “spending time with family, friends or pets” has increased from just over half of people (56 percent) in 2014, to just under two thirds (62 percent) this year.

Eating the right food is also getting notably more attention than in the past. “Following a specific diet” climbed from 18 percent in 2014 to 30 percent this year; the biggest increase among all the activities listed. And “eating healthy nutritious food” is now mentioned by 65 percent of respondents, compared to 58 percent in 2014.

Mexico, Spain and Canada in top five countries for spending time with family, friends or pets as part of their physical health routine

Nearly three quarters of the online population in Mexico regularly spend time with family, friends or pets in order to maintain physical health – the highest percentage for all 17 countries surveyed. They are followed by Spain and Argentina (level on 71 percent) and Canada and Brazil (level on 68 percent).

Mexico also tops the list when it comes to taking a break from technology as an activity to help maintain physical health, with 43 percent of the online population regularly doing this. Here they are followed by China (40 percent), Argentina (39 percent), Spain (38 percent) and Brazil (34 percent).

Download GfK's complimentary report on “activities to maintain physical health” to see specific data for each of the 17 countries included in this survey, showing key demographics.

GfK combines these self-reported insights with data from areas such as point of sales tracking, consumer panels and geo-marketing to help clients successfully target high-potential audiences both globally and within specific countries. 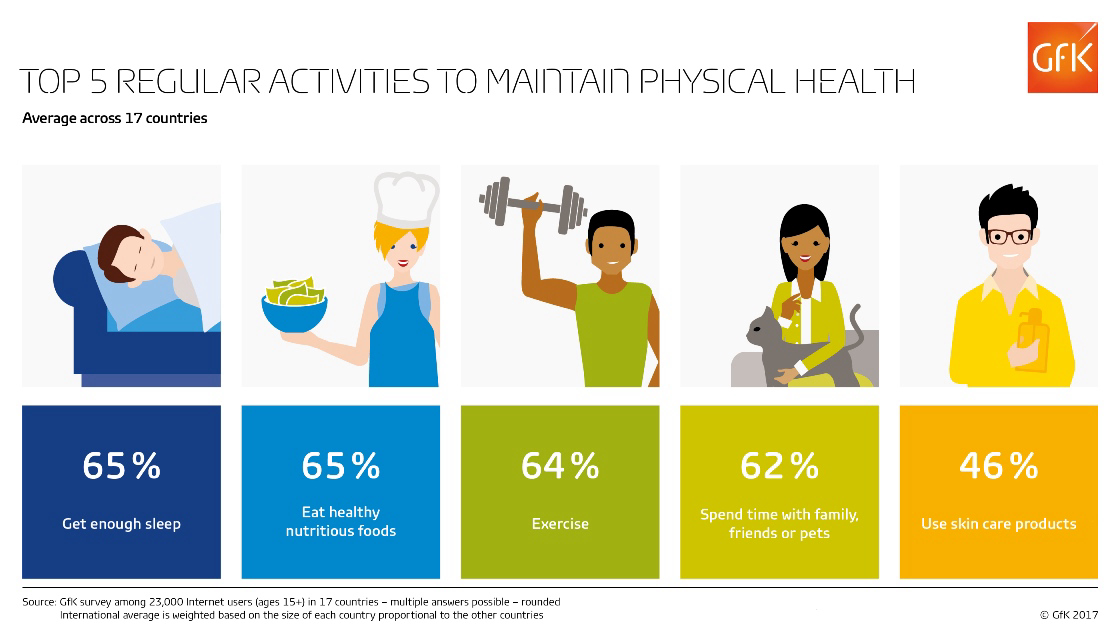 In 2017, GfK asked 23,000 consumers (aged 15 or over) online in 17 countries to indicate which activities from a given list they do regularly to maintain their physical health. In 2014 GfK asked the same question of more than 21,000 consumers in 16 countries (excluding the Netherlands).

Fieldwork was completed in summer 2017. Data are weighted to reflect the demographic composition of the online population aged 15+ in each market. The global average given in this release is weighted, based on the size of each country proportional to the other countries.