Gaming products get the high score for IT

The value of the retail IT market declined by 8% in the first quarter of 2016 compared to the same quarter the previous year. Declines in traditional computing form factors and tablets were the primary cause of this drop but there were also surprise falls in the value of the storage and networking markets. Despite this, gaming products remain an opportunity for the channel.

Mobile computing (which includes laptops), media tablets and desk computing are the three product areas that make up the most value of the IT market. The value of the tablets market declined year-on-year by 8% and there were double-digit declines for the mobile and desk computing markets over the same time. This highlights the challenges facing of the IT sector, as these declines are unlikely to change in the near future as the factors causing the falls remain constant.

The declines in the storage and networking markets were somewhat surprising given that both of these areas have been in consistent growth for several quarters. The communication device market (which includes routers and Wi-Fi repeaters) declined by 0.4% in value compared to the same quarter the previous year, although the volume of this market did grow by 12% over the same period. This suggests that there is still demand from consumers for the kinds of products that help them use data, but manufacturers and retailers need to focus on the key price points.

Despite an overall decline for the storage market of 8%, the value of the Solid State Drive (SSD) market saw growth of 10% comparing Q1 with Q1, demonstrating that innovation can still drive growth for the IT sector. SSDs are particularly popular among gamers building or upgrading PCs, as the flash-based storage can significantly reduce loading times. This impact of gaming on the storage market is part of a wider trend within IT. The market for gaming keyboards, for example, saw value growth of 50% from Q1 2015 to Q1 2016, and for gaming mice it was 30%. In both these product areas, the value growth was higher than the volume increase, demonstrating that with optimal features and marketing, consumers are prepared to pay for premium gaming products.

Overall, the increase of gaming components and peripherals isn’t enough to offset the declines to IT from computing and tablets. The impact of gaming does, however, demonstrate that even in challenging conditions there are opportunities to generate value in IT. 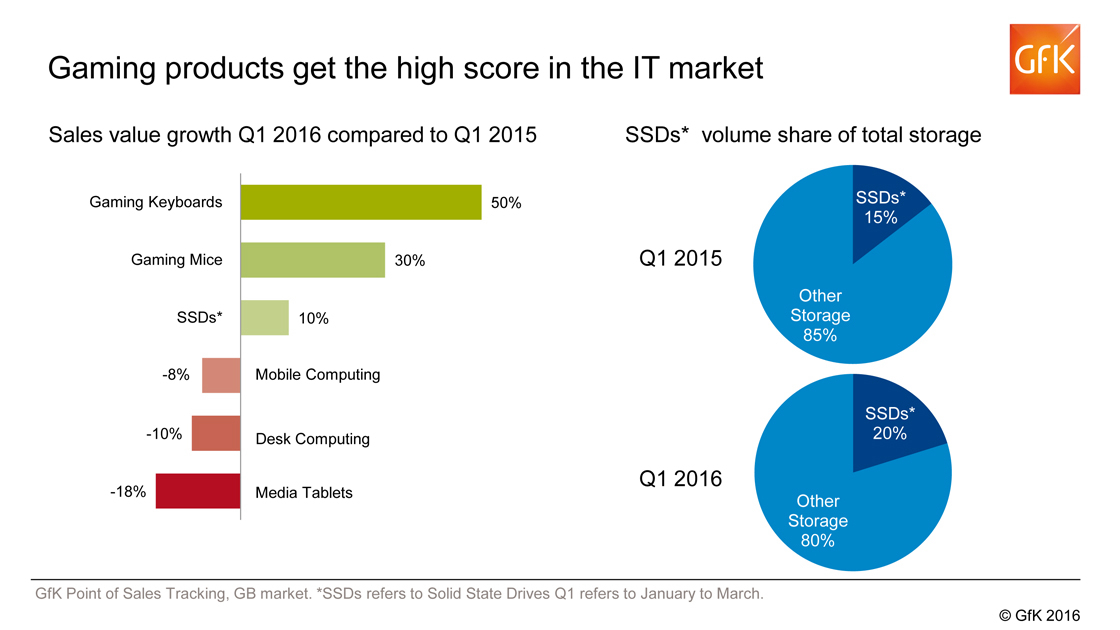