The COVID-19 crisis has put forth a lot of challenges in changing consumer behavior, retailers and manufacturers reacting to the outbreak, adapting to the measures of strict social distancing and lockdowns, preparing for a potential recession, to speculating on what the post-crisis landscape will bring. Consumer behavior has changed significantly every few weeks as we enter each new phase of the coronavirus impact. We have classified these in three phases:

The panic phase denotes the onset and spread period (Jan-Mar 2020) of the pandemic. During this phase, manufacturers’ and retailers’ focus was on the impact to production and supply chains, given the major role that China plays in the global production network. People’s free movement was also restricted and the footfall for physical retailers collapsed – triggering changes in consumer behavior and their focus shifted towards securing their basic needs and essential categories. Although overall spend on categories dropped, it did not stop completely, as consumers adapted by switching some of their offline spend into digital channels. Even those not savvy with online shopping overcame their personal barriers to make these purchases – and, consequently, are now used to the ease of making an online purchase.

The extra demands triggered by the crisis, as well as the timely performance of operational retailers who adapted quickly in supporting fully online sales, prevented a total crash - but that shift has not come close to offsetting the overall reduction in spending. We also expect certain parts of the newly acquired online consumers will continue purchasing online, even post-lockdown.

The changing consumer behavior was again apparent during the widespread lockdown period in March and April. The urgent need for people to work and learn from home triggered substantial demand for IT and office products. In Great Britain alone, notebooks and computing tablets displayed growth of +75% versus previous year during the weeks 11-17. This growth was 85% above the pre-crises GfK forecast for these categories for the same period. 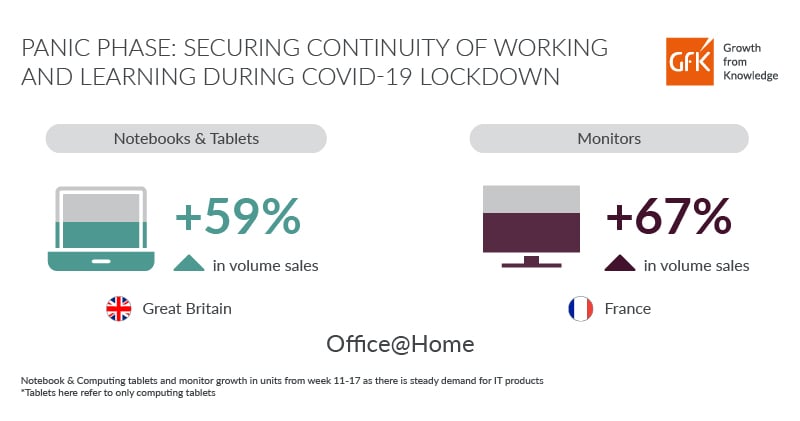 Similar dynamics hold true for other EU-5 countries, which point towards a change in the usual seasonality trends in the short term and positive momentum for future replacements in the long term. Because the lockdown in each country was imposed with immediate effect, it forced consumers to make quick purchase decisions on the items they considered essential in order to stay at home. This led to an increased number of ‘value for money’ purchases and decisions to go for “simpler” products, because consumers were buying whichever models were still available in the market. Again in Great Britain, the demand for notebooks and computing tablets grew +59% in volume in weeks 11-13, but the average selling price dropped by -10%.

Eating at home resulted in specific extra demand as well. In many countries, stockpiling of FMCG goods led to empty shelves in supermarkets. In week 11, stockpiling of food in Germany drove the sales of ready-to-eat meals up +16% points, compared to the average over the first 8 weeks of the year. Quickly people ran out of freezer storage space. As a result, in weeks 10-12, sales of Freezers grew +185% in volume, as a result of increased demand for storage of all that food.

The adapt phase started with major economies imposing strict measures, which continued up to week 17 (end of April). Once consumers adjusted to life in lockdown there was yet another change in consumer behavior, their needs expanded beyond just “Office@home”. The increasing focus on “Entertain@home” resulted in high demand for consoles and streaming sticks.

Gaming consoles grew a whopping +259% in Great Britain for units sold, and streaming sticks grew strong +54% in the Netherlands during the initial lockdown weeks 11-14. With people being home-bound and have extra time, over 40% of French and Italians reported spending more time on social media platforms like YouTube and Facebook. “Eat@home” tendencies also accelerated across many countries, hence categories like Food preparation grew +28% in volume over weeks 13-17 in Germany.

But the trend has not been positive for all categories. People have postponed many planned purchases, especially in the clothing and leisure sectors, due to the crises. In the tech and durables market, usual purchases of smartphones, wearables, washing machines and digital cameras have been postponed as they are considered as non-essential purchases in this crises period. It has also made European consumers less optimistic about finances, as reflected in the German consumer climate index decreasing by a historic -38% points between February and April 2020.

It goes without saying that, the lockdown has altered the channel mix. Across EU5 countries, online sales had more than doubled (+129%) as of week 17, whereas offline sales were nearly halved (-50%) thanks to store closures. However, consumers are, in many cases, sticking to the retail brands they are used to, and simply switching to online to make their purchase.

During the bulk of lockdowns so far (weeks 11-17), the total tech and durables market in EU-5 declined -8%. This may change as countries are now taking the first steps towards returning to normalcy. Germany has been the first to start, and the very first week post-lockdown saw the tech market's revival by +9% as small shops reopened. We are already seeing another change in consumer behavior.

Week 17 was the first week to see positive value growth for the EU-5 tech and durables market since the lockdowns began – standing at +1.4% versus the previous year. However, the scale and speed of recovery is going to vary for each country, based on the depth of recession, unemployment levels, overall consumer confidence, and available government budgets.

The area we need to track is whether people will make up the postponed purchases in full – making use of the money they would normally have spent on travelling or leisure activities outdoors etc. or whether the fear of a widespread recession will change consumer behavior towards saving their money for a possible difficult financial year ahead. Nonetheless, it is certain that postponed, yet necessary purchases will revive, and consumers are likely to make in-store purchases in a need-based manner. These include traditional retail dominant products such as large electrical appliances,  products that require sales staff consultation such as built-in appliances, smartphones, big-ticket small electrical appliances such as fully automatic coffee machines or cordless vacuum cleaners where people are keen to handle the product before they make a decision.

Store reopening could usher in demand and opportunities for many categories which lost due to postponement or being considered non-essentials in the past weeks. For manufacturers and retailers, this will be a critical time to encourage sales through carefully pitched promotions. As we witness another channel switch and offline sales slowly inching back to normal by week 18, we would need to wait and watch how the Adapt Phase sets the tone for The New Normal.

Get the latest market insights