Consumer confidence – does it impact pricing of products?

When consumers feel more confident about their own financial situation and about the economy they tend to be more optimistic and spend more. However, in recent times consumers are not feeling optimistic, as tracked by the GfK consumer confidence monthly report. With additional external factors like inflation and Brexit, will this impact consumer confidence further and what will retailers need to do to reduce the impact to them?

Why does it matter?

Consumer confidence is an indicator for businesses and economists to understand how consumers are feeling in current economic climates. It should give a good indication on what consumers feel and what their potential spending plans are, when it comes to making major purchases. This is important for retailers and manufactures to track, as this can affect profits and help with understanding a consumer’s outlook.

The latest GfK consumer confidence index for October remains negative and decreasing from -9 to -10, which suggests consumes are ready to further scale back their spending. The GfK consumer confidence study (see table below) found that 65% of consumers that were asked, believe that prices either will have a rapid increase or will increase at the current rate in the next 12 months. This could mean that consumers decide to buy now rather than waiting for price increases, especially with the uncertainty surrounding Brexit. 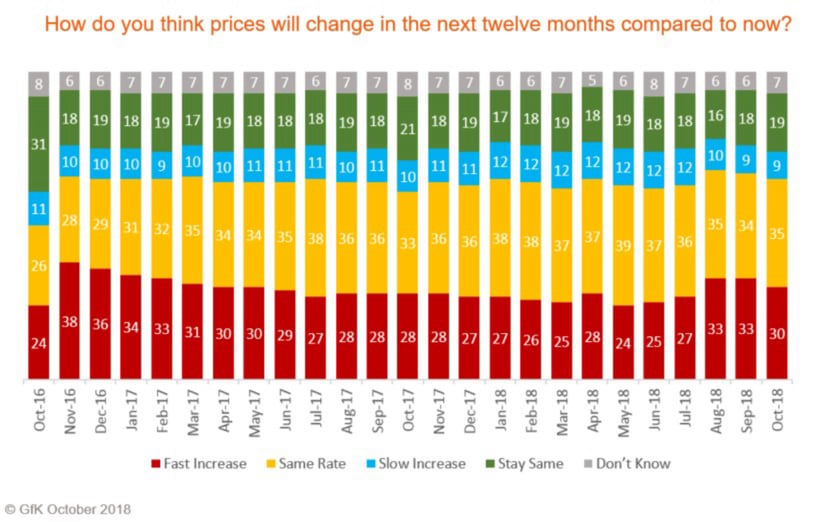 What affect does it have on pricing goods?

With low consumer confidence and the majority of consumers think prices will rise, retailers and manufacturers need to act to entice consumers to continue spending. As both need to make sure they sustain or increase demand levels with their pricing and promotions, otherwise they could see profits fall.

We are already seeing some action, with retailers’ pricing on 43-55 inch TV’s dropping by 18% in the past 12 months – and 10% over the last 3 months. This indicates that retailers know they need to compete for business to gain more consumers and increase sales.

For both manufacturers and retailers, until recently there was an upward trend in the number of consumers who thought that now was a good time to make a major purchase. However, this has taken a slight decrease in the last month – as shown in the graph below. So enhanced promotions on items such as white goods or furniture may well entice more consumers to spend, rather than save in the upcoming sales events.

What else can retailers and manufacturers do?

This is a pivotal time for retailers, with the ONS reporting that wage growth is at its fastest for nearly 10 years, suggesting that consumers now have more disposable income to spend on major purchases. Inflation will play a major part on this with the recent announcement that it has fallen back to 2.2%. If inflation doesn’t increase it could mean consumers become more confident about purchases and feel the effects of wage growth even more.

With wage growth on the rise and inflation not increasing as much as initially thought, what do retailers and manufacturers need to think about, going forwards, to make sure consumers choose to spend rather than save?

Both groups will need find ways to stay competitive and relevant in an arena where consumers are now more concerned about getting value for money or having a memorable shopping experience. For example, John Lewis recently announced that they are looking to boost their in-store experience – aiming to buck the trend of more consumers moving to online shopping rather than in store. This is an ongoing battle, given that ONS reporting shows online sales have increased by 14.2% in August 2018, compared to the same time last year.

If online sales keep growing this way, retailers will more than ever need to be able to react fast in areas such as changing their prices instantly to make sure they aren’t second best or being undercut by a rival. This could also lead more manufacturers to having their own website to sell directly to consumers, and as a way to connect with consumers directly rather than through a retailer.

Overall, consumer confidence is an important indicator for retailers and manufacturers for current and future plans.

With consumer confidence not improving, prices will need to be more attractive to get consumers to spend. Manufactures may need to take a leaf from Apple’s book and offer a high-end product at a more affordable price to entice consumers – as seen with the iPhone SE and iPhone XR. How retailers plan to entice consumers will be important to events like Black Friday and the Christmas period coming up. It is crucial that their promotions and pricing are well positioned, compared to competitor promotions, to make these events a success.

On the plus side, with wages on the rise and consumers feeling that prices will increase if they wait too long, this could lead to a new wave of spending - especially with Brexit looming. The uncertainty could mean that consumers choose to spend now, rather than waiting to see what happens.

Impact of COVID-19 on consumer behavior