We asked over 27,000 people across 22 countries to indicate how strongly they agree or disagree with the statement “I want to enjoy life today and will worry about savings and investments later”.

By analyzing the results at different levels (international, by country, by gender, by age group), we can share a snap-shot of the financial mindsets prevailing in different countries and demographics. For example - does a specific country have a population that favors living for today – and therefore are likely to respond to offers of instant-access accounts or cash-back incentives? Or does the population favor thinking about savings and investments today – and therefore be more interested in long-term fixed interest accounts and pension products etc.  And what is the breakdown across age groups and genders? 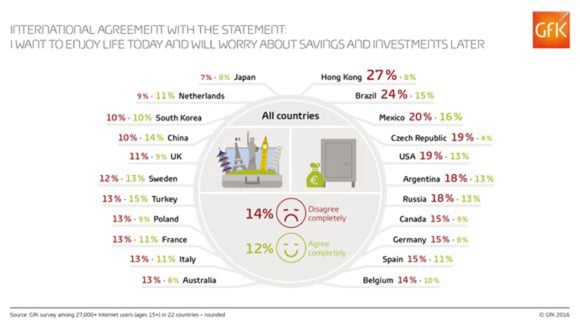 1. 16 of the 22 countries are fairly evenly divided between fun-lovers and savers

Only eight of the 22 countries in the survey showed a big gap (ten percentage points difference or more) between those who agree with putting off worrying about savings, and those who favor thinking about savings and investments today. And, in all of these, the larger group is on the side of favoring saving today.

2. Only four countries have more fun-lovers than savers

Of the 22 countries studied, only China, the Netherlands, Sweden and Turkey have greater numbers of their online population who agree with enjoying life today and worrying about savings and investments later, compared to the number disagreeing.

3. Hong Kong is only country where over half of the population favor saving today

Hong Kong stands out as the only country where more than half of the online population show a ‘save now’ mindset. In this country, 54 percent disagree with the idea of enjoying life today and worrying about savings and investments later. The Czech Republic runs second with 49 percent disagreeing, followed by Brazil with 45 percent.

4. Women more inclined to be savings-minded; men are evenly divided

Although a third (33 percent) of women internationally agree with enjoying life now and worrying about financial security later, a greater number (40 percent) disagree. Men, however, are more evenly divided with 36 percent agreeing and 35 percent disagreeing.

Online consumers aged 20-29 years old have the highest percentage of fun-lovers of any age group, with 41 percent agreeing with having fun now and worrying about saving later. Teenagers (15-19 years old) and those aged 30-39 years old come next – standing almost equal at 37 percent and 36 percent respectively. And a quarter (26 percent) of people aged 50-59 years old and 60+ years old also agree with living for today.

On the other end of the scale, the numbers showing a more ‘save now’ mindset increases fairly steadily with each age group. This starts at a third (34 percent) of both teenagers and 20-29 year olds and peaks at 43 percent of 50-59 year olds and 42 percent of those aged 60 and over.

Download the complete findings for each of the 22 countries, with breakdown by gender and age group.

The world is watching: Consumers' global mindset ahead of the 2016 Olympics

Considered Consumers have an Achiever mindset