Mid-sized German cities such as Straubing, Weiden and Passau once again surpass large metropolises in their ability to attract consumers from surrounding areas. According to GfK’s 2014 study on retail centrality in Germany, the quality of the local retail real estate in mid-sized cities is a key factor in drawing shoppers from outlying regions. 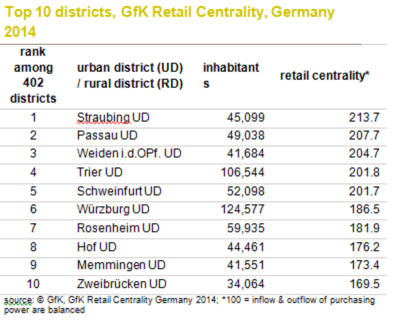 A city’s regional and geographic significance is an important driver of high centrality or retail drawing power: High and stable centrality ratings are achieved through a central geographic location with high population density in the surrounding catchment area and established preferences among the population regarding where they shop.

Shopping habits change relatively slowly, which means it takes years for trends to become apparent. The opening of large shopping and outlet centers in greenfield areas can significantly boost the overall centrality ranking of nearby smaller cities, as seen in the example of Zweibrücken, which moves into Germany's ten districts with the highest centrality rankings.

For years now, many German small and mid-sized cities have had a shocking number of vacancies.[1] Blame for this is often attributed to the expansion policies of international chains and consumers' preference for shopping in larger cities. But the reality is not that straightforward. Financially successful chain retailers are desperately seeking shops beyond the mainstream venues. But these efforts often founder due to shoddy retail real estate offerings, accessibility issues or unsuitable shop layouts. And when a retailer or project developer does decide to invest in retail real estate, banks and investors often reject the investment as a precautionary measure due to lacking on-site knowledge and benchmarks.

A negative chain of events is often unavoidable if a city cannot – or can no longer – meet the conditions required to attract retailers. This plight can also befall locations with good socio-demographic and purchasing power profiles. Thus, even the most promising locations are in danger of becoming problem locations.

Retail, city and investors are stronger when united
This vicious cycle can be avoided if all parties involved – such as city administration, retailers, project developers and financiers – agree on strategies for enlivening the retail scene. This approach allows for an equitable distribution of responsibility and a plan of action that has the support of all stakeholders. The involvement of impartial location and real estate experts is also recommended, especially when it comes to extensive projects and/or competing vested interests.

Today an ugly duckling, tomorrow a swan
While centrality is a very good gauge of current retail drawing power, locations with genuine potential can still have low centrality. For many small and mid-sized cities, maintaining vitality depends upon proactively modernizing the existing real estate according to guidelines from the city, determined in cooperation with real estate owners and retailers. Investigations from Great Britain – where the decline of small and mid-sized shopping cities has long been an issue – show that cities with historic architecture offer better conditions. But even the most appealing architecture is of no use without a good retail offering. Therefore, it's vitally important that product offerings be aligned with both the size of the catchment area and the characteristics of consumers in the region. This is true for both municipalities and retailers interested in establishing a presence at a given location.

Straubing is doing many things well to earn the top spot in the centrality rankings. Thanks to sound urban planning policies, discount retailers are concentrated at a limited number of traffic-oriented locations that clearly target consumer demand in the extensive rural regions surrounding the city. The very modest success of a shopping center in a more preferable but also more challenging urban location clearly demonstrates that ignoring consumer habits in Straubing and elsewhere results in wasted potential. Because of this, it has an above-average city center offering of top-tier clothing, shoe and jewelry retailers compared to other small to mid-sized cities. In a location with a young population such as Regensburg, offerings from the so-called "fast fashion" segment have become drivers of customer frequency: In recent years, this type of offering made it possible to compete with a large shopping center and modernize the older areas of the city. 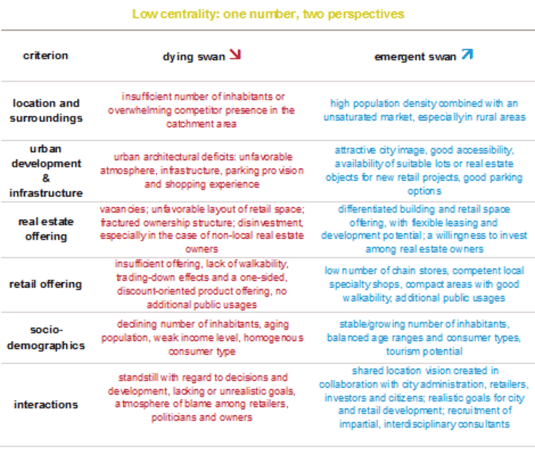 Some locations may appear to be very unpromising due to the current centrality rankings, but in some cases these sites are on the brink of becoming swans. Such is the case with Görlitz, a rural district with roughly 273,500 inhabitants located on Germany's eastern fringes. For several years now, Görlitz has been Germany's district with the lowest purchasing power, and with a centrality rating of 88.5. It also suffers from a significant purchasing power outflow. Despite this, the city of Görlitz is becoming a preferred shopping destination for visitors from neighboring Poland. These tourists are coming from a country with a much lower per-capita purchasing power than Germany. Each Pole has an average net annual income of €5,870, compared to €21,247 in Germany. But it tends to be the more affluent Poles who shop in Görlitz. A Jugendstil department store is planned in 2015 in the historic former Karstadt building. The project is a testament to how cooperation between a municipality, retailers and investors makes it possible to implement concepts beyond the mainstream and in spite of low centrality. Görlitz is just getting started. Without thorough analysis, even the best-intentioned retail real estate endeavors are doomed to failure. If a sufficient and steady number of customers cannot be attracted, the turnover required to meet overhead rental costs cannot be generated. Tenant changes, loss of rent and vacancies quickly have a negative impact on the site image and by extension on the entire financing structure.

Location development requires intuition and vision
Operating purely on the basis of data and breaking trends means reacting to change rather than proactively shaping it. It's crucial that every party involved think ahead at least 10 to 15 years so they can flexibly respond to emerging developments: The project developer acting as the building supplier, the retailer as the tenant and the city government as the urban planner. This is particularly true in these times of expanding online trade and increasing demands of consumers for convenience and an appealing shopping experience.

We know that it's a major challenge for developers and retailers to choose the right locations with good sustainability, and for cities and location associations to make sound decisions regarding the further development of a given municipality or location. That’s why it’s vital to recruit the expertise of impartial location experts with many years of experience. 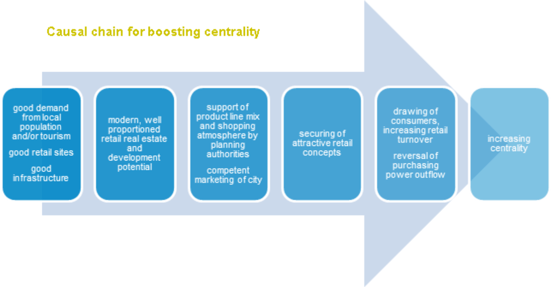 Finding the retail El Dorado
What is the key to identifying locations with sound retail concepts and sustainable cash flows? GfK's location and real estate experts use qualitative and quantitative methods that mutually reinforce one another:

Market benchmarks such as retail centrality, sales area provision and unemployment rates play an important role, but they should be viewed as an initial indicator that's part of a more comprehensive location evaluation. This information makes it possible to quickly and precisely compare various location options and alternatives prior to carrying out more detailed and time-consuming analyses. This approach often helps retailers to focus attention on promising regions for good locations. 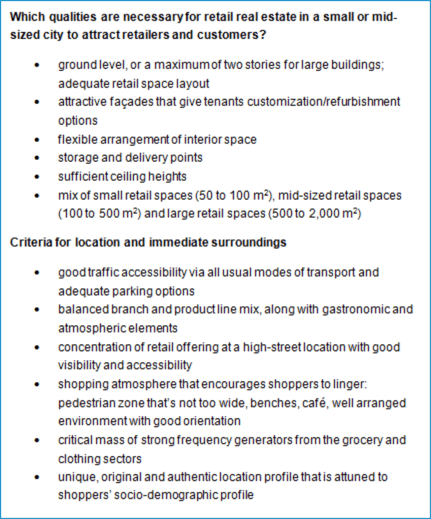 Even so, predicting a location's long-term prospects requires extensive knowledge of all factors and how they interrelate. This cannot be assessed through quantitative analyses and so remains the domain of retail experts who can evaluate the entire context and development potential. We look forward to using our many years of experience to guide you in identifying locations with good potential.

Three ways to navigate uncertainty in 2023