What shapes the one trillion-euro technical consumer goods market?

The global market for Technical Consumer Goods (TCG), excluding North America, remained static to deliver a total market value of €1.01 trillion. GfK expects TCG global sales growth rate of -0.2 percent for the full year 2019. However, the significance of experiences driving purchases and powering the one trillion euro market is becoming more important. These are GfK's findings for the global TCG market to be released at IFA 2019 in Berlin.

According to the GfK FutureBuy study, 65 percent of survey respondents agreed with the statement, “The consumer feels more in control than ever before when choosing the best products”. The same study reveals that 53 percent of consumers appreciate experiences more than possessions. GfK has identified five major themes that are a common denominator across sectors that drive these experiences and influence the purchasing decisions in the TCG category.

Nevin Francis, GfK expert for the TCG industry explains: “With point of sale data across a huge range of technical and durables categories, we can analyze sales trends and relate this to our consumer research to identify emerging patterns of behavior and attitudes. We are seeing the importance of experiences driving purchases and powering the one trillion euro market. Key trends like performance features delivering rich experiences; products simplifying our busy lives, and certain premium products, which are a reflection of the consumer’s aspirations – are all resulting in rich experiences. Whatever the reason for choosing to buy a product, being able to purchase it on any channel, from any location at any time of day or night is equally essential – hence the unstoppable rise of borderless shopping.”

Five trends that drive the purchase decision in the TCG category

Performance: Performance is all about the rich experiences delivered by high-end product features. Looking at the example of smartphones, feature combinations such as bigger display sizes (6-7”), cameras (20MP+) and increased storage (128GB+) appeal to consumers. Revenues from such a combination accounted for 16 percent of smartphone revenues or €33 billion in the first six months of 2019, up from 3 percent in the same period of 2018. These performance features enable messaging (75 percent) and capturing rich quality photos and videos (62 percent). These activities are identified as a growing priority as per consumer behavior analysis and it satisfies the consumer need to capture moments of their life and share it with others on-the-go. Another example is the major domestic appliances (MDA) market, where increased capacity is a growing trend. The large washing machine (9+ kg) segment is growing at 24 percent and commands a bigger share of consumer spending on MDAs.

Simplification: More than half (52 percent) of GfK Consumer Life Study survey respondents agree with the statement “I am always looking for ways to simplify my life”. Connected devices are at the forefront of the mind when it comes to meeting this need for simplification. The main challenge here is to propose purposeful, accessible use cases and improve the interoperability between smart devices. Providing relevant use cases for connected devices and simplifying day-to-day chores like cleaning and washing, top consumers’ wish lists. Robot vacuum cleaners, a key candidate for simplification, grew at 18 percent in terms of value from January to June 2019. Robot sales outpaced the overall vacuum cleaning segment, which grew by 11 percent and had a declining growth dynamic. The same holds true for washer dryers, which grew by 13 percent. The advantage of this appliance is that consumers can eliminate one household appliance by merging two, freeing up space in the home and removing the chore of hanging out the laundry.

Premium: A growing number of consumers are prioritizing experiences over possessions. More than half (53 percent) agreed with this sentiment in the GfK Consumer Life Study. There is a growing group of consumers who mirror their identity and aspirations in their use and ownership of these aspirational premium products, which are all about addressing a “Pamper Me” attitude. Ultra-thin notebooks and OLED TV’s are a few examples. Another “Me” segment that had experienced strong growth (at nearly +100 percent) are premium haircare appliances including dryers, stylers, and clippers priced at over 300 EUR. A growing middle class in developing economies has increased the number of early adopters and leading-edge consumers who are on a lookout for these new products – irrespective of the premium price point.

Borderless Shopping: More than one quarter (29 percent) of consumers choose a retailer for reasons of convenience according to the GfK Consumer Insights Engine. This reflects consumer’s desire for a location-independent and 24/7 shopping experience. They purchase on numerous channels and expect a seamless transition between them, from physical to online to mobile retail – anytime and anywhere. It is no surprise that one quarter of the global sales value of TCG was made through the online channel in the first half of the year. Online sales grew by +10 percent. However, over the past four years, sales of omnichannel retailers have grown by more than 60 percent, while pure players grew by 25 percent. This is because omnichannel shopping offers consumers the best of both worlds. This demonstrates the importance of creating borderless retail experiences.

Developing Economies: These regions have a growing middle class, which means high demand for TCG, when taking a multi-year perspective. These developing economies tend to have big swings also resulting in high fluctuation. In the past, these markets were looked upon as mere consumption markets but now they are maturing. Some of these developing economies developed their technological and manufacturing competencies enabling them to supply majority of its own home market demand and export as well. As per GfK point of sale data, an estimated 50 percent of smartphones produced by Chinese brands was exported to other regions (Emerging Asia, Africa, Western Europe and CE Europe, etc.) in the second quarter of 2019. This is up from 31 percent in 2016.

Though there is a disparity in disposable income amongst developed and developing countries, GfK consumer research indicates that people in the developing economies have similar needs and preferences driven by Performance, Simplification, Premium and Borderless Shopping.

GfK regularly collects sales data in more than 70 countries worldwide for the consumer electronics, photo, telecommunications, information technology, office equipment, and major and small domestic appliance segments through its retail panels. Data for North America are based on estimates. All figures are assuming a fixed Euro exchange rate.

Come and chat with our experts at IFA NEXT Hall 26 and in the GfK office at the IFA (Level 4, VIP2, Großer Stern).

GfK connects data and science. Innovative research solutions provide answers for key business questions around consumers, markets, brands and media – now and in the future. As a research and analytics partner, GfK promises its clients all over the world “Growth from Knowledge”. For more information, please visit www.gfk.com or follow GfK on Twitter: twitter.com/GfK. 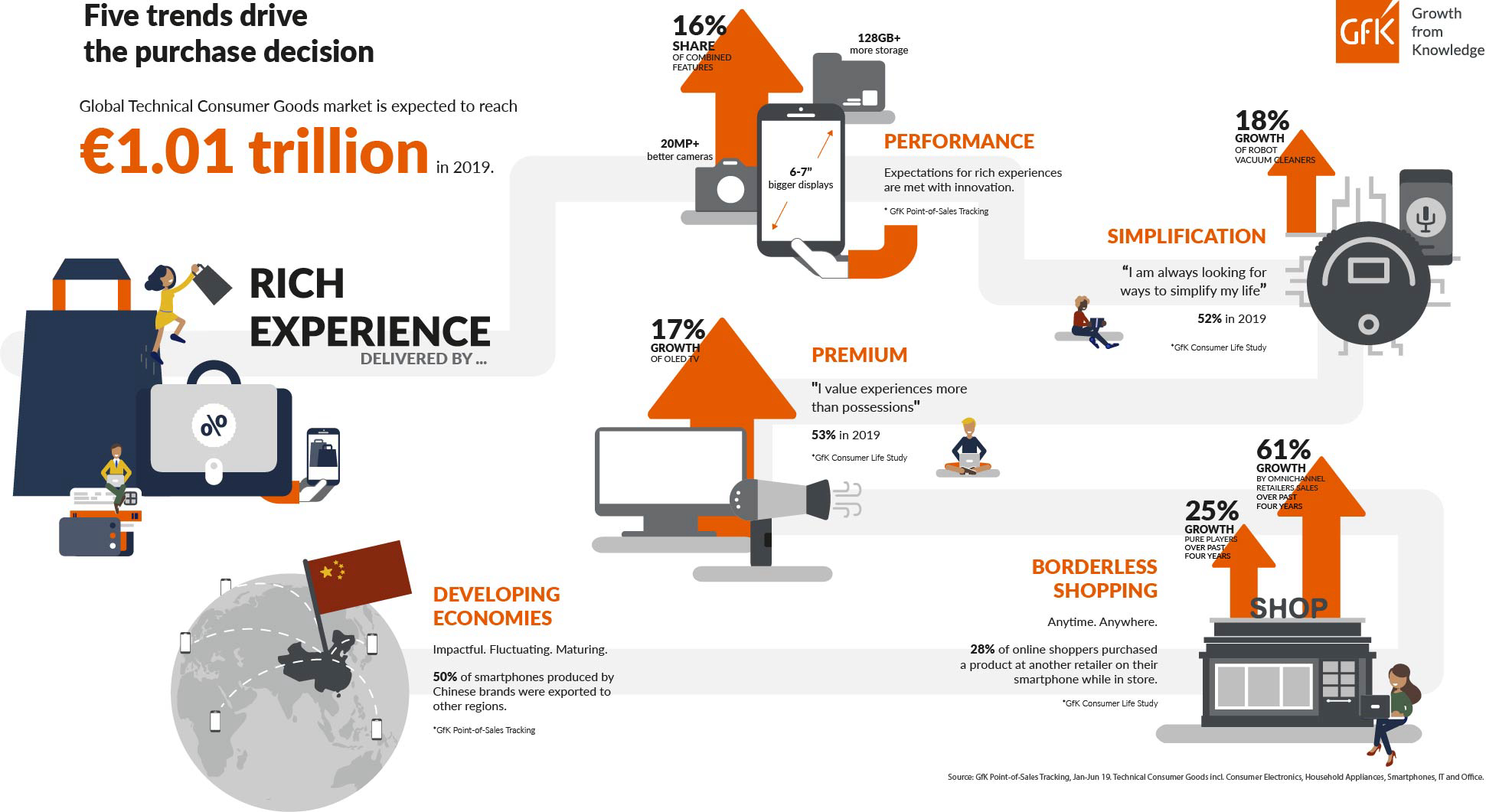