Despite inflation: Consumers in Germany decide to buy sustainably

Concerns about the environment are among the most important issues for consumers. For 74 percent of Germans, environmental pollution is a serious problem, and 69 percent fear climate change. Almost two-thirds (68 percent) of Germans demand that companies act sustainably. "Sustainability is deeply anchored in Germans' personal values," informs Petra Süptitz, sustainability and consumer insights expert at GfK. "In a list of 57 personal values measured annually as part of the GfK Consumer Life Study, sustainability ranks 10th place, ahead of values such as health and fitness."

The GfK Sustainability Index has been surveyed since February 2022. In February, the index stood at a value of 39.0. After the start of the war in the Ukraine, the index for March has increased by 3.3 points to 42.3. Sustainability has become more important for consumers during this period. In April, however, the influences of the Ukraine war, inflation and the general decline in consumer confidence showed in the GfK Sustainability Index. It fell to a level of 39.7. This is still a very stable value compared with the parallel dramatic decline in consumer sentiment, which fell to a historic low in the April survey. The GfK Sustainability Index in April shows that 81 percent of respondents are concerned about rising food prices, and 61 percent about rising prices for major purchases. This also led to a decline in willingness to purchase environmentally friendly products.

Last year, around one third of Germans paid attention to sustainability criteria when making major purchases. However, the planning of major purchases has changed significantly in recent months: While 35 percent of consumers in March still expected to make major purchases with sustainability in mind over the next 12 months, this figure fell to 25 percent in April. In the 18 to 29 age group in particular, the propensity to purchase sustainable products fell sharply.

In the case of fast-moving consumer goods (FMCG) such as food or hygiene products, as many as three quarters of Germans (72 percent) made sustainable purchases in March. In April, the proportion of those who plan to continue paying attention to sustainability aspects when purchasing these categories fell to 68 percent – but this is a much smaller drop compared to larger purchases. 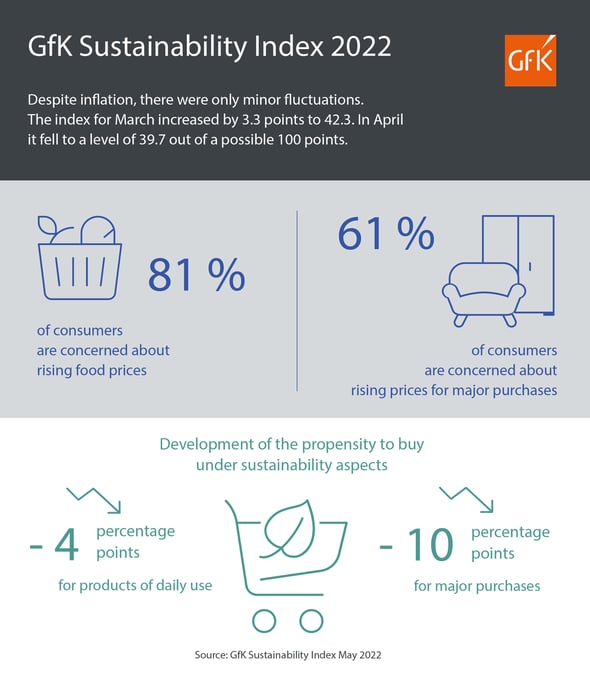 Consumers are willing to pay more for sustainable products

Overall, the decline in propensity to buy coincides with the reserve of German consumers identified by the GfK Consumer Climate for April – this also affects the purchase of sustainable products. Nevertheless, Petra Süptitz is confident: "Above all, consumers who are doing well financially and have few worries about their jobs are paying attention to sustainability and will continue to do so despite the current rise in prices. Germans' very high saving rates allow for this."

At the same time, the GfK Sustainability Index shows that willingness to pay higher prices for sustainable products has remained largely stable since February despite slight declines. "Sustainability will remain an important purchasing criterion despite major changes such as the Ukraine war. Consumers expect companies to act sustainably. The GfK Sustainability Index shows that they are willing to pay a higher price for this added value," Süptitz added. "Relying on a conventional, non-sustainable product portfolio now because of inflation and already high prices would be the wrong move for companies. Manufacturers and retailers should continue to position themselves in an environmentally friendly way – this is the right way to remain successful in the market in the long term."

The next GfK Sustainability Index will be published in August 2022.