Findings of the German GfK Consumer Climate Study for March 2019.

Overall, consumer mood in March 2019 looks somewhat more balanced than in the previous month. Economic expectations are increasing again. However, both income expectations and propensity to buy have decreased somewhat. For April, GfK is predicting a consumer climate value of 10.4 points, following a revised March figure of 10.7 points.

With the current increase, the collapse in economic expectations has been halted - for the time being at least. Moreover, the gap between the economic indicator and income expectations is continuing to close. This is because the latter has had to concede something of its very good level. The same goes for propensity to buy which has also taken hits. As a result, the consumer climate has suffered a slight setback following a pleasing start to 2019.

The decline in economic expectations has come to a standstill in March - at least temporarily. This indicator rose by seven points to reach 11.2. Prior to this, it had fallen five times in a row. The coming months will show whether this is the start of a reversal of the trend. Overall, the economic mood has lost nearly 35 points over the last 12 months.

Whilst consumers are certainly not assuming that Germany will fall into recession this year, they do see a noticeable cooling off of economic activity. Their worries are confirmed by the recently published forecast of the German Council of Economic Experts. This is due to the fact that the so-called "Five Sages" have lowered their original growth forecast for this year from 1.7 to just 0.8 percent. However, it is assumed that this weak phase will be only temporary since financial growth is again being forecast at 1.7 percent (source: www.sachverstaendigenrat-wirtschaft.de).

The downturn in this respect is due more to foreign than domestic economic factors. The lack of decisiveness regarding the nature and date of the UK's exit from the EU, as well as the growing trade conflict between the EU and USA are clearly creating ever more uncertainty among consumers. Barriers to trade, such as increases in customs duties, are currently creating a burden for German exports.

In contrast to the economic outlook, income expectations for this month have taken a few hits. After a loss of 4.1 points, income expectations are at 55.9 points. The indicator is still exhibiting a good level overall. A small increase can also be noted compared to the same period last year (+1.0 points). Therefore, the difference between economic and income expectations has decreased by more than ten points in a single month.

Despite current losses, the income indicator has managed to maintain its excellent position. It is above all the consistently good health of the German job market that is ensuring an optimistic mood with regard to income. Employment is increasing and ensuring that wages and salaries are also increasing noticeably. Pensioners are also benefiting from this trend, as their pensions are linked to wage developments in Germany.

Propensity to buy in wake of income expectations

Propensity to buy declined in March in the wake of decreasing income expectations. Following a decrease of 3.4 points, the indicator currently stands at 50.2 points. This is the lowest value for more than two years. The last time a worse value was measured was in December 2016 at 48 points.

Despite these losses, consumer mood among Germans remains decidedly positive. The stable condition of the job market combined with ever increasing employment is ensuring that consumers will continue to be willing to spend their money - especially since saving is not an attractive alternative in light of the current period of low interest.

Since the key consumer climate indicators - income expectations and propensity to buy - are currently having to take a hit, the consumer climate for April is 0.3 points lower than the previous month at 10.4 points. As a result, the indicator's positive start to 2019 has suffered its first setback.

We nevertheless assume that consumption will be an important pillar of economic development in Germany this year too. However, this is reliant on the assumption that the uncertainty caused by Brexit and the trade conflict does not increase further. Above all, any encroachment of this uncertainty on job market expectations should be avoided. This is because when workers get the impression that their job is no longer quite as secure as it was, they also become more cautious when it comes to their spending. In this case, the consumer climate would most certainly take a hit, and the 1.5 percent forecast at the start of the year would no longer be sustainable.

The next press release about the GfK consumer climate report is likely to be published on April 30, 2019, 8:00 am.

The survey period for the current analysis was from March 1 to 15, 2019. The results are extracted from the "GfK Consumer Climate MAXX" study and are based on around 2,000 consumer interviews per month conducted on behalf of the European Commission. This report presents the indicators in graphical form and provides predictions and detailed comments on the indicators. It also provides information on consumer spending plans for 20 areas in the consumer goods and services markets. The GfK Consumer Climate Study has been carried out since 1980.

GfK's forecast for 2019 is an increase in private consumption of 1.5 percent. Again, this does not concern retail sales but instead refers to total consumer spending.

Propensity to buy, like all other indicators, is a sentiment indicator. It queries whether consumers currently consider it advisable to make larger purchases. Even if they answer "Yes" to this question, there are two further requirements for making a purchase: the consumer must have the necessary money for such a large purchase and must also see a need to make this purchase. Furthermore, this only actually concerns durable goods, which also require a larger budget.

The results of the consumer climate survey are obtained from monthly interviews of around 2,000 people who are representative of Germany's population. This survey tool is subject to constant quality controls, particularly in order to ensure that it is representative. The particularly high quality of this survey is also demonstrated by the fact that it is used and approved for surveys in the field of empirical legal research (for example, the danger of confusing products). This means that the results have the status of an expert report and must be recognized in court. 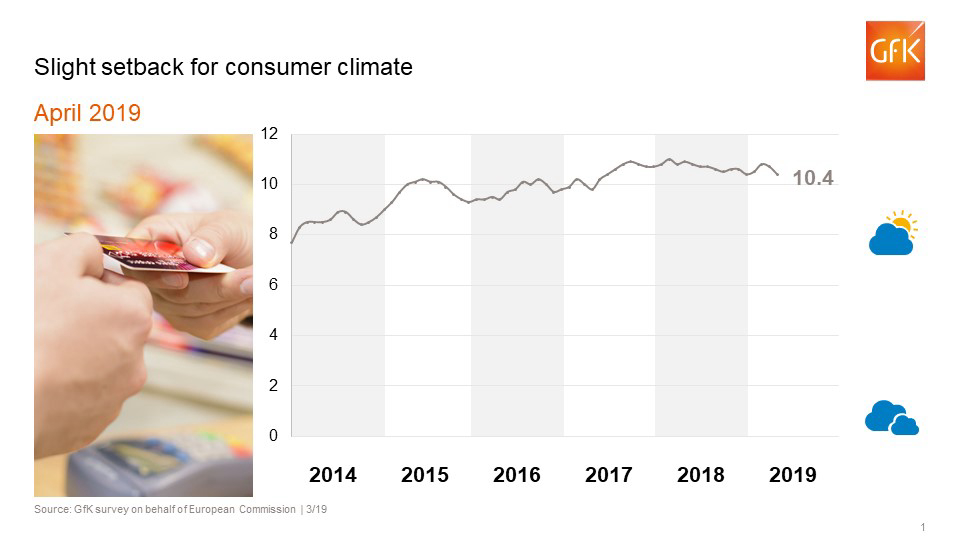