Nuremberg, May 10, 2016 – Looking at the GfK Connected Consumer Index ranking for the last two years, Hong Kong and North America (USA, Canada and Mexico) hold steady as having the world’s top two most highly connected populations.

It allows businesses to compare how connected the individual countries and regions are, in order to spot market opportunities across a range of industries. This includes areas stretching from digital device sales and content consumption to expansion of traditional technology into health and media and beyond.

Chile and Jordan leaping ahead in connectivity

Other countries that the Index reveals as having made a significant leap forwards in the past year, in terms of the connectivity of their populations, are Chile and Jordan.

Chile has climbed seven places from 27th place in 2015 to 20th place this year, and now stands just behind Italy, Ireland and Australia. And Jordan has jumped from 31st place last year to 23rd place – overtaking countries including Cyprus, Oman, New Zealand and Belgium.

Kevin Walsh, Director of Trends and Forecasting at GfK, comments, “We are seeing some macro trend increases in connectivity across all countries. For high growth markets, especially across the Middle East, Africa and emerging APAC, the dominant trend remains smartphone adoption. This is the primary device - and often the first device - for consumers to connect to data services. This trend is likely to remain dominant for the next two to three years as price reductions mean that over one billion consumers will be able to afford to connect with a personal device for the first time.

“For developed markets, primarily Western Europe and North America, the growth drivers have already moved to the next wave of consumer connectivity. Wearables are leading the way, together with connected cars – and both these are providing new consumer benefits. Smart home technology is an equally significant opportunity, but expected to be slower and steadier in terms of the consumer adoption curve.”

Individual country drivers are also significant. Chile, despite having a weaker economy, has a relatively favorable regulatory environment for investment, as well as high broadband penetration compared to the rest of Latin America. This has meant Smart TV sales again increased by over 20 percent last year, and GfK forecasts further growth of another 12 percent this year.

Walsh continues, “As technology markets mature, we are increasingly seeing that local country drivers are having a relatively bigger impact on growth, as opposed to global or regional trends – with consumers connecting in ever bigger numbers and different ways.”

View the full GfK Connected Consumer Index scores and five-year trends for each region and country. 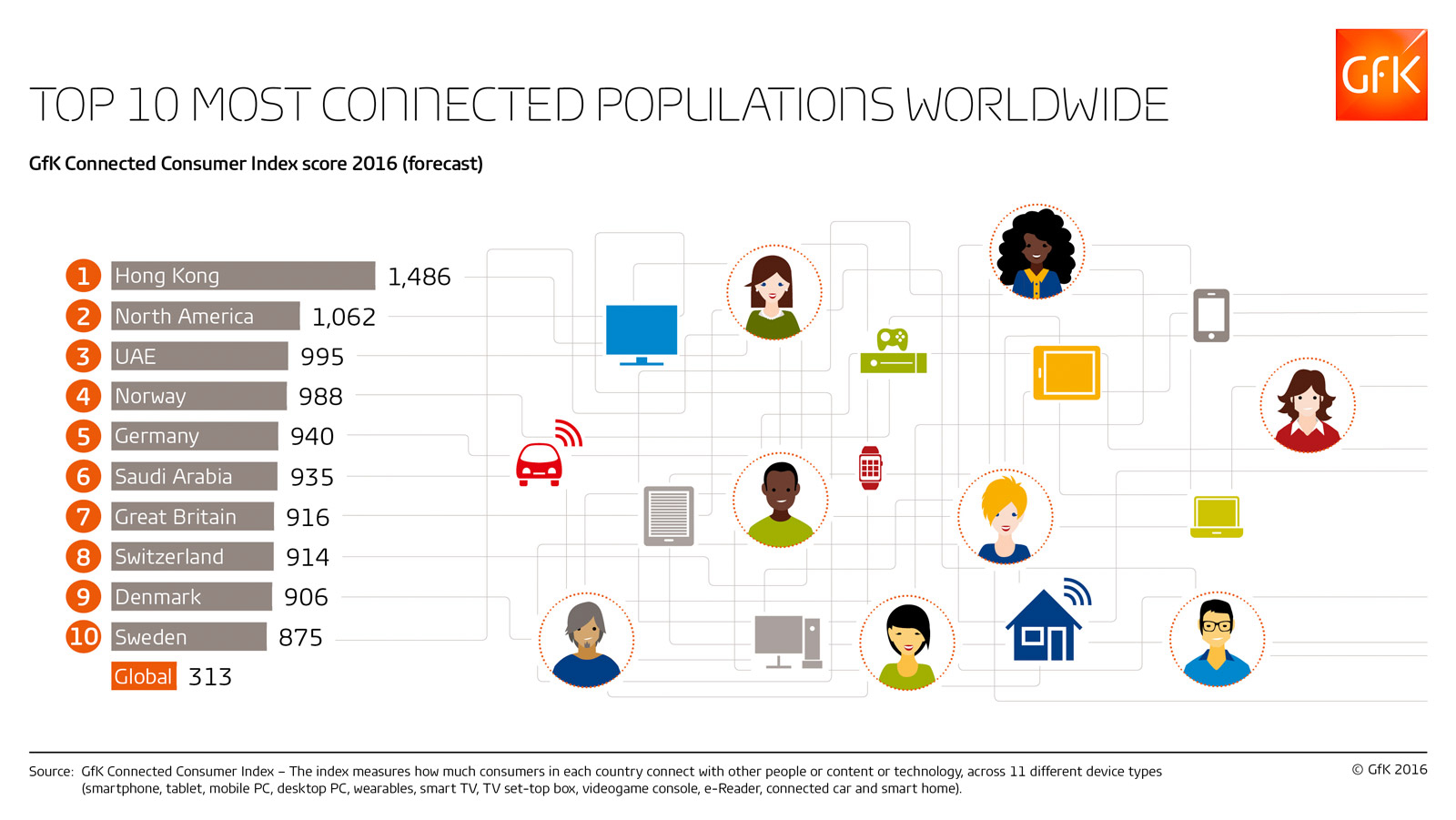 Which countries are the most highly connected?

GfK’s Connected Consumer Index provides a single measure of how much, and on what devices, consumers in each of 78 countries and 8 world regions digitally connect with each other and with digital content.

It enables a quick comparison of how ‘connected’ the different regions and countries are per capita, giving trends over the last five years and a forecast for the current year.