Concerns about plastic waste soar in Europe: A major worry for 1 in 2 consumers

Over 53 percent of European consumers name plastic waste as one of their three major environmental concerns, followed by climate change with 44 percent. When asked about their single biggest worry, 23 percent mention plastic waste versus 15 percent globally. Concerns are the highest in Slovakia, the Netherlands and Germany. These are findings of a recent GfK study on plastic waste conducted in 25 countries together with Europanel and Kantar.

Plastic waste concerns are definitely more prevalent in Europe, but also very much tied to the wider issue of climate change. An equal amount of Europeans (23 percent) names this as their single biggest worry.

At country level, major differences become apparent. In Hungary (31 percent) and Sweden (29 percent), climate change is a far bigger concern than plastic waste. In Russia, Slovakia and the Czech Republic, exactly the opposite can be witnessed. While plastic waste is the bigger problem for 17 percent of Russians, the number of Czechs and Slovaks is higher, at 20 and 27 percent.

Shoppers are acting to reduce the use of plastic

European consumers are doing what they can to mitigate the problem. More than eight in ten shoppers in the GfK survey say they use their own grocery bags (88 percent), use reusable cleaning utensils and cloths (84 percent), don’t buy plastic plates or utensils when entertaining (81 percent), or use a refillable bottle when going out (81 percent). According to the GfK study, respondents can be divided into four segments – depending on their degree of plastic avoidance and the significance of this topic for them. In examining their purchasing behavior, the segments are: "Dismissers" (those who don't do much to avoid plastic waste), "Considerers," "Believers" and "Actives" (those who do a lot to avoid plastic waste). In Germany and Austria, around one-third of households fall under the “actives” category. On the other hand, only 15 percent of this group are in the Netherlands and a staggering 6 percent in Russia.

The gap between caring and doing

As the above plastic avoiding habits are indeed widely adopted, others remain largely ignored. While on the one hand consumers bring their own grocery bags for their entire purchasing they for example still use plastic bags for fruits or vegetables. In the study, consumers were also asked to rate their plastic avoiding behavior for 17 different possible actions. Looking closer at twelve major European markets, consumers in Austria , Hungary and Germany claim to do the most. They undertake between a quarter (Hungary, Germany) and a third (Austria) more actions than in other countries. Consumers in the Netherlands, Poland and especially Russia are lagging behind in self-activation, with actions only reaching less than half the European average in the latter.

Manufacturers are most responsible for controlling and limiting waste

This might have something to do with who consumers are holding responsible when it comes to plastic waste avoidance. In the vast majority of countries surveyed, consumers state that they expect manufacturers to take the first action, followed by governments. Consumers see themselves and retailers at best only partially responsible for dealing with the plastic waste challenge.

The pressure on manufacturers is at its highest in Sweden, the Czech Republic and the Netherlands, with half of the consumers holding them accountable first. In Poland and Italy, consumers see tackling plastic waste much more as a shared responsibility. In Poland it is mainly between government (39 percent) and manufacturers (38 percent), in Italy in a triangle of government (30 percent), manufacturers (27 percent), and consumers (27 percent). Russia is a stand alone case, where as much as 65 percent state they feel the government should be the one to act. Without exception, retailers are let off the hook: in all countries they are seen as least responsible to act (average of 7 percent across countries).

Brands are not yet recognized for taking action

When survey respondents are asked which groups they feel already do a lot to reduce plastic waste, manufacturers get much less recognition than retailers. On average only 1 in 10 consumers can name a manufacturer brand. But even then, more than half are retailer brands. Retailers are therefore in a strategically interesting position, where not much is expected from them, but recognition comes easily.

Lenneke Schils and Martin Schlottmann, both GfK experts for Fast Moving Consumer Goods (FMCG), conducted the survey in April-May 2019 together.

Lenneke Schils explains: “There’s no doubt that consumers are extremely worried about plastic waste, and they feel they are doing a lot to reduce its use. As manufacturers are seen as being responsible for tackling the problem, it’s clear that there are opportunities to increase shopper loyalty if they can show they are actively reducing plastic waste”.

Manufacturers in particular need to speak to local consumers in a different way, taking the lead – but also asking consumers to share the challenge. Martin Schlottmann adds,  “With such fierce competition in today’s markets, the shared concern on plastic waste offers players the chance to differentiate their offer and build their brand message through an active program of plastic reduction. Consumers increasingly choose brands that reflect their values, companies that ignore this issue will find business in the next decade increasingly tough.”

The findings stated in this press release are based on GfK findings surveyed in twelve European markets: Austria, Belgium, Czech Republic, Denmark, Germany, Hungary, Italy, the Netherlands, Poland, Russia, Slovakia and Sweden. This survey is part of the 25-country global survey “Plastic Waste: who cares, who does?” in collaboration with Europanel and Kantar.

Please source all information to GfK.

GfK is focused, digital and a client-centric business. The company connects data and science and is in the unique position to leverage proprietary and third-party data to create indispensable predictive market and consumer insights as well as recommendations. Innovative analytics solutions provide answers for key business questions around consumers, markets, brands and media. As an analytics partner, GfK promises its clients all over the world “Growth from Knowledge”. For more information, please visit www.gfk.com or follow GfK on Twitter: twitter.com/GfK. 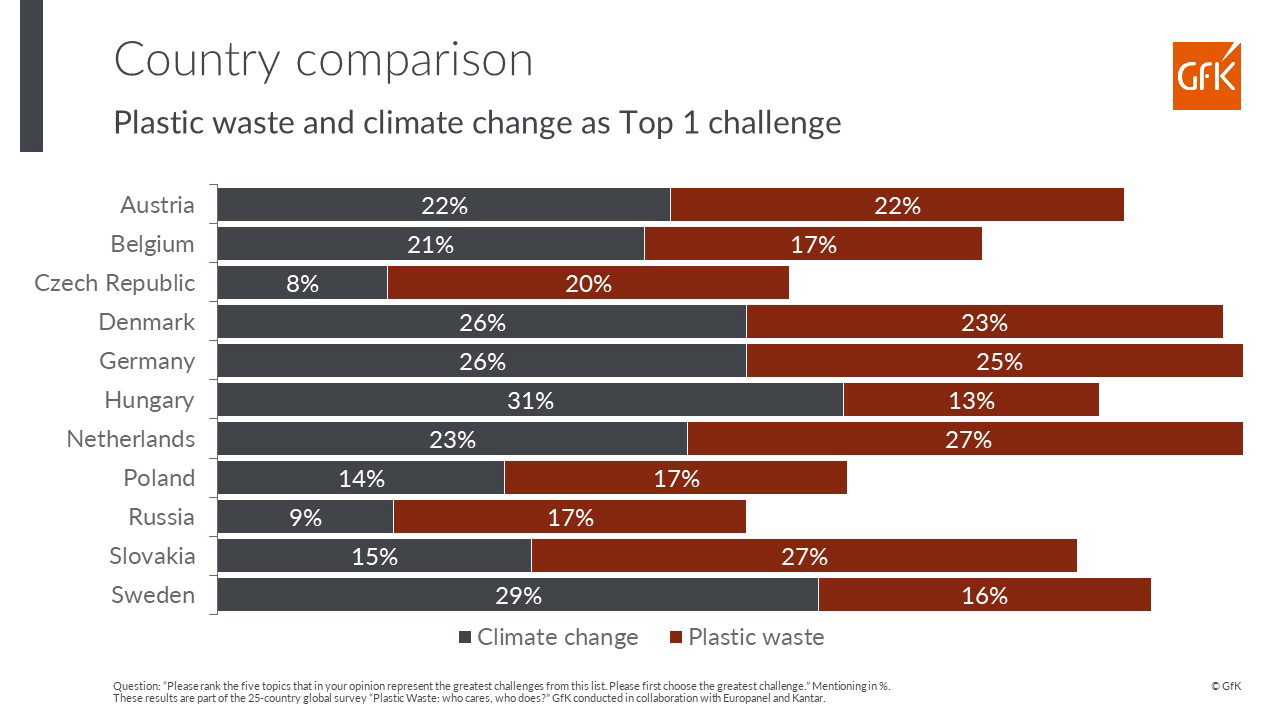