Amazon’s biggest visual production to date, The Grand Tour, starring Jeremy Clarkson, Richard Hammond and James May, shows clear appeal among UK SVOD viewers. GfK’s established SVOD content tracking and analysis reveals that the show was the most viewed title on Amazon in both November and December 2016, attracting the biggest audience reach for an Amazon show in the UK since GfK’s tracking service began in 2015.

Despite launching halfway through the month, The Grand Tour (TGT) became the most streamed show on Amazon in November 2016, accounting for eight percent of all the streams watched. The following month, that increased to 17 percent of all streams, proving TGT to be a clear winner, well ahead of the second placed title, The Man in the High Castle, which attracted 9 percent of all streams viewed.

Even more interesting, 45 percent of all Amazon users in December watched at least one episode of the program: the highest proportion of unique viewers ever recorded by GfK - not just for Amazon, but also across all other platforms captured by GfK’s tracker in the UK, which includes Netflix and NowTV.

If this were to be equated to actual viewer numbers, GfK’s estimates would put the total audience for TGT at around 2.3 million viewers, a figure slightly higher than the 2.1 million online adults recorded by BARB as watching Game of Thrones on Sky Atlantic during the same time period.

One key reason behind Amazon’s investment in TGT was not just to attract publicity and views, but to encourage sign up amongst a different target audience from existing subscribers. GfK’s analysis of the reasons people give for signing up for the service indicates that TGT has been successful in this aim. In November and December 2016, the top reason for sign up was ‘to watch original series made by the provider’. This was claimed by 22 percent of Amazon users, the highest percentage ascribed to this reason since June 2016, when the launch of BrainDead and Mr Robot 2 also sparked interest.

The value of Amazon investing in an exclusive deal with the TGT cast is also proven by the second most popular reason given for sign up: in December, this was ‘to watch exclusive content not available elsewhere’. Added to that, over half of those who said that they signed up to Amazon in order to watch a particular show, said it was TGT that they wanted to watch: Clear indication that TGT is doing the job it was commissioned for - namely, to attract new subscribers to Amazon’s video service.

As well as tracking daily viewing of all titles watched, GfK’s study asks additional questions about the content that users choose to watch. When asked why they started watching TGT, a clear majority of viewers (68 percent) said that they were fans of the BBC’s previous version of the show, and just over half (52 percent) claimed that they are fans of the presenters (Clarkson, Hammond and May). This underlines the continuing value of linear TV to these platforms, not just in providing entire series to fill the content of their libraries, but also in establishing the talent that SVOD platforms need, to attract new audiences.

Given the reported differences in program budget, did viewers perceive a difference in quality between TGT and its linear predecessor? Do they think TGT is better than the original?

Amongst those that watched TGT, over half (55 percent) say the show is ‘much/slightly better’ than the original Top Gear, with 45 percent claiming that TGT exceeds their original expectations. This is backed up with the show’s content rating of 8.6, measured by GfK’s SVOD tracking using a 10 point scale. This score is higher than most other big Amazon originals such as Bosch (8.5), The Man in the High Castle (8.3), and Transparent (8.2), and compares well against the average content rating for any show watched on Amazon, which currently stands at 7.9.

Christopher Smith, Senior Research Executive in GfK’s brand and customer research division, comments, “Our analysis proves that the high production costs for TGT are paying off, with viewers of the show agreeing that Amazon’s investment has been worth it. GfK’s tracking is unique as we are able to reveal what is being watched at title level, and this provides excellent insight of the return on investment that Amazon are gaining from their content acquisitions and commissions.” 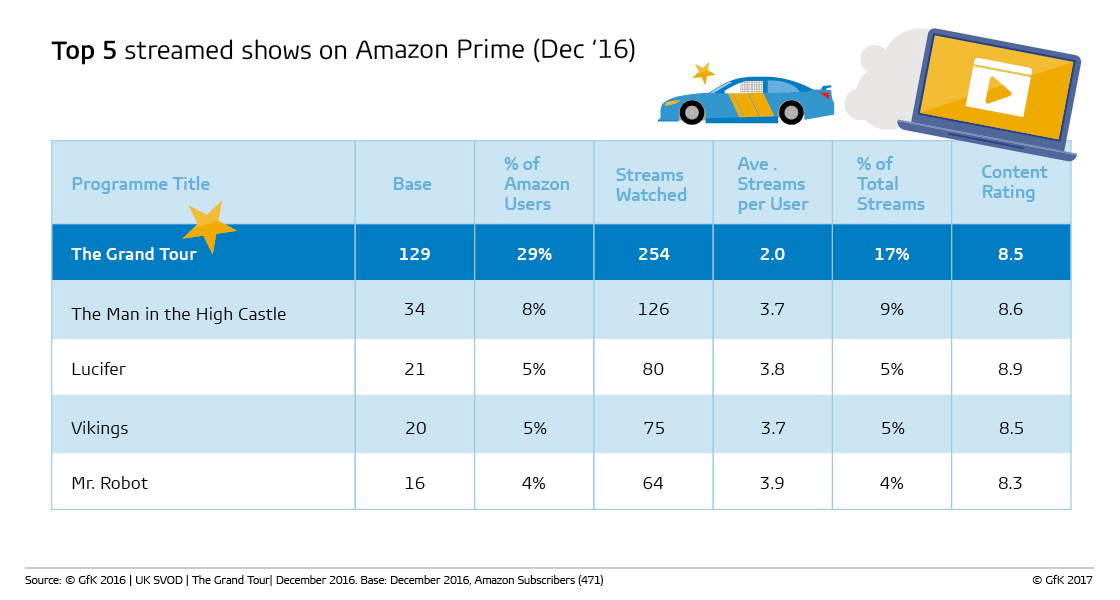 Top 5 reasons for signing up to Amazon Prime

GfK’s SVOD Content Tracker is a continuous survey of the content that SVOD users watch on a daily basis at title level and across all devices. The survey is based on respondent recall and thus circumvents the issues of passive tracking that cannot measure viewing ‘in app’ nor on devices such as Smart TV sets. Respondents fill in daily diaries of all their viewing activity as well as information on sign up, satisfaction and impact on other forms of viewing. Each quarter GfK collects information from around 2,500 respondents who are regular users of at least one or more OTT services in the UK.