GfK’s long-running Consumer Confidence Index decreased by two points to -12 in November. All five measures used to calculate the score fell in November, with the biggest drop occurring in the Major Purchase Index (down 6 points).

“Sadly, there’s no festive cheer in this month’s Consumer Confidence Index. This is the second time this year that consumer confidence has matched the worrying -12 score seen in July 2016 after the Brexit vote. This is also the 20th consecutive month where the Overall Index score has come in at a negative value – that’s not good festive news.

Household jitters following the recent interest rate hike, squeezed incomes, higher inflation, and economic uncertainty have dampened the consumer mood across the UK. Perhaps of most concern during this key Christmas trading period is the plunge in the Major Purchase Index (a sharp 6-point drop). Many retailers have been hit by the slowdown in consumer spending as households begin to feel the pinch and cut-back on their budgets. The confidence trajectory is unquestionably negative and sadly no amount of tinsel or baubles will change it. We need some big, positive economic good tidings to reverse this downwards trend – some snap we can put into our Christmas crackers. But where will the Index be next month?”

The Overall Index Score in November is -12. All five measures used to calculate the score fell in November, with the biggest drop occurring in the Major Purchase Index (down six points).

The measure for the General Economic Situation of the country during the last 12 months has decreased three points to -32; this is seven points lower than November 2016. Expectations for the General Economic Situation over the next 12 months have decreased two points this month to -28; this is six points lower than this time last year.

The Major Purchase Index has decreased six points this month to -3; this is eight  points lower than November 2016.

The Savings Index has increased to +8 in November; this is 19 points higher than November 2016. 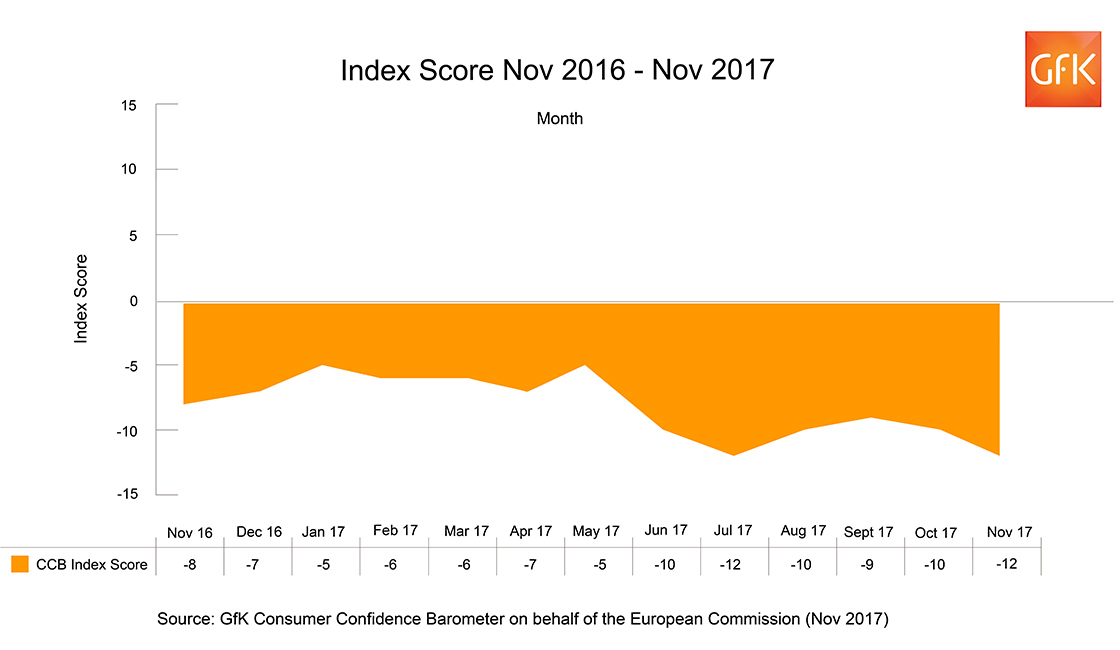