GfK’s long-running Consumer Confidence Index has increased by one point this month to -7. Two of the five measures saw increases in December with the remaining three measures decreasing.

“The past 12 months were a really turbulent year for confidence in the UK as consumers reacted to the dramatic economic and political turmoil of 2016. After a positive start to the year [January 2016, +4] the index plunged rapidly in post-Brexit Britain [July 2016, -12] with the recovery to September then evaporating by year end to limp home at -7 for December. While consumers remain relatively confident about their personal financial situation, confidence in the general economic situation for the UK has collapsed in the face of uncertainty about the future both at home and abroad. Despite everything, consumer resilience is shown by strength in the major purchase index, the ‘now is a good time to buy’ mantra being reflected in strong retail sales growth. Looking ahead to 2017, against a backdrop of Brexit negotiations, the decline in the value of sterling, and the prospect of higher inflation impacting purchasing power, we forecast that confidence will be tested by the storm and stress (Sturm und Drang) of the year to come.”

The Overall Index Score has increased one point this month to -7. Two of the five measures saw increases in December with the remaining three measures decreasing.

The Major Purchase Index has increased seven points this month to +12; this is five points higher than this time last year.

The Savings Index has increased six points to -5; this is five points lower than December 2015. 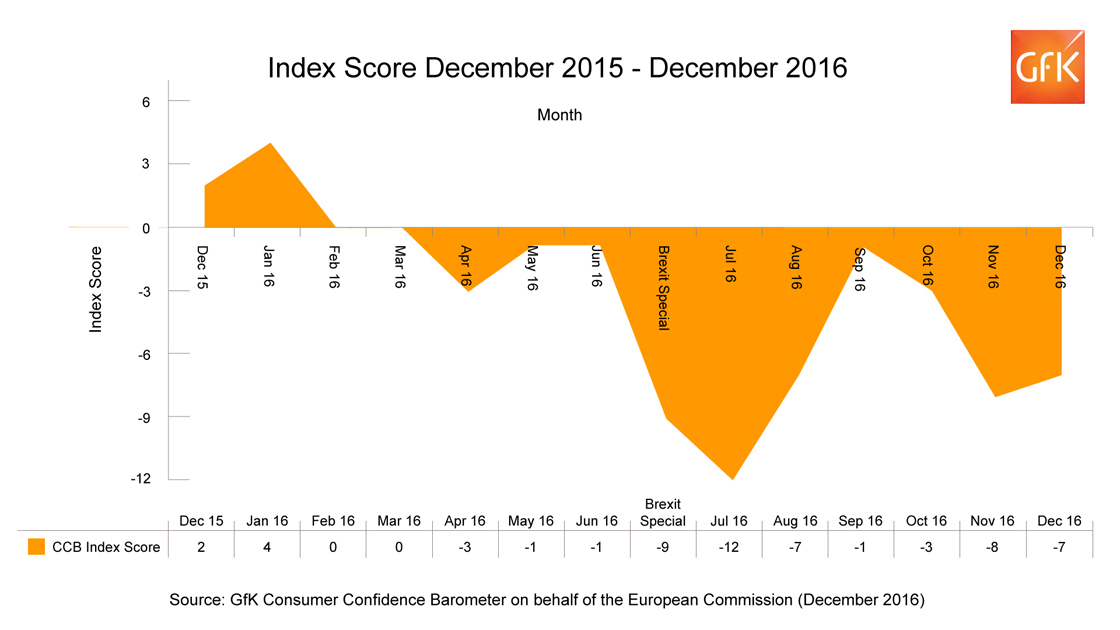