With an estimated value turnover of 140 billion USD in 2019 and projected robust growth, the video games industry has become a giant in the entertainment business. Gaming is about experiences. Experiences are for consumers. And in the world of gaming, “everybody can be somebody”. For many of the millions of gamers around the globe, gaming is a lifestyle. It offers a way of identifying themselves and expressing emotions, of being connected and belonging to a group. Linear gaming has evolved into multi-platform gaming ecosystem, on PC, console and smartphone/tablet, streaming and watching on video platforms, all of which are integral to gamers’ engagement.

The importance of mobile gaming

Smartphone and tablet developments provide a good understanding of multi-platform gaming and in particular, the current importance and future potential of mobile gaming. As smartphone displays grow, tablets needed to adapt and offer the bigger screen sizes too. In EU 15, over 5.7 million tablets above 9” were sold in the first half year of 2019, while smartphones reached over 17.2 million units in the same period. Although these devices aren’t currently suitable for high-end gaming, there’s the promise that this will change in the near future. Overall, these numbers demonstrate the current importance and further potential of mobile gaming. 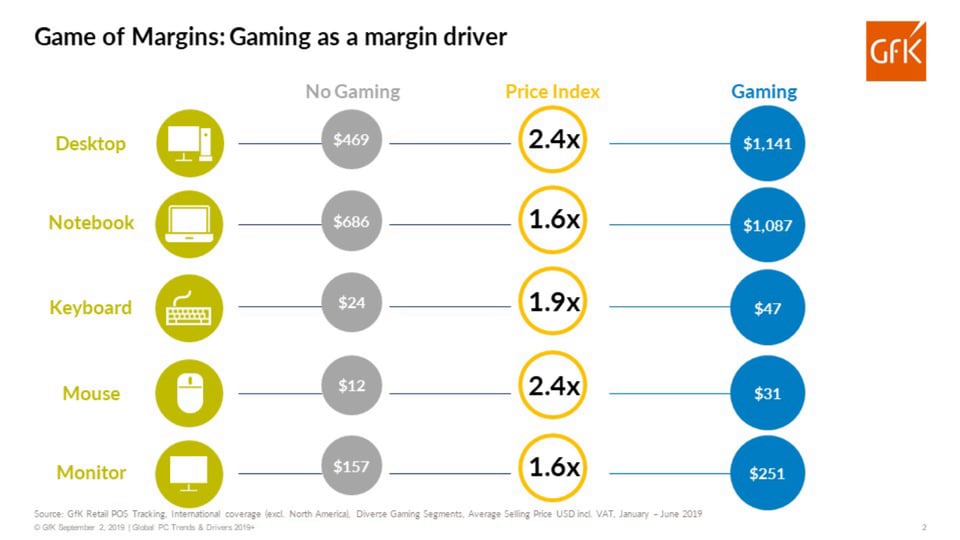 PC hardware as a gaming ecosystem

When it comes to PC gaming hardware, we’ve experienced an evolution from a niche segment to a gaming ecosystem over the last few years. Turnover of over 5.3 billion euro, generated by gaming PC hardware in the first half year of 2019, exceeded the turnover for the whole of 2016 . In 2018, the turnover of consoles in EU15 fell slightly by -1 percent to 3.7 billion euro. Although over 14 million consoles were sold in 2018, they still recorded a decline of -4 percent. Sales of consoles dropped further in the first half year of 2019, recording a double-digit decline. At the same time, gaming notebooks generated 1.1 billion euro in EU15, which corresponded to a growth of +18 percent. However, revenue declined by -3 percent from January to June 2019, indicating signs of maturity. 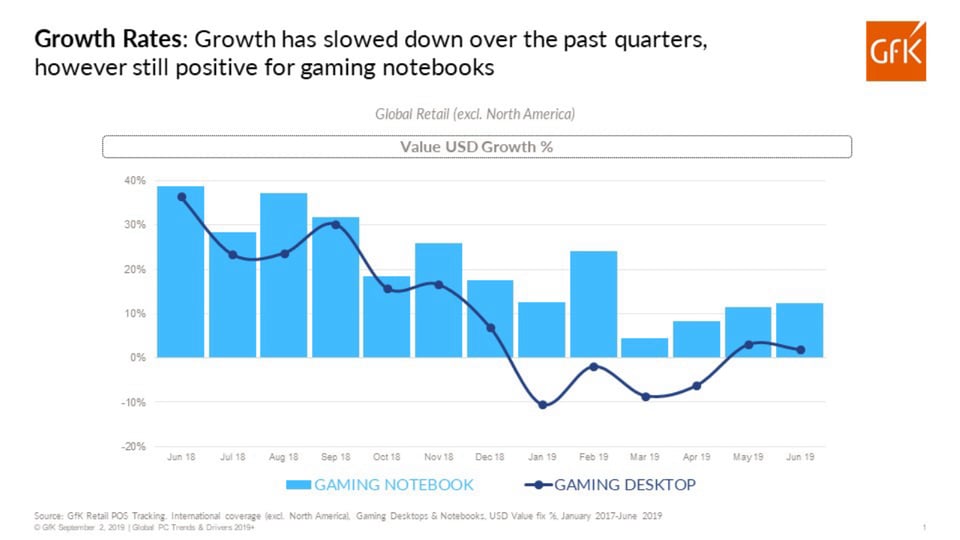 During the same period, gaming monitors recorded another strong growth globally up +42 percent, while monitors with at least 100 Hz refresh rate rocketed, growing by +70 percent. On average, gaming desktops cost 2.4 times the price of non-gaming ones, while gaming notebooks and gaming monitors achieve a price ratio of 1.6 times. Overall, gaming hardware offers an attractive price tag and margin to the industry and retailers. However, the current business model may well experience the transformative effect of the on-demand subscription-based model.

Gaming reaches for the cloud

With an estimated value turnover of 140 billion USD in 2019 and a projected robust growth, the video games industry has the full interest of the tech sector. Consumers are already used to streaming entertainment services from the cloud, and it seems it’s time for the gaming ecosystem to reach the cloud. In the last year, more focus has been devoted to cloud gaming, often referred to as the “Netflix for games”. The promise of delivering a high-end gaming experience on any device without the need for high-performing hardware may have the power to disrupt the gaming industry.

The importance of WiFi and 5G

Currently, connection speed is perceived as the possible bottleneck. This is especially true when it comes action games. Here, where every millisecond might be decisive, having an ultra-fast and reliable connection is essential - otherwise, hardcore gamers will be disappointed. Casual gamers, on the other hand, may still accept a time-lag of a few milliseconds. Combining cloud capabilities together with the technological promise of 5G may offer a technology leap to low-latency gaming, particularly when it comes to screen-independent gaming and gaming-on-the-go. In addition, with the advent of cloud gaming, the cost barriers to play may reduce, and more people around the globe could be encouraged to join.

No matter what technology innovations are available, ultimately, the consumer has the final word. Gaming gear and hardware have been a key enabler for rich gaming experiences and, although the landscape might change in the future, one thing will remain consistent – the desire for immersive game play.

One topic with global importance that we expect to become more relevant for gaming is sustainability and energy efficiency in the form of green gaming. The energy consumption of gaming devices is already significant and with increasing numbers of people playing more often on powerful devices and servers, this will only grow. Based on a GfK Consumer Life survey from this year, nearly 60 percent of people strongly agree that brands and companies have to be environmentally responsible. Although its main domain is virtual worlds, gaming has the potential to be very impactful in the real world.

Want to know more about this topic?