Key findings of our European Retail in 2016 report

Good news first: We anticipate real-value retail growth for 2016, albeit at a slackened pace. My team within our Geomarketing division recently carried out a comprehensive analysis of the European retail scene in 33 European countries. We reviewed 2015’s key retail indicators such as purchasing power, retail share of private spending, inflation and sales area provision, and arrived at an overall positive turnover prognosis for Europe in 2016. But, naturally, there are large differences between the individual regions in Europe.

Here’s a look at our key findings[1]:

Purchasing power in 2015: The economy grew and unemployment fell in most countries in 2015. This development is reflected in the nominal purchasing power figures, which increased in the European Union by an average of 3.7 percent compared to the previous year. This gave each EU citizen an average of €15,948 for consumption, rent, savings and retirement contributions.

2016 turnover prognosis: The solid store retail business from last year will continue in 2016. For the EU-28 countries, we forecast somewhat decelerated progress, with a growth of 1.1 percent (based on nominal euro values). There will be especially positive developments in Romania (+7.2 percent) as well as continued progress in the Baltic States (+3.8 percent to +4.9 percent), which are gradually catching up with the more mature markets. We expect a robust dynamic in store retail in Sweden (+4.8 percent) and Spain (+3.7 percent). 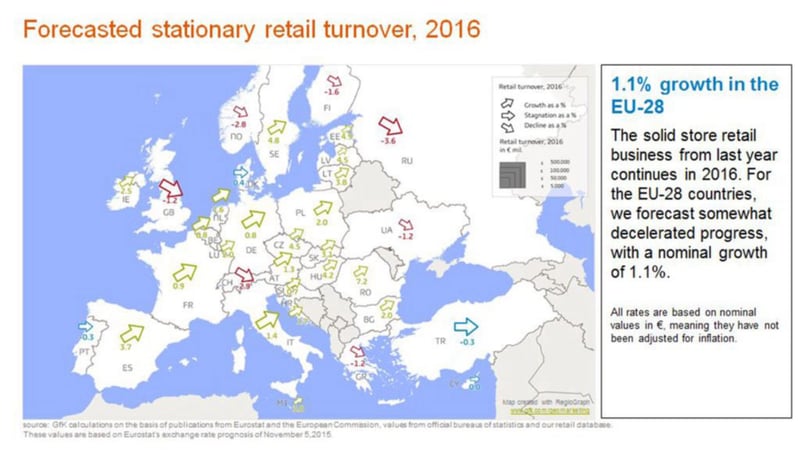 Retail share of private consumption: In 2015, European consumers enjoyed low energy and fuel costs as well as a good economic situation and an increase in private wealth in many European countries. Even so, the main beneficiaries of these positive conditions were areas other than retail. Consequently, the trend of retail’s declining share of private consumption also continued in 2015. The average quota for the EU-28 is 30.4 percent. While consumers have more money for purchases, they predominantly spend these funds on services, traveling and recreational activities rather than on retail. These expenditures translate to less money available for retail consumption.

Inflation: Consumer prices remained constant (+0.0 percent) in 2015. This is a rare situation for industry and retail as well as for consumers. In February 2016, the European Commission forecasted a 2016 price increase of 0.5 percent, driven by a more expansive central bank policy and an economic upswing. But the inflation expectations are dampened by the low prices for crude materials. A price deflation actually occurred in many European countries in 2015. But for 2016, the European Commission forecasts declining consumer prices only in Slovenia (-0.3 percent), Romania (-0.2 percent), Lithuania (-0.1 percent) and Bulgaria (-0.1 percent).

Sales area productivity: Over the past year, sales area productivity in the EU-28 increased by 2.7 percent to just under €4,200 per m² of sales area. This is good news for stationary retail, which was able to make gains for two years in a row after years of declining performance. The online dynamic slowed in more mature markets, and store retail is gradually adjusting to the new conditions. Unprofitable shops were closed as part of retailers’ digitization of their offering and pursuit of omni-channel solutions. The highest sales area productivity values are traditionally in Northern Europe, Switzerland and Luxembourg, while the lowest are in Eastern and Southeastern Europe. But the latter countries are continually gaining ground.

Understanding consumer preferences and site quality is key to success

As the study shows, no two markets – or even two locations – are the same. When choosing potential retail sites, retailers must get clarity on the market potential of the location – both now and over the long term. In order to gauge the potential accurately, it is important to understand the shopper types, profiles and trends that influence the consumer behavior and thus turnover potential for a particular product group at a particular location. Understanding your regional clients and target groups is a major success factor in any sales channel, whether online or offline.

[1] The full study can be obtained as a PDF at www.gfk-geomarketing.com/european-retail.

A close look at the retail situation in Europe