4 considerations for innovating the automotive industry

I recently chaired the World Autonomous Vehicle Summit in Stuttgart, Germany where speakers and attendees peered into their crystal ball to understand what the future holds for the automotive industry. How do manufacturers innovate to embrace the future? What does ‘innovation’ really mean in terms of success? What impact will autonomous driving have on the industry? I reflected on these questions as applied to recent technological announcements and published research. Several themes emerged from these which resulted in four considerations for those innovating the next auto frontier.

1. Educate consumers about the benefits of your in-vehicle innovation

Data from our Automotive Technology Insights Report, The future is here...can you see it?, found that consumers are factoring in-vehicle technology as a purchase decision attribute. Moreover, the research revealed that new car intenders would be willing to pay more for new car innovation, such as emergency braking, self-parking control and pre-incident preparation (e.g., automatic seat belt tightening).

On the downside, awareness of what the new vehicle features actually do is quite low. An example of a perceived benefit versus reality was highlighted when the study revealed 65% of respondents did not find autonomous driving appealing if it cannot be used after drinking alcohol. This suggests the need to educate consumers about the benefits and not just list the features as bullet points.

It should be no surprise to anyone that we are at the cusp of great changes in the auto industry. Just a few years ago, the introduction of new vehicle innovations used to be dependent upon the chassis of the car and with the traditional seven to eight year lifecycle, innovation took time. Today’s chassis is more akin to a computer where the product development lifecycle is flexible and fast.

The challenge for manufacturers with this faster lifecycle is to ensure the technology features will work and leapfrog them over competitors. Involving users throughout the development process will result in technology that meets user needs, in a way that they expect it to work and where they want to use it. Stand out from competitors by delivering a great user experience.

These differences highlight the need to address attitudes when launching products into markets. In this case, manufacturers should address the fear and anxiety in the U.S., U.K. and German markets. But in Brazil and China, perhaps call out the ride-sharing benefits.

4. Design the car of the future as a service, not a product

An interesting result from our Future of Auto study was around market segmentation. The six segments of car buyers were: 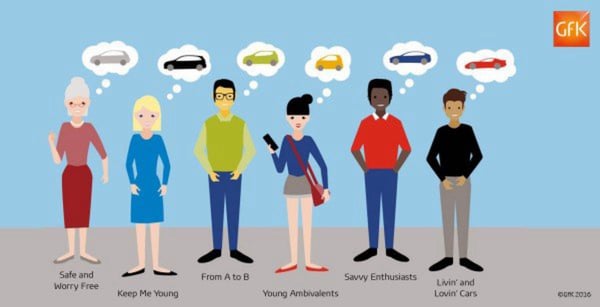 Of the six segments, the two that bubbled up for me were Young Ambivalent and Living and Loving Cars.

The Young Ambivalent segment is the one that should scare the auto industry. These are consumers who don't care. While the data only revealed this was 19% of the market (relatively low), when we looked deeper, two thirds of Millennials made up this segment. That is almost an entire generation who are ambivalent to car ownership. And, I don’t have to look too far to understand this – I remember how long it took my son to get his driver’s license.

I am in the Living and Loving Cars segment. I don't want someone driving my car for me or carpooling. When I asked the conference audience, who were largely from Germany, their feelings about carpooling and car sharing were very negative. People, like me, could not fathom letting someone else drive, eat and smoke in their car.

And I’m not the only one thinking this. In June 2015, Deutsche Bank downgraded Progressive because they see this change. “We believe the concurrent rise of instant ridesharing and autonomous vehicles presents real questions as to whether there will even be an auto insurance industry as we know it in twenty years…Vehicle utilization will rise and cars on the road will decline as one car can serve the driving needs of multiple travelers per day, which, in-turn, means fewer cars,” said their analysts.