The industry has to roll with the punches: Video On-Demand is in Demand in Sweden

The start of any year at GfK provides an opportunity for us to analyze and reflect on the previous year’s media consumption behavior, and consider where the trends might be heading. What we see is that media consumption is becoming more complex with “connected” consumers dictating complexity through new behaviors and habits. In Sweden, going from live TV to time-shifted and video-on-demand (VOD) viewing – sometimes on more than one internet-connected screen – is becoming the new normal.

So, what’s going on in Sweden?

Things are moving apace in the Swedish TV and video market as the country, as well as others around the world, has witnessed the impact of the Internet on TV and video viewing. Even film distributors and retailers are realizing that the viewing public has found it much easier to use the virtual video store within their set-top box instead of heading out in the bitter cold weather to rent or buy a movie to watch at home (just ask the residents of Karesuando where even traffic freezes when it is minus 40°C outside).

• Sharp increase for watching video on the internet

According to the annual report from Stiftelsen för internetinfrastruktur (The Internet Foundation in Sweden, promoting the positive development of the internet for the benefit of the public), 70% of internet users (91% of all Swedish adults) watched film and video on the internet in 2015 – a sharp increase from 52% the previous year. When cross-referenced against GfK’s own data, that shows sales of catalogue video films falling by 19% over the same period, we can really see the appeal of movies on sites like Netflix and HBO – easy-to-access and easy-on-the-pocket.

• Subscription VOD and smart TVs are in the driver’s seat

Research from GfK indicates that a quarter (26%) of the population uses Netflix and 39% use any other form of VOD or subscription video-on-demand (SVOD) service. Indeed, smart TV is the most popular screen for watching Netflix, more so than the laptop, thanks to easy access to the Netflix app on-screen and the high definition viewing experience.

Smart TVs are certainly contributing to the growth of VOD viewing. GfK data tells us that 64% of all TV sets sold in Sweden in 2015 were smart TVs, which puts the country ahead of many others including, for example, Germany (60%), the United Kingdom (54%) and Italy (34%). 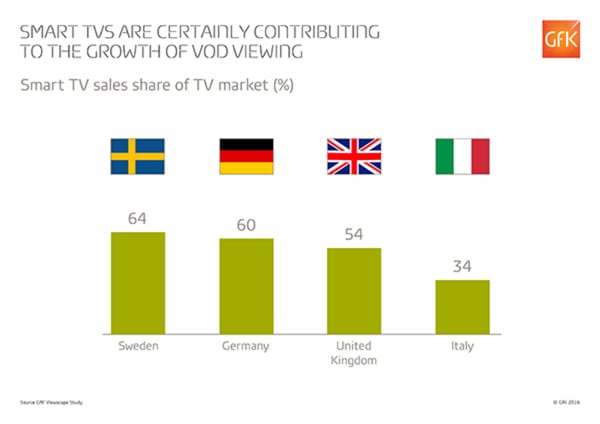 Viewing is moving to a self-curated rather than scheduled activity. To some extent, just like the old boxing expression, the industry has to roll with the punches. An unstoppable digital force is meeting a very movable medium and it is the online retailers and on-demand platforms that are adapting most quickly to change. The video retail industry is having to find new business models and fast. It has no choice owing to a 62% drop in the physical video market in Sweden since 2009.

Online video is here to stay. The television set is no longer limited to delivering linear television and viewing is still predominantly a social activity done at home. The flexibility of choice is leading to more rather than less video consumption. Video content provides social glue and a range of information and entertainment. So long as there are binge-worthy, on-demand movies and television shows to watch, then video in all its forms will remain in demand and provide a reason to stay in on a cold Swedish evening.

Please email me at Lars.Sudow@GfK.com to share your thoughts.

How brands can embrace premiumization to outpace deceleration