What makes us want to look good?

On average, we spend 4 hours a week on bathing, shaving, getting dressed, doing our hair and putting on make-up (some of us) 1. This combines almost five hours a week for women and just over three hours for men. But what are the big motivating factors that drive us to want to look our best?

Well, when it comes to major (rather than minor) reasons – the most popular motivation is to feel good about ourselves. This was cited by 60 percent of the 27,000 people interviewed, followed by making a good impression on people we meet for the first time (44 percent) and setting a good example for our children (40 percent).

These top three reasons hold true for both men and women. But the number one reason – to feel good about ourselves - resonates more strongly with women (67 percent women, versus 52 percent men), while the making a good first impression and setting a good example for our other two reasons are cited by almost the same percentage of men as women. 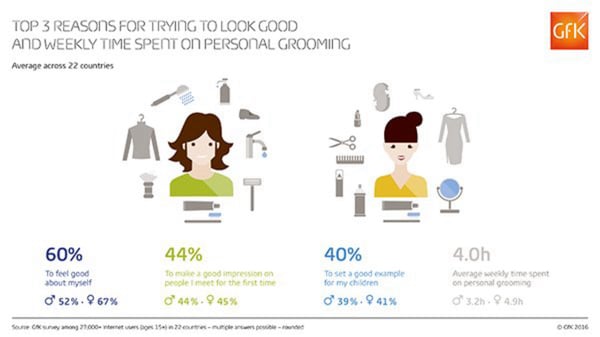 For men, the fourth and fifth most popular major reasons for trying to look their best are to please their spouse or partner and to make a good impression on people of the opposite sex or those they find attractive (37 and 36 percent respectively).

By contrast, women are more motivated in trying to look their best by the wish to express their individuality and because it makes them feel in control (both standing in fourth place equal, at 40 percent each).

All age groups agree that feeling good about themselves is the leading major motivation for trying to look their best. But when it comes to the next most popular trigger, the age groups differ.

For those aged 30 and above, setting a good example for their children is consistent across all age groups as the 2nd most commonly cited motivation. And when it comes to those aged 50 and over, pleasing their spouse or partner makes an appearance as their 3rd most popular major reason.

Italians, Argentinians and Americans spend most time on personal grooming

Download our free data charts showing full findings for each of the 22 countries.

Hybrid Future: How Tech & Durables brands can capitalize on the new work from home reality