Let’s now look at how purchasing power data can help a consumer electronics retailer who sells products via chain stores throughout Europe. Optimally placing and managing these stores requires precise, up-to-date knowledge on how the product potential tracks across regional markets. The retailer happens to know that Europeans have roughly €9 trillion to spend in 2015, but this information alone is useless. This is where our purchasing power data comes into play. Our data offers a highly textured breakdown of the geographic distribution of this wealth. It’s not enough for our retailer to work with composite figures and rough averages, because actual purchasing power amounts fluctuate dramatically from country to country, municipality to municipality, and even postcode to postcode. 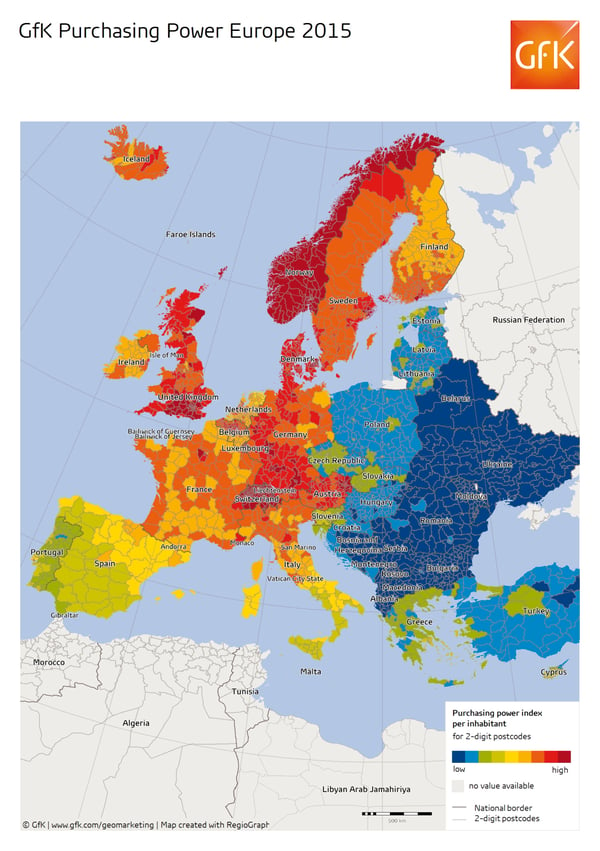 So where does the retailer start? A good first step is to assess the relative wealth in the areas around the chain stores. This has a direct effect on how the retailer should optimize the product mix for each location. A quick look at the data reveals that Liechtenstein is a veritable purchasing power dynamo, with 4.5 times the average disposable income. Our retailer has two stores in this area, so a good move would be to offer a larger selection of high-end products at these locations. If the two stores are not fully tapping the available potential, the retailer can consider opening up some additional stores in this country, strategically positioning them in municipalities and postcodes with especially high purchasing power.

The retailer also has stores in Central European markets, such as Poland, which has shown signs of rapid retail growth. But unfortunately the retailer’s stores in that country have not be able to capitalize on this trend. Another look at the data shows why: All of the retailer’s stores are in districts with below average purchasing power by Poland’s standards. The retailer now has several options. It can open stores in some of the districts with higher purchasing power, such as Sopot, Piaseczynski or Warsaw, the latter of which has almost 83 percent more purchasing power than the rest of the country. Alternatively, the retailer can adjust its product mix at the existing locations to better appeal to the surrounding demographic. Up until now, the retailer has been using the same or similar marketing campaigns for all of its stores. Using the purchasing power data, marketing campaigns and POS promotions can now be tailored on a store-by-store basis to the income level and purchase affinity of the nearby population. 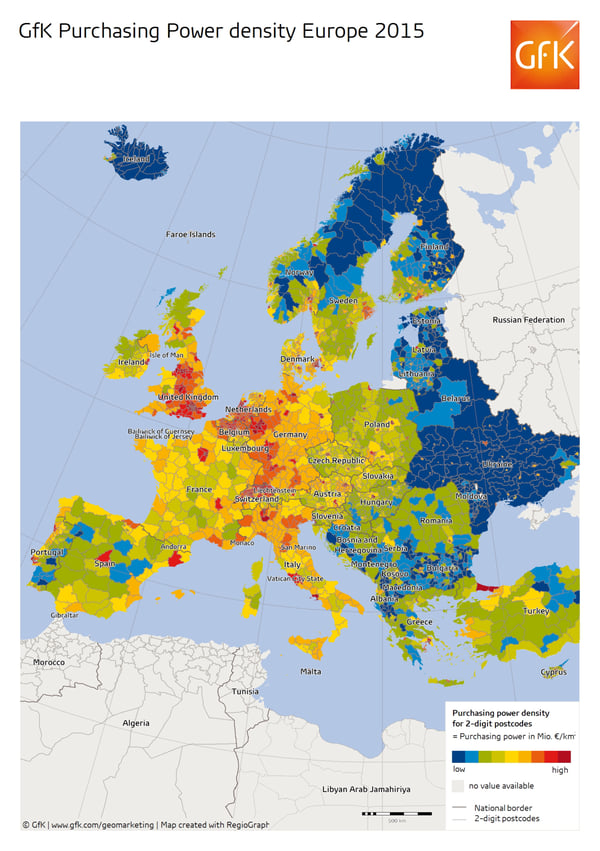 The retailer can also use the purchasing power data to more objectively measure the performance of its stores in each of its active countries and regions. Previously, the retailer had no way of gauging what a good result was for the markets where its stores are located. For example, the retailer knew its best-performing store in France was in Paris and its worst performing in Pas-de-Calais. But this knowledge was meaningless without insight into how these performances relate to the market potential in those areas. Using the purchasing power data, the retailer discovered that Paris has an average per-capita purchasing power of €29,433 (more than twice the European average), while Pas-de-Calais has just €15,688. Thanks to these precise, regionally sensitive numbers, the retailer can more accurately gauge both individual store performance and how those performances compare as a percentage of the total local market.

Three ways to navigate uncertainty in 2023