What's moving and shaking the Russian market for engine oils?

The Russian market for engine oils is undergoing a shift: After a good 2013, the market began to stagnate in 2014 and experienced a slow start in 2015. Market players are looking to adapt and transform their strategies. Their focus is shifting from segment expansion (the good old days) to price competition and efforts to minimize the loss of market share. Trends indicate that some smaller players in the automotive industry will be forced to leave the Russian market.

I expect to see a one-digit decrease in sales for engine oils in 2015 because of the expected decline in sales for new cars and overall crisis-related expectations of consumers.

This comes from GfK’s point of sales data that covers retail channels in major cities in Russia (with a population of more than 500,000) in seven federal regions.

Let's look at what's going on with engine oils.

Traditionally, Russian consumers prefer premium fully synthetic products for their cars. Thus, the share of the fully synthetic segment in Russia reached a milestone of 40% in 2014, which is one of the highest figures across the globe. Furthermore, despite the market stagnation, sales volumes (in liters) of fully synthetic oil grew in 2014 by 4.9 percent, with the largest increase in sales for 5W-30 viscosity, due to the oils needed for cars from leading manufacturers. 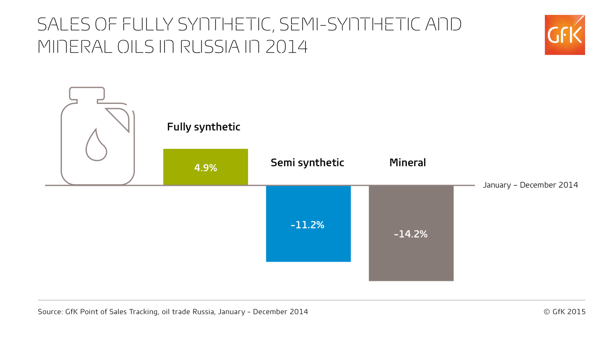 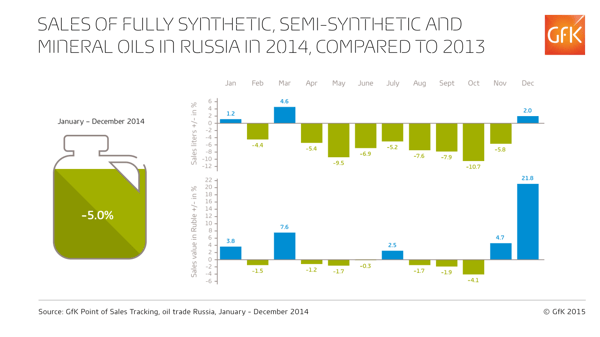 Behind the rise in fully synthetic oil sales is a shift in car preferences in Russia. Newer vehicles require higher quality oil, and new car sales were on the rise in Russia in previous years. Overall, the average age of vehicles has decreased to less than 12 years.

However, the end of 2014 and the starting months of 2015 saw declining passenger vehicle sales, which will definitely be reflected in the oils market. And price deviations, caused by the currency exchange fluctuations, will lead to a redistribution of market share between local and foreign manufacturers of engine oils.

Given these trends, we believe the focal point for foreign brands throughout 2015 will be on pricing strategies and price competition within the foreign manufacturers segment, while local oil manufacturers have chances to benefit from local production.

Other lubricants besides synthetic oils experienced a decline in sales by an average of 4% to 5%, while prices were higher due to the currency shifts. This means the markets appear stable but are actually losing value: Transmission oil sales were down 11.7%; antifreeze was down 5.5%, brake fluid sales decreased by 15.8%, flushing oils declined by 15.4%, while the sale of greases grew by 2.4%, in euro terms.

Transmission and engine oil sales have similar sales trends. Transmission fluids and lubricants are about 10% of the total engine oil market in our traditional retail panels.

Separately, the demand centers for lubricants and engine oils are changing. Sales of transmission oils, brake fluids and greases may fall faster at traditional retail sales outlets, due to the growing share of segments such as car repair garages, which we do not monitor. On the other hand, in car repair garages, the products may be pricier than at retail outlets. This means that some consumers may buy the products they need at a retail store and bring it with them to a garage for use. Considering these trends, I expect the market to experience a one-digit decrease for lubricants in 2015, with growth returning as of 2016.

That said, across all product groups we expect to see further price sensitivity. This is a common cross-industry trend - a shift from the most expensive to medium or lower-cost products within the same segment. As is often the case, the sales of luxury brands/premium products will not be impacted greatly. In fact, they may even grow while sales of non-luxury brands in premium segments decline.

Another trend to watch is retail concentration, as seen in the decline in the number of points of sales in Russia. This means that sales are moving from the traditional, smaller channels to larger ones. This reflects the concentration of demand in urban areas, in line with other countries.

In Russia, an increasingly larger volume of engine oil is sold through superstores. Hypermarkets and Cash & Carry stores experienced a rise in unit sales in the last quarter of 2014 of 19%. This channel showed double-digit growth because of the rising number of new outlets opened in 2013 and 2014, which speaks for the trend of retail concentration. Reasons for growth in this channel are convenience for customers and the ongoing trend of situational purchase, which is reflected in oils purchases. The increasing number of points of sale, and the loss of sales volumes at smaller shops that is replaced by those at larger chain stores and regional superstores, also have an impact. What may be helping most at superstores, though, is the lower prices, which drive consumer purchases in uncertain economic times.

Looking back at how the market evolved in the years including and after the global economic crisis of 2008-2009, I expect market recovery in 2016 with a return of consumer preferences for technologically advanced products.

Ivan Tyndyk is Marketing Consultant of Automotive at GfK in Russia. To gain full insights and benefits from our detailed study of the Russian oil market, please contact ushere.