Tracking the purchase journey for smartphones and tablets in the UK, Romania, Belgium and Russia

How do shoppers in different markets research a major purchase like a smartphone or tablet? How does their behaviour differ by country? That was the question we set out to answer in this cross-country study where investigating smartphone and tablet purchase journeys in the UK, Belgium, Russia and Romania.

It will come as no surprise that most shoppers who bought a smartphone carried out research online, but the numbers doing it might: 95% in Russia, 92% in Belgium, 86% in the UK and 77% in Romania. Online research though does not necessarily translate into online sales. The most typical behaviour is to research online and buy offline (the so called ROPO effect), and we expect to see this continue. Why? Because shoppers view smartphone and tablets as very personal items & therefore need to experience the physical product in their hands. In addition, the desire to check information gathered online, concerns over online payment and avoiding the cost of delivery all make buying in person the preferred option.

Time to research
How long do people spend online researching? The average time across the four markets is 52 minutes, indicating that research is taken quite seriously, but there are wide county differences. At 70 minutes British consumers spend the most amount of time researching, followed by Romanians at 63 minutes, and Belgians at 52. Russians spend the least time – only 24 minutes researching an item that is likely to cost in many cases over $600. And the research doesn’t happen in one session, its spread across a number of days. The entire purchase journey in our study ranges over 15 days in Romania, 17 in Russia and 21 in Belgium. In the UK it’s almost twice as much as the other markets at 41 days.

Time on sites
When we look at how many sites people visit we continue to see different purchase journeys being prevalent in different countries. In Belgium it’s 2.5 minutes per site with an average of 21 sites – the largest number in the research. Just under one third (32%) bought online. In the UK, the average is 7.7 minutes per site across nine sites. 42.5% bought online. The highest proportion of people buying online in this study is in Romania, where 55% buy online, having visited eight sites for an average of 7.8 minutes each. Russia has the lowest proportion buying online, at only 19%. Russians visited seven sites for an average of 3.4 minutes each. Overall UK and Romanian shoppers are broadly similar spending more time on fewer sites. In contrast Belgians are considered researchers involving far more sites in their search than the other three markets, seeking the best price, whilst the Russians are the least engaged in online research.

Peer opinion has less influence than manufacturer and operator site in the purchase journey
Across all countries manufacturer and operator websites formed a key information source for shoppers, as were price comparison sites. Although brand perception is highly influenced by social media, the role of peer opinion through these sites was shown to be less important in this particular purchase journey – with the exception of iPhone shoppers where word of mouth plays an important role. Ultimately the research showed that social media was used by only 6% of shoppers in Russia, rising to 8% in Romania, 14% in the UK and 22% in Belgium illustrating that although social media is growing in its importance to purchase journeys it is still at relatively low usage levels 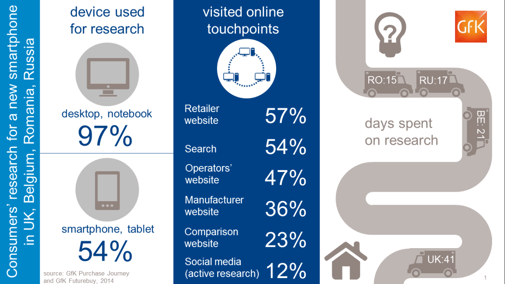 Learnings
In these markets the line between online and offline touchpoints is becoming increasingly blurred – and will become even more complex as the number of touchpoints increases. Consumers switch easily between the virtual and physical world multiple times during their research - taking the best offer regardless of whether it is via an ecommerce website or in a bricks & mortar store. This makes it far more challenging to understand consumer behaviour, particularly to segment consumers into typologies. This means retailers need to follow consumers’ purchase journeys closely, allowing them to model typical routes in order to understand and influence the key moments of decision-making.

If you would like to know more about the results in the participating countries please contact:
Ana Popa - Romania
Bert Hendrickx - Belgium
Will Youngman - UK
Valentina Venkova - Russia

Is the time right for the smartwatch?