A lot of people are increasingly aware of the benefits of social media analysis (SMA).  However, the burning question that most are still not able to prove is ‘what is the ROI of my social media campaign’.  By focusing on SMA alone we are not always able to establish ROI, but by combining it with classical research studies we can accurately quantify return on investment.

Our recent study in Germany captured 100,000 make-up related entries, with more than 15 million people having the opportunity to read these posts – an example of the huge reach achieved for user opinion. One of the interesting findings was that the brand with the most positive comments had the least number of total shares. This suggests a clear opportunity for brands to put more effort into encouraging their consumers to share their positive experiences.

After combining the results with GfK Media Efficiency Panel data we learned that those who had the opportunity to read the posts spent 20% more money on cosmetic products than the consumers being uninfluenced, which when combined with the net spend on the social media campaign, gives us our ROI and uplift figures.

Overall, through this analysis we are able to prove:
• The number of posts is not the most reliable metric to measure social media efficiency as as it doesn’t represent the number of people reached and it doesn’t tell if the brands target group was reached
• Social media is a great reach multiplier: 100,000 post have reached over 15m users (OTS)
• Those who had the opportunity to see the post spent 20% more money on cosmetic products.

In addition, we were also able to show that the majority of contributions are user generated and satisfied consumers are less likely to share their opinions, meaning brands encourage consumers to share their experiences online, and SMA is not only important for high-involvement products, FMCG brands are also discussed online. 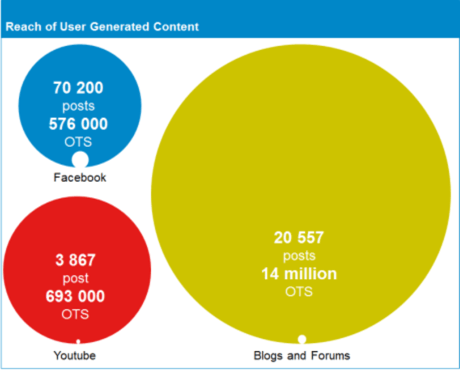 Read more about this topic on Quirk's here or meet us at the German Digital Marketing Expo and Conference on 18-19th September 2013 - http://dmexco.de/

5 tips to optimize your advertising ROI