Does this New Year Boris-bounce point to a turnaround in consumer mood?

“The first month of 2020 has given us a mini Boris-bounce with a two-point increase in our Consumer Confidence headline score. While January marks four years of the Index failing to penetrate positive territory, we now have two consecutive months of improvement. This is good news. The latest measures concerning our personal financial situation for the last and next 12 months are encouragingly healthy and positive, as is the improvement in our view of the wider economic picture for the UK. This is linked to the uptick in the jobs and housing markets, coupled with low headline inflation and interest rates. The Major Purchase Index is the only measure to decline this month, reflecting January’s seasonal post-Christmas empty-wallet feeling, and further impacting the longer-term contraction and sluggishness experienced across the retail sector. However, if current trends continue, we’d expect a return to positive headline scores soon. Are we are finally seeing an end to the UK’s jittery consumer mood?”

Personal Financial Situation
The index measuring changes in personal finances during the last 12 months has increased by four points this month to +1; this is one point higher than January 2019. The forecast for personal finances over the next 12 months has also increased and stands three points higher at +6 this month; this is five points higher than January 2019.

General Economic Situation
The measure for the general economic situation of the country during the last 12 months has increased three points this month to -28; this is seven points higher than in January 2019.  Expectations for the general economic situation over the next 12 months have also increased three points to -24; this is 15 points higher than January 2019.

Savings Index
The Savings Index has, however, increased two points this month to +20; this is six points higher than at this time last year. 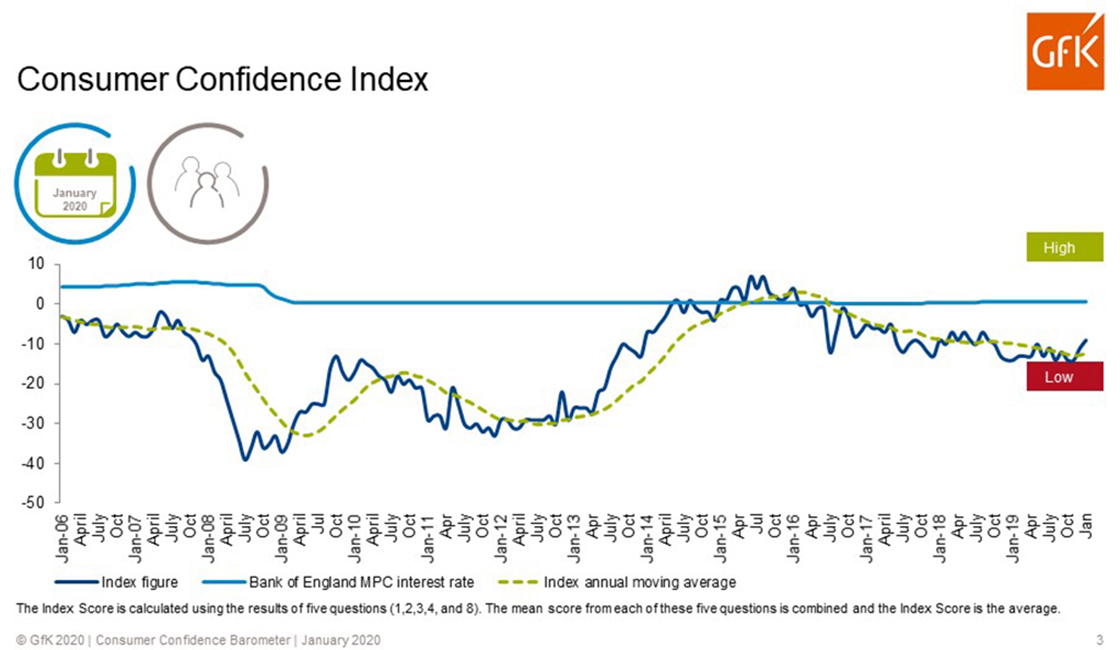 Interviewing was carried out during 2nd – 14th January 2020

This survey was conducted via a nationally representative online survey, with a yearly telephone survey conducted to calibrate the data