Through the lens: 2016 Optics market updates

The United Kingdoms’ EU referendum, the subsequent resignation of the Prime Minister, and the political turmoil stemming from both have resulted in a sharp decline in consumer confidence and economic sentiment, as measured by the GfK Consumer Confidence Index.

A Brexit-Edition of the survey was conducted as a one-off special from 30 June to 5 July in order to capture the mood of consumers immediately after the referendum decision on 24 June. The results show a significant decline in confidence with the overall index score dropping by 8 points from the regular survey of June 16 to a level of -9. Interestingly, respondents’ confidence in their personal economic situations seem to have been less affected, with results down 6 points since June 16 to a level of +2. Meanwhile, confidence in the wider general economic situation has been impacted more significantly, with the index score here down by a massive 15 points to a level of -29. 60% of respondents now report that they expect the general economic situation to worsen over the next 12 months.

The optics product groups have previously proved resilient to economic uncertainty as witnessed by their robust performance over the 2008/09 UK recession. Whether consumer confidence will return over the coming months, and/or to what extent optical product groups will be impacted over a period of likely low economic confidence, will be monitored by GfK on-going. Here we concentrate on performance in Q2 2016,right up to the moment this upheaval occurred.

Longer term trends we have seen within the contact lens market including the increasing share of the market held by daily lenses, the growth of silicone hydrogel share and the increasing sales of lenses positioned at the premium end of the market have all continued through Q2 2016. With the aforementioned economic uncertainty it remains to be seen whether these trends will begin to slow, or even reverse, over the coming months. There are many options for contact lens wearers who may be looking to economise; for example,  we know that most contact lens wearers also wear spectacles at least some of the time, and the most drastic action for these individuals would be to drop out of the category altogether and revert to wearing spectacles full-time. Alternatively, contact lens patients may reduce their wear and use their spectacles more often in order to lower their outlay on contact lenses. Patients adopting this approach may be more likely to wear dailies, which offer a greater ability to save lenses if not worn on particular day than reusables which have a given life span irrelevant of whether they are not worn on some particular days. Other options would of course be to switch to a lower cost lens while maintaining the frequency of wear which could benefit traditional hydrogels, reusables and private label options. Finally, patients – particularly those regularly wearing reusables – may become less compliant with the recommended replacement frequency of their lenses, being tempted to extend the use of their lenses beyond their replacement schedules in order to increase the amount of wear they get out of them.

GfK market sales tracking will be monitoring the contact lens market closely over the coming months to understand to what extent any of the above scenarios may come to pass. 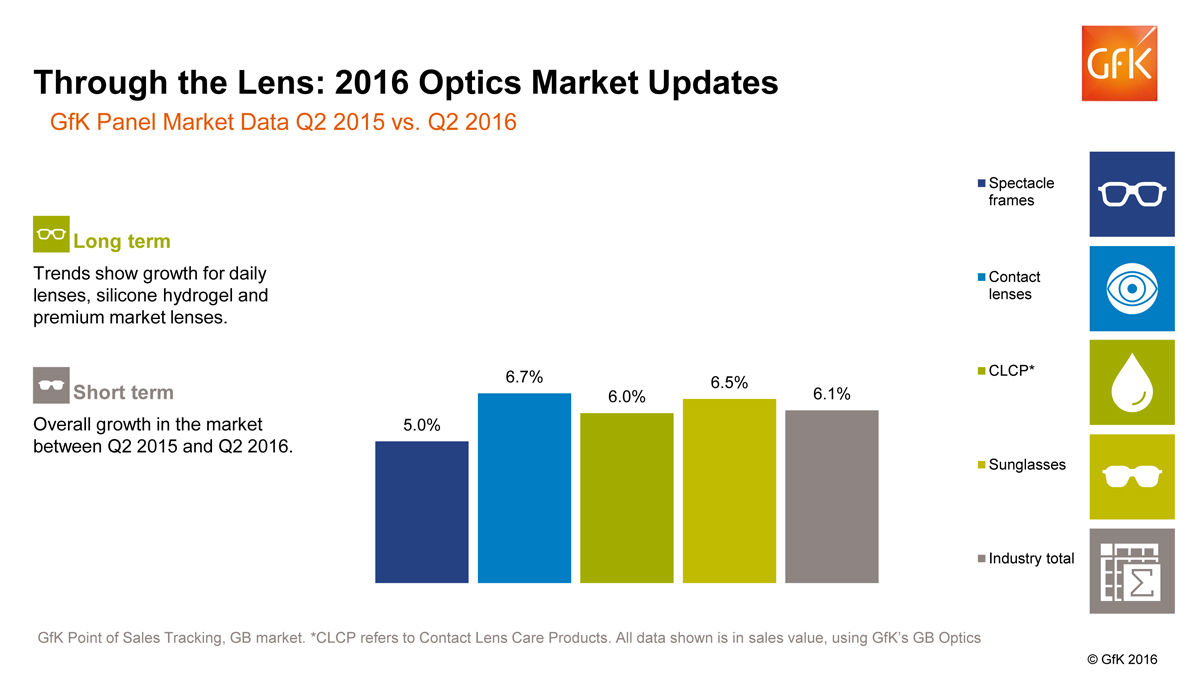