Americans, Canadians and British happiest with amount of leisure time

The busy pace of life is a popular complaint for many people. But findings released by GfK show that the majority of people internationally – 58 percent – say they are completely or fairly satisfied with the amount of leisure time that they have.

These findings are valuable for all businesses offering products or services that focus on people’s leisure and relaxation time, by helping to identify how messaging can be refined to resonate most strongly with each group. For example, people who are least satisfied with their amount of leisure time are likely to respond to offers focused around making the most of limited free time, or activities that can be tailored to fit around irregular periods of leisure.

Americans lead on happiness with amount of leisure time

The concept of ‘leisure time’ undoubtedly varies from culture to culture and even from person to person. Nevertheless, people’s satisfaction with their amount of leisure time – however they perceive that - delivers comparable insights across nations.

Despite having famously few personal days of holiday per year, people in the USA are most likely to be content with their amount of leisure time. Almost seven out of ten (69 percent) say they are completely or fairly satisfied. These are very closely followed by people in the UK and Canada (67 percent each), Belgium and Germany (66 percent each). The countries where people are least likely to be happy with their leisure time are led by Russia, where nearly a third (31 percent) are not at all satisfied, or not too satisfied – closely followed by Japan (30 percent) and Brazil (28 percent).

Unsurprisingly, those aged 60 and over are the most likely to be satisfied with their amount of leisure time, with almost a third (31 percent) completely satisfied and a little under a half (46 percent) fairly satisfied. But the other age groups are not far behind for those saying they are fairly satisfied with their leisure time, with levels ranging from 40 to 43 percent. It is only when it comes to being completely satisfied that these age groups fall further behind, compared to those aged 60 and over. 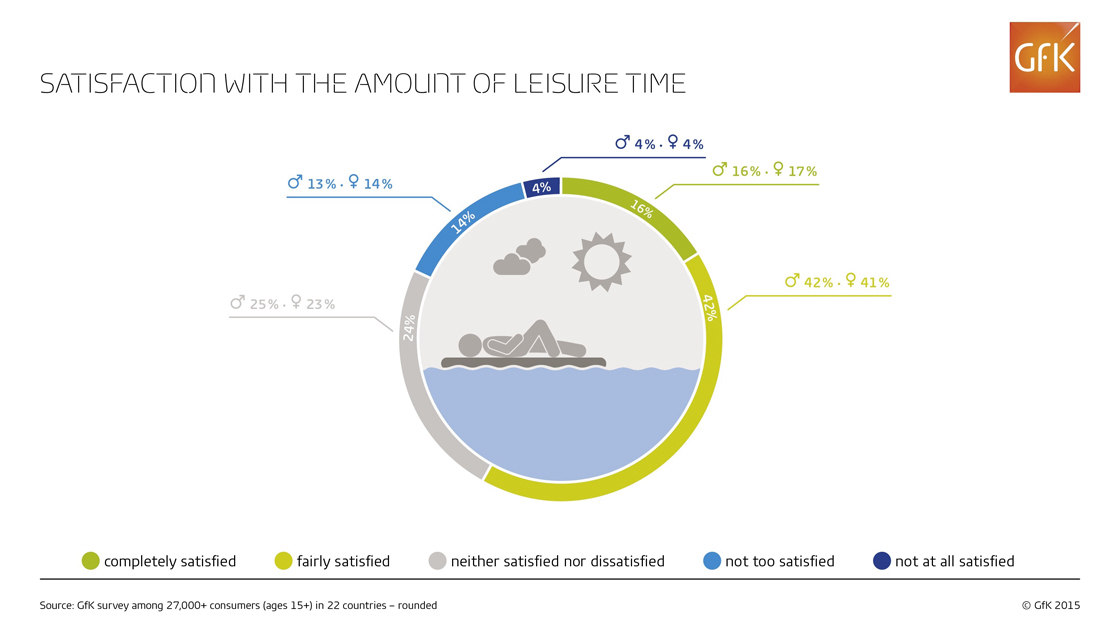 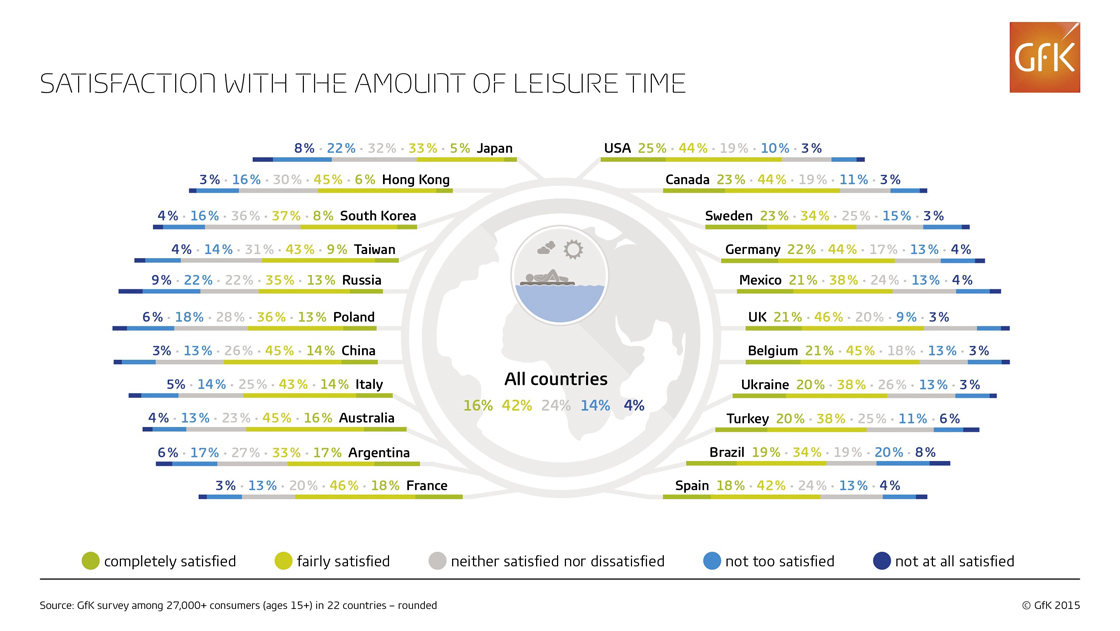 GfK conducted online interviews (F2F in Ukraine) with over 27,000 people aged 15 or older in 22 countries in the summer 2014. In the countries surveyed online, the data have been weighted to reflect the demographic composition of the online population age 15+ in each market. In the Ukraine, the study is representative of the top-tier urban population aged 15+ excluding the lowest SES levels. The countries included in this press release are Argentina, Australia, Belgium, Brazil, Canada, China, France, Germany, Hong Kong, Italy, Japan, Mexico, Poland, Russia, South Korea, Spain, Sweden, Taiwan, Turkey, UK, Ukraine and USA.