With every passing year, smart car technology becomes more of a deal-breaker with consumers. From safety features to voice technology, the options get more compelling – and non-vehicle digital tech keeps elevating car buyers’ expectations. If they can have it at their desks or on their couches, why should they expect less for their vehicles?

In GfK’s latest Auto Tech Insights research for the US market, 8 in 10 US auto intenders – those who plan to buy or lease a new vehicle – say they would “probably” or “definitely” consider abandoning a favorite vehicle or automaker to get the latest smart car technology. The figures are startling, but we should not be surprised. Brand loyalty has its limits, and a lot depends on what is at stake – dollar savings, or self-image, or even pure whim and indulgence.

Smart technology has altered the consumer landscape. Ten years ago, who knew that everyday shoppers would soon pay $1,000 for a new phone, or hundreds of dollars a month just for TV and internet service? Always-on access and the devices that go with it have come to define us as consumers – even more, some would say, than the cars we drive or the clothes we wear.

This is true not just in the US, but around the world, where we see that technology performance is a driver of the rich experiences consumers crave. Global Point of Sale (POS) data from GfK shows that smartphones with large (6” to 7”) displays captured 73% of all category sales in the first three quarters of 2019, while PCs with full HD accounted for 79% of sales in that vertical. And GfK Consumer Life research shows that almost half of global consumers say they are prepared to pay more for products that make life easier. It is not surprising that GfK would want to extend these “premium” tech perks to their cars.

In the US, though, one of the most striking findings about auto intenders and tech obsession is the remarkable chasm we see between the youngest and oldest car buyers. Willingness to abandon established brands in favor of smart car technology is strongest among young intenders; close to 4 in 10 from Gen Y (ages 23 to 41) say they would definitely consider a brand switch. Close to half (47%) among Gen Z (ages 18 to 22) would change their minds based on tech features.

On the other side of the age spectrum, though, just 15% of US Baby Boomers (ages 54 and above) would consider defecting from a beloved brand to get connected technology or digital safety features in their cars. Younger auto intenders are also much more likely to say that they have already made a car purchase that was influenced by smart tech availability. Overall, four in ten (44%) intenders reported this effect – but gaps of 20 to 25 percentage points separated Gens Y and Z from the Boomers and Gen X. For example, 59% of Gen Y said they had already been influenced, compared to just 33% of Boomers. 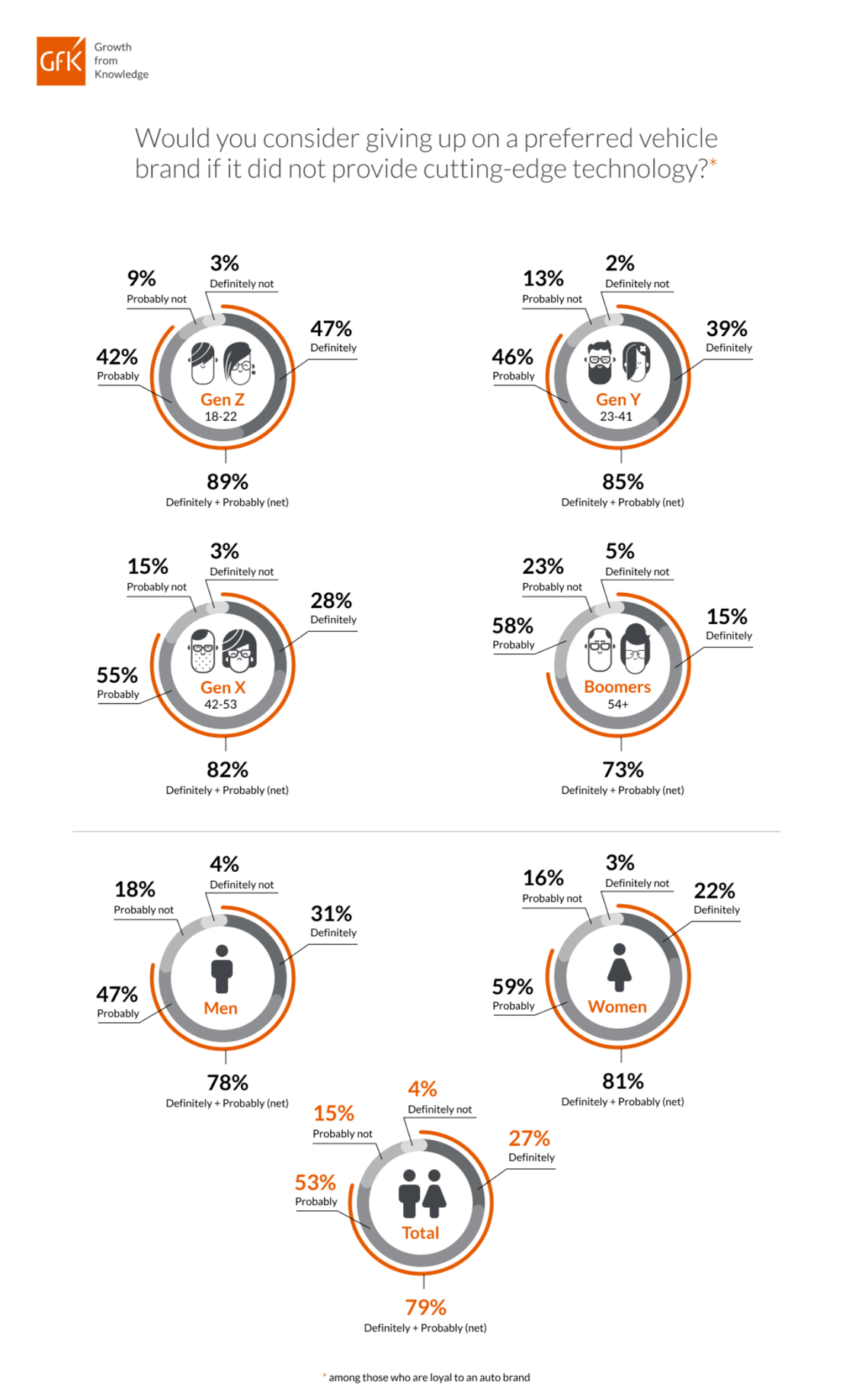 Among those who had defected to get smart devices and services, the technologies responsible were slightly different across the generations. Baby Boomers and Gen X were more likely to switch brands for the sake of Infotainment Systems, and Gen Y was slightly less inclined to seek out Active Safety Technology – although safety features were still the biggest draw across the full population. The desire for Connected Vehicle tech was essentially even across the age groups.

Gen Z would “love” to be driven

Autonomous driving and electric vehicles are slowly winning acceptance, with one in six intenders seeing them as essential today. But younger intenders are more likely to say they are “curious” about electric or hybrid vehicles, and the generational differences get even wider when it comes to reporting they would “love it if vehicles could just drive themselves” – with 52% of Gen Z agreeing fully or somewhat, versus just 19% of Boomers.

The implications of this remarkable age divide are nothing less than transformational for automakers. As much as they may know that digital technology is the game that matters most, it seems as if they simply cannot put too much emphasis on these emerging essentials, especially safety, connected, and infotainment capabilities. The next generations of car buyers will shift the argument even more in this direction, and automakers need to stay relevant at all costs. There are no laurels to rest on – just digital mountains to climb.


Want to know more about the auto industry?

How to optimize your promotions strategy for 2022’s peak period