It is a common assumption among consumers that the retail price of flagship tech devices and features will gradually drop over time. Moreover, it is often assumed that the release of new models accelerates the price decline for the, now obsolete, previous models.

That means consumers often think it is better to wait a couple of months before buying the latest tech device. But how much is price affected? We looked at a huge range of online pricing over time, to answer this question.

How far do the prices of tech devices and features really fall, over time?

The worldwide TV market recently saw the introduction of exciting new display technologies, such as OLED and QLED. Looking at the average price of three 55 inch OLED/QLED TVs (Samsung, LG, Panasonic), we see that the average online price has fallen by 34% between October 2017 and July 2018.

Other consumer electronics categories show similar trends, but to lesser extents. For example, the online retail price of a laptop featuring a Core i7 processor has fallen 8%, on average, since the beginning of the year. Similarly, the average price of a smart watch has fallen 6% year-on-year (YoY) to August 2018.

Overall, there is a considerable degree of variation between different products, reflecting their peculiar product characteristics and strategies, but data suggests a general downward trend over time for ageing technology features. 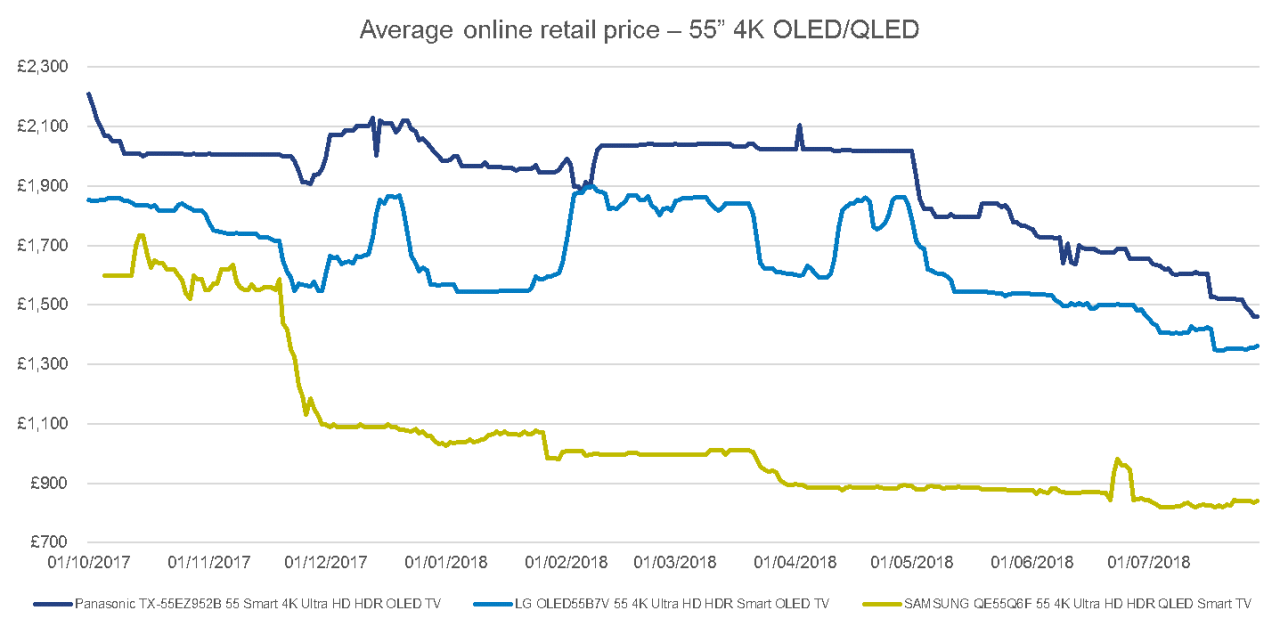 Sim-free smartphones offer a great case study in this area. So, let’s look at the impact that the release of two flagship devices (Galaxy S9 and iPhone 8) had on the average online prices of previous models (Galaxy S8 and iPhone 7).

It is worth noting that the average online retail price of the Galaxy S8 and iPhone 7 does follows a long-term decline trend (the iPhone7 lost 7% and the Galaxy S8 lost 15% YoY, compared to July 2018 prices), but it seems clear that the release of new models certainly had an influence on price movements.

However, this is only half of the story...

The price variations we tracked during the considered period highlight a key contrast between the approaches of the two brands.

Samsung’s device is subject to higher seasonal fluctuations, while Apple focuses on limited price variations in key periods (e.g. Black Friday). This shows that, although there is a long-term price trend in place, brand strategies and retail promotions can have a big influence on average prices and drive considerable discounts.

This dynamic is even more apparent if we overlay the average online retail price and the lowest online retail price. We can see from the chart below how promotional prices can cut deep under average prices and anticipate the price decline trend by many months. For example, Galaxy S8’ lowest price touched £550 in November 2017, 6 months before the average price reached the same level.

The assumption is true, that there is a general trend of price decline over time key tech devices, which is influenced by the faster release of new and upgraded models. However, long-term price movements are also heavily influenced by brand strategies and retail promotions, which can drive deeper price cuts across a shorter amount of time.

This has important implications for both consumers and marketers:

For a consumer wanting to buy the latest technology or a newer model, looking out for key promotional periods is a better strategy than waiting for the price to drop over time.

For Retailers and manufacturers bringing new technology and new ranges to market, the key lies in understanding consumers’ expectation that prices of older models will fall, and their consequent spending behaviour, based on that belief.