UK radio reached a significant milestone on 17 May 2018 when the RAJAR Q1 2018 listening figures were published. For the first time, over half (51%) of all weekly radio listening was via a digital platform, such as DAB (Digital Audio Broadcasting), online or through digital TV. In other words, more radio listening is now done through digital means than through analogue on FM.

Why is this figure important?

In 2009, the UK Government published its criteria for turning off the analogue FM signal and having only digital broadcast. Those were:

The Government’s intention was for these criteria to be met by the end of 2013, pushed by an industry ‘drive to digital’. Without this ‘drive to digital’, they expected digital radio listening to reach 50% organically by 2015.

In fact, it has taken until 2018. The DAB standard for broadcasting digital audio services has been around in the UK since 1995, so one could say the 50% listening threshold has taken the UK almost 25 years to reach. Ultimately, the timetable was dictated by the listener. 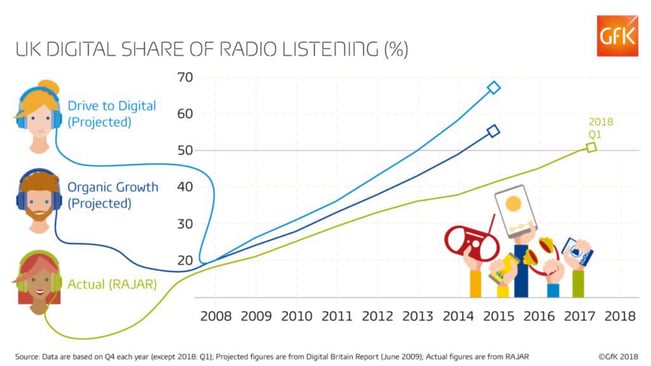 Although the UK has now (just) crept past this specific Government criterion, the UK has, in fact, already embraced digital radio.

In an average week, well over half of the UK population (63%) do listen to some radio via digital means (known as ‘weekly reach’) – and our GfK data show that DAB radio set sales have declined by 26% in the last five years because most people have already replaced some or all of their analogue sets; or are listening through other digital means such as the Radioplayer app or ‘Alexa’.

Theoretically, the Government should now trigger the two-year migration process for turning off the FM signal by 2020. This feels unlikely. Both the public service (BBC) and commercial radio broadcasters prefer nothing to happen for the time being and to continue broadcasting on FM, as well as digital. This aversion to disrupting the market is felt especially in commercial radio, as they enjoy a relative buoyant period for advertising expenditure.

The UK, and many other countries, will also be keenly observing listening trends in Norway, which underwent a digital radio switchover in 2017. Radio listening figures published so far in 2018 show an initial dip in overall listening followed by signs of a recovery. It has also benefitted the smaller and new stations to digital, who have captured around a third of all listening, and brought more choice to the Norwegian listener.

Our forecast for the UK market: from collecting data to connecting data

We believe that we’ll see plans put in place to gradually phase out analogue FM radio broadcasting; this is something the Swiss radio industry wants to happen in their market from 2020. This slow migration would suit a number of local stations whose share of digital radio listening is below 50% and who therefore, understandably, are not keen on losing the majority of their listening.

This landmark digitization of radio may also provoke some movement in how radio audiences are measured. With more listening happening digitally, so the volume and granularity of listening data that can be captured increases.

The emphasis will shift from collecting data to connecting data, such as online streaming or consumer behavior. GfK are already harnessing big (and small) datasets in several markets, such as the Measurement Innovation Program in Australia for radio, and integrating TV and online viewing in Sweden. As different markets operate at different speeds in their digitization journeys, so we recognize that media measurement needs to be tailored accordingly to maximize the value of the audience data to the stakeholders.

Whether the FM signal gets turned off or not in the short term, this is a moment for celebration for the UK radio industry and for Digital Britain, and opens up exciting new opportunities for radio stations, for radio audience measurement and, most importantly, for the radio listener.