Netflix now offers downloadable content to watch offline. So what?

Netflix was the last to join the likes of Amazon Prime and catch-up services in offering its subscribers the flexibility to watch content offline. For a while, Netflix officials have been shutting down all downloading queries cold.

Their decision to “focus on the 95% use case where customers watch movies when they have network access and not to focus on the 5% case of airplane use or watching movies in the backseat of your car,” quoting Gibson Biddle at the 2012 Stack Exchange, was followed through for many years.

Then, as the company focused on growth outside the US, the offline mode was kind of a deal breaker to push subscription rates in emerging markets. In those countries, consumers had already adapted their behaviour to lower levels of broadband speeds and Wi-Fi access and a Netflix offering would have seemed incomplete or impractical without the option to download content.

So, as of the 30th November 2016, we got what we wished for; Netflix introduced downloading options for users worldwide, benefiting even us in the very much developed world in the UK.

But have Netflix subscribers responded enthusiastically to the long-awaited downloading feature?

Here are the facts:

In essence, the download feature is rarely utilized by Netflix users, with the majority of content still being streamed directly. When watching a TV Series that has been downloaded, viewing is more likely to be just one episode, compared with if that content was streamed directly. ‘Binge watching’ is also less likely if content has been downloaded rather than streamed.

‘Binge-watching’- the high level control over what, when and for how long you watch a show (you just don’t dare the thought of stop watching) is a concept that seems to be losing its coolness if all is downloaded for convenience.

When respondents were asked about the reasons they haven’t used this feature yet, the half-hearted ‘I view/stream all I want at home’ response ranked first (with 52% of Netflix subs agreeing). Technical barriers like ‘lack of storage space’ (27%) and ‘don’t know how’ (17%) were mentioned next, and finally 7% could not find content they wanted to download.

For some, the downloading experience was restrictive, if not unpleasant: the unsuitability for desktop streamers, also for Android devices that don’t support HD officially, further technical barriers for Chromecast or AirPlay users, also limitations around the number of devices that can download at the same time, etc. (the list goes on) – all these combined with an incomplete downloading library and the enthusiasm fades away quickly. 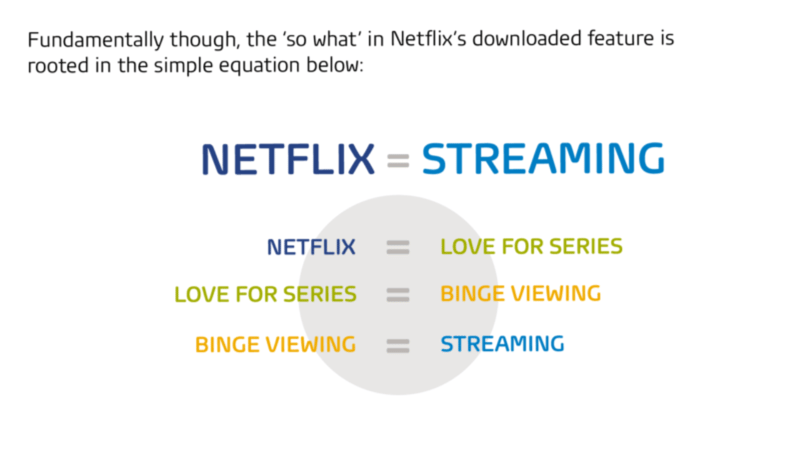 This is consistent with how users are using Amazon’s downloading option too, averaging at an unchanged 5% since launch. In essence, a download sweeps away the beauty of the ‘caught in the moment’, unplanned viewing experience and is reduced to a practicality function.

So, thank you Netflix for the ‘nice to have’ perk; it’s got to be there even if hardly ever used; for peace of mind, planes and dodgy Wi-Fi service at hotels.

Whilst acknowledging the ever changing video landscape, I would be really surprised if Netflix’s downloading usage presents an uptake over the next few quarter results of our SVOD study. It’s only when post-Generation Z consumers start their own revolution on the way content gets consumed that we will be in for a surprise!

Mary Kyriakidi is the Director of Media & Entertainment at GfK. To share your thoughts, please email her at mary.kyriakidi@gfk.com or leave a comment below.