EN
back
1
min read
share this page
Media and entertainment

Over half of the international online population (59%) reads from a book “at least once a week”, according to our recently released report featuring survey results from 17 countries.  Just under a third (30%) of those surveyed read daily, with China leading the way for the percentage of its population who are regular readers.

Russia (59%) and Spain (57%) rank behind China (70%) for the percentage of their online population that reads “at least once a week”.  When we combine results for everyday readers, and those who read “every day or most days”, China leads again at 36% with Spain and the UK following closely behind at 32% each. 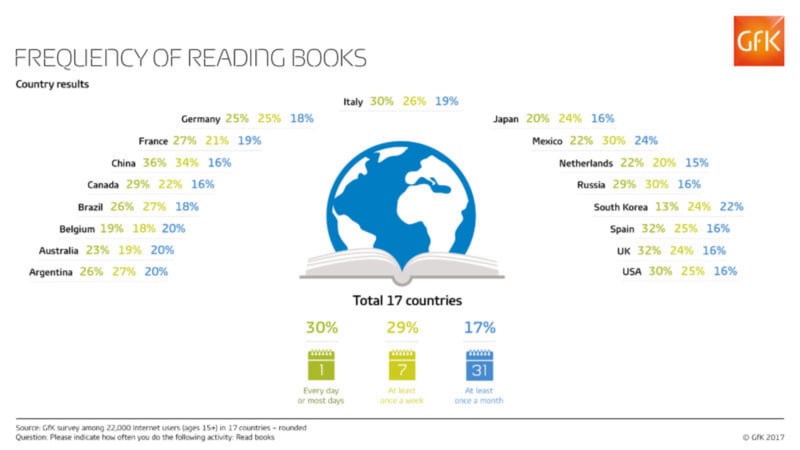 “The value of these findings for the book industry lies in combining this self-reported data with analysis of actual sales across different markets and insights from our retail and consumer panels”, says Mathias Giloth, Managing Director of GfK Entertainment. “With this multi-layered approach, we help our clients to fine-tune their audience segmentation and identify customer potential, both globally and at country-specific level.”

Women are more likely to be avid book readers than men, with 32% reading daily, compared to 27% of men from the international online population.  The gender gap between regular book readers is widest in the Netherlands and Spain, followed by Canada and Germany.

The Netherlands, along with South Korea, both registered as countries with the highest percentage of their online population who report never reading books, at 16% each.  Belgium (14%) and Canada, France and Japan (11%) have the next highest proportion of non-readers.

5 tips to optimize your advertising ROI

Hybrid Future: How Tech & Durables brands can capitalize on the new work from home reality