‘The Grand Tour’ drives into pole position for Amazon

The Grand Tour – Amazon’s biggest visual production to date - was released on 18 November 2016. Essentially, for all those who aren’t aware of what The Grand Tour is, the show is an updated version of BBC’s Top Gear, hosted by the three presenters who really (whether you like them or not) made the show what it is today: Jeremy Clarkson, Richard Hammond and James May.

Talk about the release and production of this new Amazon Original series has been circulating over the last 18 months, with Jeremy Clarkson even popping up in  Amazon’s advertising to help promote products like the Amazon Fire stick, but also to help keep awareness of the new show alive.

Once the show was released, there were mixed reviews from all corners of the media, with some claiming that the show had exceeded expectations, whilst others felt it was offensive and off-key. Away from the newspaper columns and online comment sections though, our UK SVOD data allows us to understand a bit more about how the show actually performed against other titles on Amazon (they keep this data very close to their chest), and what viewers actually thought about the show. 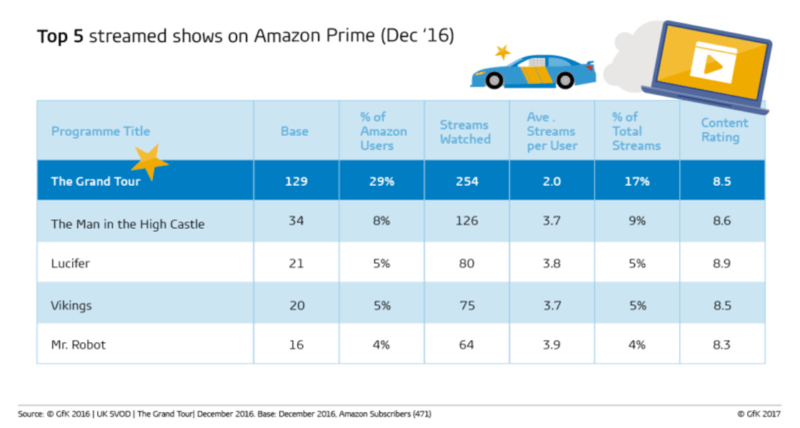 Firstly, even though it was only launched halfway through the month, The Grand Tour (TGT) became the most streamed show on Amazon in November 2016, accounting for 8% of all the streams watched in that month. In the following month, the show was still the most streamed title, and increased its share of streams to 17%, a clear winner and ahead of the second placed title, The Man in the High Castle which attracted 9% of all streams viewed.

However, what is perhaps more interesting is that in December, 45% of all active Amazon users watched at least one episode of the program (we define an ‘active user’ as someone who has watched something in the last week). This is the highest proportion of unique viewers that we’ve ever recorded, not just for Amazon, but also across all platforms captured by our tracker in the UK (which includes Netflix and NowTV). This suggests that two things might be happening: existing subscribers are all intrigued by the show and/or lots of new people have signed up especially to watch the program.

One key reason behind Amazon’s investment, was of course, not just to attract publicity and views, but to encourage sign up amongst a different target audience to those already signed up. 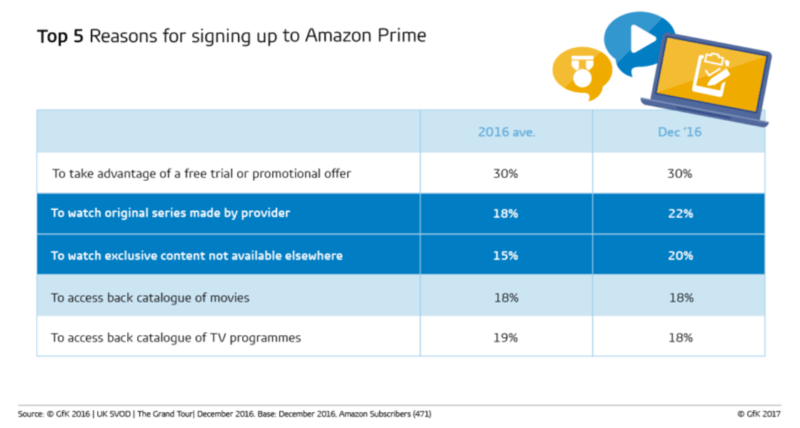 In December 2016, the top reason for sign up to Amazon Prime was ‘to watch original series made by the provider’ (this excludes those signing up for free shipping and because of a free trial).  The next most popular reason for sign up was ‘to watch exclusive content not available elsewhere’. To underpin the appeal of TGT, over half of those who said that they signed up to Amazon in order to watch a particular show said it was TGT that they wanted to watch, definite signs that TGT was doing the job it was commissioned for. This I believe can be fairly linked with the launch and increased marketing of The Grand Tour (awareness for TGT was high, with 84% of all Amazon users in December having heard of the show).

When asked why they started watching this new series, the majority of viewers (68%) said that they are/previously had been fans of the BBC’s version of the show. Furthermore, just over half (52%) also stated that they are fans of the presenting trio (Clarkson, Hammond and May), indicating that many of The Grand Tour’s viewers have migrated from the BBC to Amazon (and more technically, from Linear TV to SVOD).

In terms of the program quality, the main question most people are asking is, “is TGT better than the original?’. Amongst those that watched the show, 55% felt that The Grand Tour was ‘much/slightly better’ than the BBC's Top Gear show with the same presenters, and 45% of viewers also thought that the show exceeded their original expectations. This is backed up with the show’s content rating.

When asked to rate the show using a 10 point scale, TGT scores a content rating of 8.6, higher than most other big Amazon Originals such as The Man in the High Castle (8.3), Transparent (8.2) and Bosch (8.5). The show also scores a lot higher when compared to the average content rating for any show watched on Amazon, which currently stands at 7.9, proving that the high production cost may be paying off (as it happens, the viewers of the show also agree that Amazon’s investment has been worth it, with less than 1/6 of viewers saying that they were disappointed with the show, or that Amazon have wasted their money in making it).

With Amazon finding success from their investment into TGT, it should be expected that they will continue to spend to produce exclusive content not available elsewhere to bolster users of the service.

It is also highly likely that the 2nd season of TGT will be backed by an even bigger marketing budget, given the success the show had in reaching such a wide range of Amazon users, and that all those who watched the show generally thought it was great.