back
3
min read
share this page
Media and entertainment

Media consumption behavior has become increasingly fragmented across channels and devices, moreover marketers need to respect local characteristics of their markets. As stated in our last blog entry in June we investigated the crossmedia landscape of four markets. The result was four markets, four different stories. While in Indonesia mobile has become default, 80% of page impressions in Brazil happen on desktop screens.

To forge effective marketing activities, we need to step back and take a closer look on the core element of communications: the target audience. Industry and research alike spend significant efforts to segment and survey consumers effectively. Psychographics, lifestyles and other attribution factors such as attitudes, purchases or online behavior need to be considered in order to assure that messages reach the right audience. But let’s take one step back for the moment and focus on the core data layer of each target audience: sociodemographics.

Sociodemographics splits have received quite a bit of bad press recently. While much of the critique holds true that marketers need to think further than gender, age and household income, we should not be tempted to disregard those as of less value. Media consumption is still heavily depending on sociodemographic parameters – Let’s take a closer look at age cohorts as an example.

Much has been discussed around the role of digital in the life of Millennials – Those individuals who have spent their childhood or teen years in the nineties. Within this time of their lives they have witnessed the rise of online, e-commerce and mobile and therefore are the age cohort more accustomed to digital media than their parent generation. But how do they compare to those who have been exposed to digital technology from their early childhood on, so those aged 14 to 24 years today? Are they really the proclaimed digital natives?

Social networking has become part of everyday life. But are there any differences on how Gen Z uses social media compared to Millennials? A closer look at the German market reveals similarities at first glimpse – the top three social media services are the very same among both age groups: Facebook, Instagram and Twitter rule the scene.

While Facebook has a slightly higher reach among Millennials, the reach of Instagram and Twitter more than doubles among those aged 14 to 24 today. Around 50% of young individuals among the online population use Instagram and Twitter. But reach is only one indicator for the popularity of certain online services. Even more revealing are the figures for duration, the average time a unique user engages with each service in one month’s time. Compared to the millennial generation, the younger cohort spends almost triple the time on Instagram and Twitter. Together with their time they spend on Facebook, this adds up to over 14 hours of social media consumption per month on average.A further drill down into these figures reveals in addition: while Facebook is used almost evenly among females and males, Twitter has a higher share of male users (69%) compared to females in the Gen Z age cohorts. The same trend is, while less striking, also to be observed among Instagram users – 55% are male.

But how about youths in other markets – maybe the high involvement of Gen Z on social media is purely a phenomenon among mature online markets such as Germany. Let’s put the spotlight on two exemplary markets, Brazil and Turkey. Both markets have a similar degree of online maturity; on the other hand they are culturally worlds apart. When it comes to social media usage among youths however, both markets show a similar pattern to Germany – Facebook, Instagram and Twitter dominate the scene. 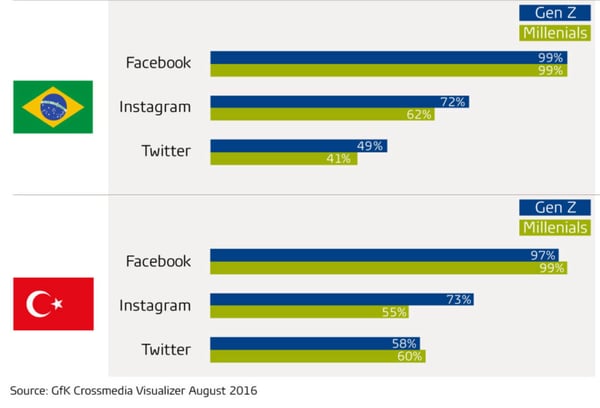 While in Brazil Facebook is nearly ubiquitous, it’s again Instagram and Twitter with the higher reach among the younger cohort compared to Millennials. The photo sharing service app also reaches nearly ¾ of Gen Z in Turkey, while the presence of Facebook and Twitter are similar among ages.

As we have clearly seen from the above example on social media usage, it would be neglectful to disregard sociodemographics, in this case age and gender. Especially among the younger age groups, online behavior tends to vary profoundly from other age cohorts – even compared to the generally digital savvy Millennials. Just look at the massive success of Pokémon Go among youths this summer – 42% of Gen Z was using the game app while only 25% of Millennials were out in the streets catching Pikachu.

Deep drills into sociodemographics are just the starting point of getting familiar with your audiences towards crossmedia and crossdevice usage. The above case study on social media usage among Gen Z vs. Millennials is fully based on data provided by the GfK Crossmedia Visualizer. This cutting edge tool offers up to date, clear and deep insights to all relevant indicators of online usage across and by devices (PC, smartphone, tablet). Moreover the internet usage data is linked to unique users’ consumer profiles, including all relevant sociodemographic data and further profiling attributes such as media usage, TV consumption and lifestyles.