A little perspective: The long term view of consumer confidence

Last week, after the Chelsea bombings, a friend of mine called and asked how everything was in New York – was I able to get around?  Was my daughter’s school closed?  Had I missed work?  Could I still go out and buy groceries?  Very thankfully, the answers to these questions were yes, no, no and yes -- everything was OK.

We then talked about how it seemed the further away from New York City you are, the more dramatic (and traumatic) the events were, but for intrepid New Yorkers, the reactions were much more measured.  In fact, New York magazine published an article “Things New Yorkers Are More Afraid of Than ISIS” (bed bugs and flying cockroaches top the list) and one Twitter user gained Internet fame in a nanosecond with the post, “Yeah, I heard the bomb go off so I called 911 and then went to the deli” (I paraphrase).

This got me thinking about perspective, and how sometimes it is so easy to get caught up in what has happened in the last 24 hour news cycle, seeing everything only through that lens.  Our latest findings from the global GfK Consumer Life study bring this point home.  Our 2016 numbers are recently out, and we have been tracking global consumer confidence for the past two decades.  This year, 68% of consumers around the globe feel confident that they will be better off in the next 12 months, and the number hasn’t really budged (upwards or downwards) in the last three years.  Our high point in this metric was way back in 2000, during the height of the dot.com explosion, when it was 73%.  The low was during the 2009 global financial crisis when the number dipped to 59%. 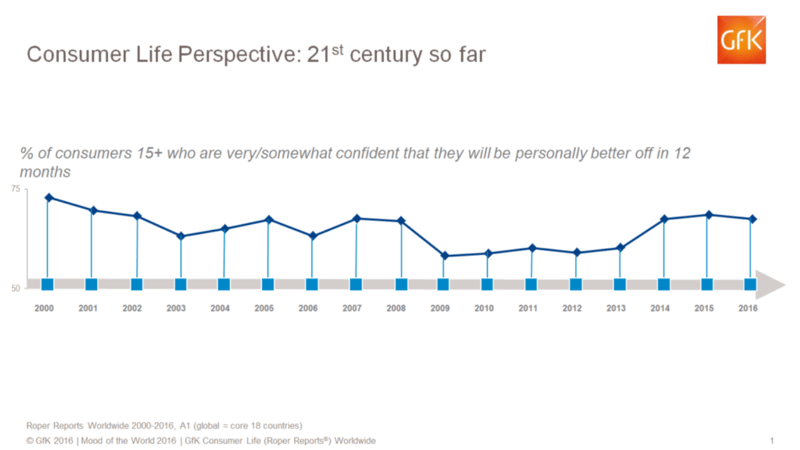 So, what does this mean?  A few things:

Kathy Sheehan is Executive Vice President and General Manager of GfK’s Consumer Trends team. She can be reached at kathy.sheehan@gfk.com.