EN
back
3
min read
share this page
Trends and forecasting

Who will triumph in China’s wearables market?

While the wearables market hasn’t boomed as manufacturers had hoped, this space is far from stagnant. As we explored in Tech Trends 2016, well-known tech and fitness brands have dived into western markets and subsequent worldwide device sales have been healthy – 77 million in 2015 according to our Trends and Forecasting insights. Yet there’s still huge opportunity further afield. Asia made up 37% of sales last year, and one of its largest nations, China, is set to see an increase in sales of these devices of 80% in 2016. In this increasingly competitive marketplace, players that will win consumers over are manufacturers that are culturally sensitive, answer specific needs with rather simple and affordable than complex and luxurious devices – and deliver clear use cases with immediate value.

In China, two key wearable device categories have contributed to the fast-growing wearables market; locators and health and fitness trackers which reached 5.5 million and 9 million device sales respectively in 2015. So why is this?

Apple Watch’s launch in April 2015 undoubtedly had a significant impact on China’s wearables market. Beyond actually selling its premium devices, the brand helped educate consumers to the varied functionalities of smartwatches and locators, the latter being simply 3G-enabled wristbands that submit the geo location of the wearer to another person. Since then, local brands have capitalized on consumers’ desires to experience such wearable devices for a more affordable price, while also targeting to meet some very specific needs.

One example of this is locators which have boomed in China, being purchased in particular by people with children. In an environment where child-trafficking is not uncommon, the issue of child-safety is a primary concern for parents. Brands such as Xiaotiancai and 360 have successfully targeted this niche market with simple locators that meet parents’ needs for being aware of their children’s location no matter where or when.

Meanwhile, other local brands are also benefitting from the marketing activities brought about by bigger global tech players. Local brands selling cheaper devices have proved popular among Chinese consumers. It remains to be seen whether consumers will be convinced to purchase the pricier and more powerful smartwatch models.

In the second half of 2014, Chinese local brand MI launched ultra-low priced HFTs at the 79 RMB mark (around 12 EUR). The device proved a big success; MI capitalized on what has been a rapid pace of expansion in the health and fitness market in China, largely driven by its’ expanding middle class. As more Chinese consumers aspire to achieve ‘the middle class lifestyle’, being health conscious is an increasingly prominent part of that trend. Tracking devices that both allow the user to visibly demonstrate an interest in health and fitness (by being worn on the wrist), while also offering a taster at an affordable price of the benefits of what a more costly and powerful device might achieve, have consequently seen strong sales.

Since then, China’s HFT market has been pushed into a low-profit era. Many local manufacturers have struggled in the ensuing price war, with some trying to make the transition to smartwatches or other related products. Of course, more sophisticated HFTs (with higher price tags) are also present on the market, but there is a question mark over how long this price premium can be maintained as more aggressive manufacturers enter the market. What is clear is that the market potential is substantial – in 2016, the HFT market is forecast to reach 15 million unit sales. 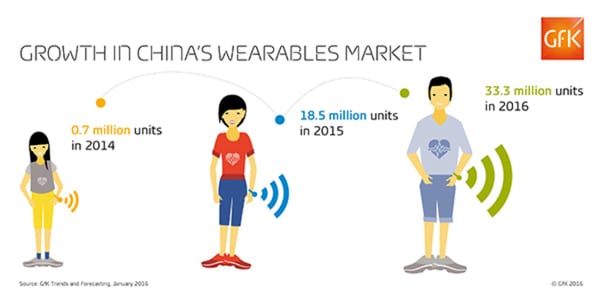 As the Chinese market demonstrates, big opportunities lie in meeting the unique needs of specific markets. Local manufacturers are undoubtedly in a strong place to tap into cultural nuances, something that global players can be blazon about with a ‘one-device-fits-all’ approach. Rather, each function has to be chosen carefully to deliver direct value to its users. Local brands are exceptionally good at responding to this sensitivity. However, as the wearables market develops, both large and small players have an opportunity to maximize on consumers’ increasing familiarity with and understanding of the benefits of wearable devices. Today’s connected consumer is increasingly demanding – they want to see clear use cases that relate to their everyday lives.

Please email me at Julian.Tan@GfK.com to share your thoughts.