Trends & tips for reaching audiences in the multiplatform world in 2016

Recently, a number of clients joined me for a webinar on five notable findings from 2015 taken from the series of reports GfK publishes under the umbrella of The Home Technology Monitor™ (HTM). You can access the webinar and download the infographic for more details, but keep reading for a quick review along with trends and tips for reaching audiences in 2016.

Five notable findings for 2015 with recommendations for 2016

Despite some variance, TV networks taken as a whole tend to have similar brand metrics whether people view a network via streaming or view it only on “regular TV” (live, DVR, or VOD). The only exception in our limited list of networks was a Sports network, where Streamers exhibited a much higher brand resonance than TV-Only viewers. Looking ahead, as more and more consumers turn to content aggregator sites, there is increased risk of disassociation of a program from the originating network. One recommendation we have is that networks and content creators should pursue licensing agreements that require some type of network attribution for programs streamed by aggregators which are still in first-run network status. (Source – How People Use® Media: Brand Effects of Streaming 2015)

Between 2011 and 2015, households that have cancelled cable and/or satellite TV subscription at their current home have become more affluent (median income up by two thirds), more white (up by a sixth), and more likely to have many media devices and services. Cord-cutting homes have transitioned from being characterized as those at the lower end of the socio-economic scale – reacting to the Great Recession and its squeeze on household budgets – to being a lifestyle choice among more mainstream homes that can afford pay TV. We recommend that stakeholders look at the cord-cutting market as bifurcated – those that cut because of economics, and those that cut because of perceived value of pay TV vis-à-vis streaming services. Marketing positioned to each of these different groups will be important to either head off a decision to cut, or bring back a lapsed subscriber. (Source – 2015 Ownership and Trend Report)

Attitudes towards primetime advertising have remained consistent, and have even improved in some aspects, from 2004 to 2015 – consumers have not turned against ad-supported TV over the 11 years of this study. Despite greater use of streaming and VOD, linear/live TV is still the leading video platform for advertising, viewers of all ages still regard ads in linear/live television to be much better than ads in streaming video or pay TV VOD in six ad receptivity statements. With all the changes in TV and video viewing over the past decade, we believe TV networks and their advertisers are fortunate to have maintained their position. Networks and advertisers should continue to take steps to make sure that they do not sour their relationship with the viewer through excessive ad loads, ad frequency, and so forth. (Source – How People Use® Media: Primetime TV 2015)

The fastest-growing alternatives for watching TV programs and movies (Internet-connected streaming media players, smart TVs, and Blu-ray players) use a TV set as the viewing screen. Thus we see that the TV set continues to be at the heart of video entertainment now and into the foreseeable future; it’s the mix of content sources we expect to continue to evolve. One recommendation is that content providers should work with CE manufacturers to get their apps pre-loaded into TV-connected devices, which will enable viewers to easily find their content amongst increasing competition. (Source – How People Use® Media: Over-the-Top TV 2015)

Comparing our 2012 and 2015 waves, we see that consumers are using TV Everywhere (TVE) more often and authenticating, but they are doing so seemingly without good understanding of what TVE offers. How much better could TVE platforms perform if there was more widespread understanding of TVE and what it offers – subscription-based access to TV content through the internet and mobile apps, anytime, anywhere? In a mortal battle against subscription video on demand (SVOD) services, TV networks and service providers don’t want to leave any viewers “on the table” due to a lack of education. TVE platforms – from TV Networks or from TV Service Providers – should reassess, refocus, and redouble their TVE marketing and education efforts. (Source – How People Use® Media: TV Everywhere 2015) 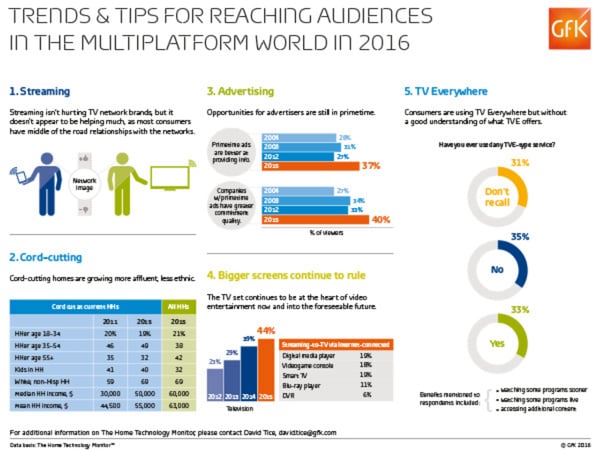 Please email me to share your thoughts at David.Tice@GfK.com.

Find these insights useful? Get similar findings and more details about GfK’s The Home Technology Monitor™ (HTM) as soon as they get published by emailing the Home Technology Monitor team. Our first report, Comparing Streaming Services, is due out in March, with other report topics for 2016 including over-the-top TV, digital media players (Roku, Chromecast, etc.), and a look at why consumer preferences seem to have changed from buying physical media (videotapes, DVDs) to subscribing to digital media (SVOD).