EN
back
2
min read
share this page
Media and entertainment

Tech forward with teens: Stepping outside the new media bubble

Sitting at a recent media conference, I once again heard someone tell how their family – and especially their teen – is the example of how the media market is being disrupted, or even dying. These “my family” anecdotes are so prevalent at media conferences that, for the last couple of years, I’ve kept a running total of them, just for amusement.

But these anecdotes confound me, as they tend to reflect the “bubble” that many media people live in – a state of being unlikely to be to found west of the Delaware River or east of Interstate 5 (on the West Coast). And this presence in the bubble may distort their perception of the overall marketplace.

This year, I decided to put some real data on my intuition. As my source, I used our recently released 2015 Ownership and Trend Report[1], which not only provides subscribers with long-term trends, but also allows users to parse the data to address many business issues. With our fully representative and projectable sample, we can supply highly reliable media profiles of American households.

I looked at “Tech Forward” regions well colonized by the media industry – around New York City, Boston, Austin, Los Angeles, San Francisco, and Seattle – and compared them with the rest of the USA for a short, but useful, list of media devices/services. What we found is that Tech Forward regions are indeed significantly more likely than the rest of the USA to view OTT content on TV sets; to own a tablet; and to have broadband connection to their home.

Slicing the data further to compare Tech Forward region homes that have teenagers widens the gap even more. These “Tech Forward Teen” homes are significantly even more likely than non-Tech Forward homes to view OTT content on TV sets; to subscribe to an SVOD service; to own a tablet; and to have broadband connection. 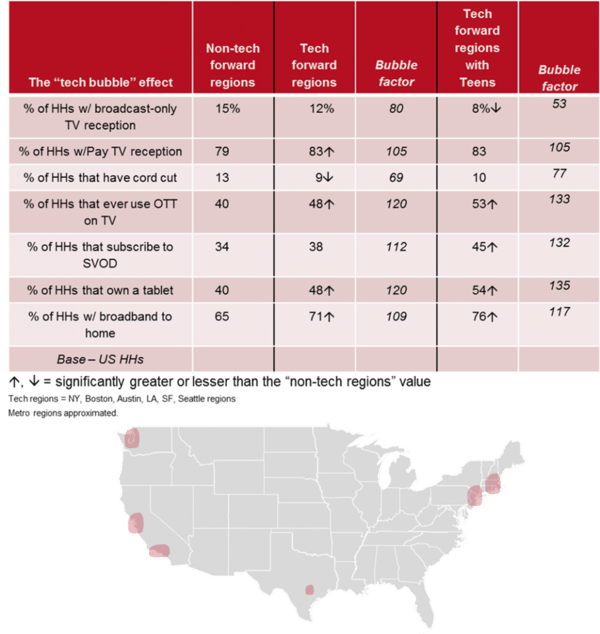 This harkens back to the concept of “regional differences” – the idea that media usage, habits of consumption, and even receptivity to advertising – can vary notably by geographic area. Savvy researchers leverage this concept for their businesses to make sure tactics, strategies, or messaging is tweaked for maximum impact in different areas of the country.

But if you add a teenager to the already lopsided tech profile of households in these tech forward/media regions, the opportunities for misunderstanding become acute. It is easy when one lives in L.A. or New York to forget that “normal behavior” may be very different just a state or two away. Such a bubble can burst business strategies, if they were based on a distorted perception of the total marketplace – and especially if your market target has the teen wildcard in play.

[1] 2015 Ownership and Trend Report, published June 2015 as part of GfK’s The Home Technology Monitor™ service. The study used a sample of 3,100 US households, including representative levels of off-line, cell-phone-only, and Spanish-speaking homes.