EN
back
3
min read
share this page
Media and entertainment

Amazon Prime deal with Clarkson and Crew – a move into the fast lane, or an expensive car crash?

Amazon Prime’s acquisition of the yet to be re-titled “Son of Top Gear” looks set to be one of the defining moments in recent TV history. It may not be the first original series that the video service has commissioned but it is, without doubt, by far the most significant.

Viewers worldwide are expecting that apart from its new title, this show will have as much entertainment value, presenter buffoonery and tentative links with the world of motoring as the original format. Indeed, now released from the shackles of the BBC’s public remit and OFCOM’s broadcasting codes, there is even greater capacity for mayhem as Clarkson, May and Hammond push the boundaries even further.

The signals of success are clear. Traditional linear viewing is in decline, particularly among younger viewers who prefer the more flexible and device neutral advantages of online delivery. According to BARB, traditional TV viewing is down by nearly two hours a week this year among 16-24 year-olds – the very group who are turning to SVoD and other online sources, and the very rationale for BBC3’s proposed reinvention.

Yet, this does not mean that this group are watching less content. Far from it. They’re just enjoying the opportunity to curate their own schedules rather than adhering to the timetable set by traditional broadcasters. GfK’s latest research echoes that of other industry measures and indicates that over half of all 16-34 year-olds now have access to an OTT subscription-based video streaming service. The news that the reinvented show might be available to watch anywhere, anytime is music to their ears. The same can undoubtedly be said for households with children and those in the higher socio-economic grades who also over-index on OTT subscriptions and together, constitute the traditional heartland audience that are the fans of Clarkson and his partners in crime.

Amazon’s deal also indicates that they are well aware of the appeal of different genres on their service and another reason why this may have been a very shrewd business move. Although the majority of consumers sign-up to Amazon’s Prime service for the free shipping on their purchases, many also cite access to the catalogue of movies as a reason for registration. However, when it comes to actual viewing, our research shows that it is TV programs that hold their attention. 55% of all the minutes consumed in Q2, 2015 on the Amazon service were devoted to TV programs, compared to 43% for movies. 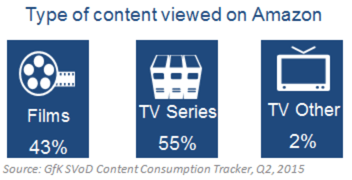 In addition, both original series exclusive to the platform (such as Vikings and Ripper Street) as well as TV series that already have an established linear pedigree, are the content types most likely to drive viewing – two facts that won’t have been missed by Amazon’s content commissioning team.

Will the new show in itself drive sign-up to Amazon Prime? Quite possibly. Original programming is not a principal driver of sign-up, but is one of the factors that persuade consumers to part with £79 per annum for free shipping and access to a large library of content from which to build their own TV schedules.

So, for some consumers, Amazon’s acquisition will be game-changing and a reason to justify membership of the Prime service. For others, it will pass them by, especially if the reincarnation of the BBC2 show, with Chris Evans at the wheel proves itself. Up until now, Amazon has offered access only to a number of Top Gear specials whilst Netflix have carried the bulk of the archive. If the new show has the potential to prove “unmissable” viewing, much as Breaking Bad has done for Netflix, then the power of social media and word of mouth recommendation will certainly increase its collateral as a driver of subscription.

This time next year, we’ll know whether Amazon is overtaking its rivals in the fast lane or if their investment is in need of the rescue services. My bet is that it is more likely to be the former, and if the producers and presenters deliver the goods, Amazon will be celebrating in pole position. Alternatively, I doubt Netflix will do nothing, and they may yet reveal a highly engineered, new rival vehicle. Whatever the outcome, one thing we can all be assured of, is that in true Clarkson style, it’ll be a newsworthy and entertaining ride.