Reading emotional response to advertising: How one automaker used it

You've been test driving cars and researching the vehicle you want to buy. Now it's down to decision time.

How exactly will you choose the brand, the features and the color you want?

Most of us imagine that our choice will be completely rational and based on pragmatic thinking. Of course, we'll naturally choose the right car by considering our personal list of wants and needs and the hard facts we see in front of us.

Though it's easy to believe we are capable of making a rational decision on something like a car, recent brain research and psychological studies show us how misleading that idea is. In fact, there is no decision that is made without emotions.

In the face of information overload (which, by the way, is increasing as technology evolves), human beings rely on emotional thinking. Our brains are wired that way to help us cope with too many choices and too many impulses. [This is something the scientist Antonio Damasio defined within his somatic marker hypothesis.]

The way emotions impact purchase decisions - and the ability to analyze emotions accurately - are key understandings behind a GfK tool that analyzes facial expressions to help automakers measure the effectiveness of their advertising.

Called GfK EMO ScanTM, GfK developed the tool in collaboration with the Fraunhofer Institute for Integrated Circuits(IIS) in Erlangen, Germany, and the Emotion Research Group at the University of Geneva (CISA). The software is based on a Sophisticated High-speed Object Recognition Engine (SHORE) that captures facial expressions. By categorizing these facial expressions using a GfK-specific database, a so-called "valence curve" is calculated. The curve illustrates the intensity of positive or negative emotions. This curve is then linked to the content of an advertisement. 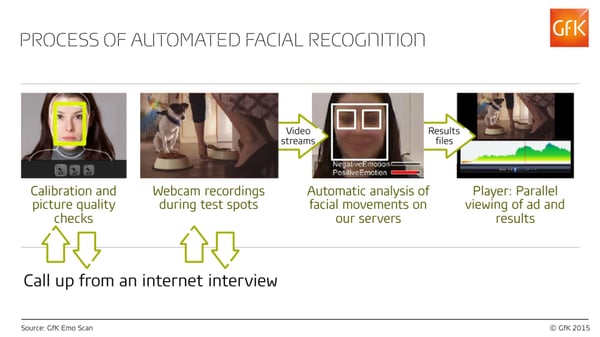 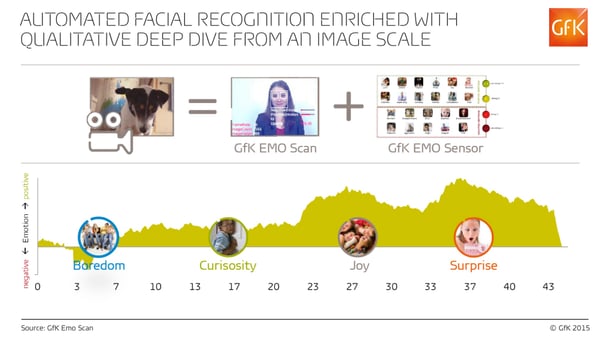 This approach is both evaluative and diagnostic, since we want to answer two questions: 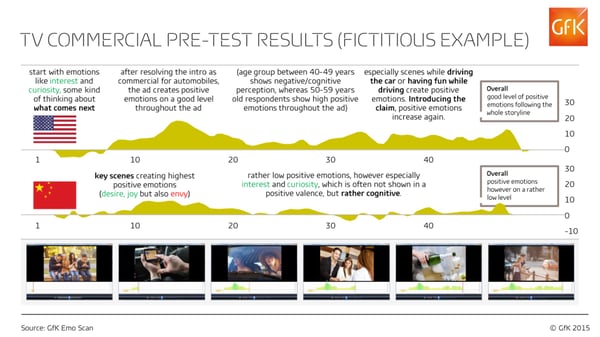 For evaluation of the emotional performance of a TV commercial, we analyze the characteristics of the valence curve. There are four criteria that are crucial when it comes to the performance of a TV commercial. Within the first seconds, a successful TV commercial needs to activate the audience emotionally with the so-called “Start”. However, the start alone is a weak predictor, since the effect can interfere with the initial orienting response, often accompanied by frowning.

Therefore, we additionally analyze the emotional shift (‘Shift’) from the beginning to the end and the emotional peak (‘Peak’) of the TV commercial. Moreover, advertisers can make a higher impact with a great emotional finish (‘End’), which implies that the audience gets the punchline of the brand message.

’Peak’ together with ‘End’ build the basis for the GfK EMO ScanTM Score. These two aspects are most strongly linked to vividness and liking of TV campaigns and thus are highly predictive. GfK EMO ScanTM Score is one single number (a Key Performance Indicator or KPI) that evaluates a TV commercial’s emotional impact and is easy for automakers to capture, compare and communicate. Together, the four aspects are strong indicators for potential of optimization in order to create successful campaigns. 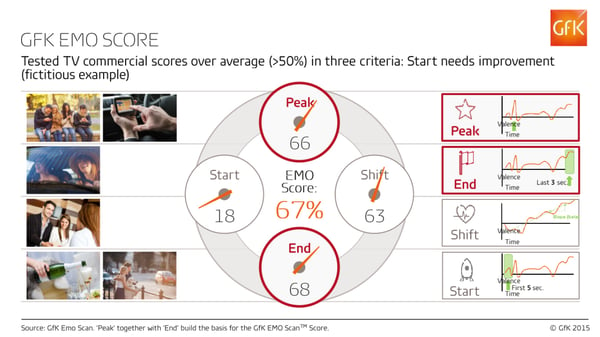 Understanding what worked, what didn’t and why

Although the GfK EMO ScanTM Score is a convenient way to communicate the emotional strength of an ad, the curve can become complex and needs a certain degree of interpretation. Therefore, if you have just started using GfK EMO ScanTM, ask experienced colleagues for support.

When diagnosing an ad, we seek to understand why consumers emotionally engage with a TV commercial by combining biometric facial coding measurement from GfK EMO ScanTM with what people self-report about their feelings by selecting photos that illustrate their emotions, a test we call EMO Sensor. This allows us to optimize the TV commercial from scene to scene in order to reach the highest emotional impact.

By combining evaluation and diagnostics, we can analyze a spot to understand what worked, what didn't and why.

GfK EMO ScanTM are conducted when people voluntarily choose to participate in a study that involves facial recognition. Participants either come to a market research studio or take part at home using a webcam. After the camera is calibrated to the person's face and sufficient lighting is confirmed, the software takes a baseline measurement of the participant's face. This is used for measuring changes in emotion.

Next the person's facial expressions are recorded while the commercial plays. These pictures are then transferred to GfK servers, where they are converted into data. This is the only data forwarded to GfK researchers. No photos or videos of participants are ever used by GfK for reporting.

The anonymous data is fed into a software tool that overlays the "valence" curve on the video. This allows researchers to visualize to the millisecond when exactly during an ad a positive or negative emotion was expressed, as well as its intensity.

How a car manufacturer used it

One automaker used GfK EMO ScanTM to test four different ad spots. Based on the results of GfK EMO ScanTM, the company changed the starting scene and adjusted all scenes to give them stronger emotion. Typical scenes in the TV commercials with high emotional content included people experiencing adventures, interacting with friends or pets and expressing feeling with depth. In comparison, car commercials with prototypical landscape scenes (which are often used by automakers) performed much weaker.

As an evaluative tool, GfK EMO ScanTM provides valuable insight; in combination with EMO Sensor, and with other market research and brand tracking tools, automakers have a unique way to understand the effectiveness of advertising.

Today, automakers have understood the importance of evoking emotion, not only in advertising, but also in design, features and engineering. Sometimes advertising fails to arouse emotion when it is too contrived or far outside a person's context.

This means that automakers can test in advance if their advertising packs the emotional punch they want.

A brief overview of tools for measuring human emotions:

Self-Reporting tools – This is the simplest and easiest way to measure an emotional reaction – you just ask the respondents how he or she feels. Unfortunately, the results can be biased because respondents rationalize what they felt.

Physiological Response tools – These types of tools measure heart rate, blood flow and other biological responses. Although measurement with these tools is quite accurate, they can be complex and expensive to set up and therefore hard to apply to market research.

Manual Observation – This approach involves an expert evaluating what another person appears to be feeling by observing that person’s facial, full body or vocal reaction. For a large international study, you would need lots of experts, and they may be biased by subjective observation.

GfK EMO ScanTM – GfK EMO ScanTM is an automated facial recognition system that measures emotional reactions. All you need is a computer with a webcam and an internet connection when conducting EMO ScanTM online. The tool can be used in large, global projects and has been proven to be highly accurate in predicting emotions.

Want to try it out?

Mandy Nuszbaum is Senior Manager Insights & Consulting at GfK in Germany. To gain full insights and benefits from our tool, please contact ushere.

For more about our offerings, visit our Automotive and our GfK Emo Scan pages.

Rebuilding brands in the new abnormal