Turbulent economic times in Russia are making their mark on sales of car tires and spare parts in Russia. Not only are currency fluctuations skewing prices and sales volumes, but consumers are adjusting their behavior.

For car tire sales, I expect a decline of 20% in 2015, since the car tires market is highly dependent on the sales of new cars.

Our data and this context come from GfK Point of Sales Tracking, which covers retail channels in major cities in Russia with a population of more than 500,000, in seven federal regions.

The main reason the market declined was the decreasing number of new cars sold. Looking forward, the sale of summer tires is likely to stagnate less than that of winter tires, since winter tire sales are strongly correlated to new car sales.

It is interesting that in previous years, car tires for larger rim diameters (17 inches or higher) showed consistent and considerable growth. This is driven by the changes to the types of cars registered cars in Russia. Those with larger-rim diameters are becoming more and more popular and require car tires of larger diameters, thus the trend is likely to continue in 2015.

All of the above will eventually lead to a new equilibrium; however the market structure is likely to change in terms of brand share. I expect price competition within the segments among foreign producers, and I see opportunities for local manufacturers. Those who can maintain competitive prices will be the beneficiaries of the market stagnation in terms of market share, though in volumes there might be a slight decrease, even for the most successful brands.

The retail structure in Russia is shifting from a large number of smaller sellers to a smaller number of sellers with a large retail presence. This trend of retail concentration is something we also observe in product categories such as small domestic appliances, major domestic appliances, telecommunications, and consumer electronics. We expect it to continue. Chain stores and supermarkets tend to sell more tires from year to year, which is easily explained by their lower prices, however the assortment cannot be compared to that of specialized retailers.

However, the concentration of retail points of sale is not the major question for tire distribution in Russia. Actually, traditional retail channels are experiencing strong competition from online sellers of car tires. In 2014 the online share of tires sold was estimated to be 25%, and we expect it to continue expanding in the years to come . 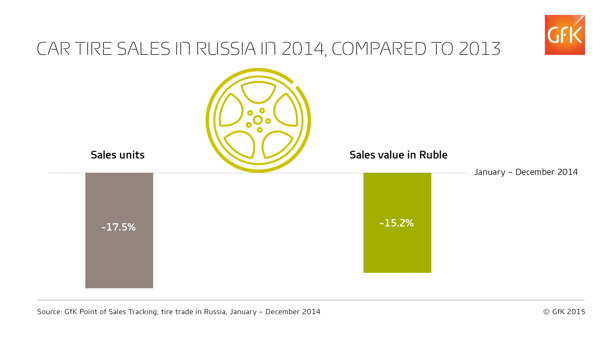 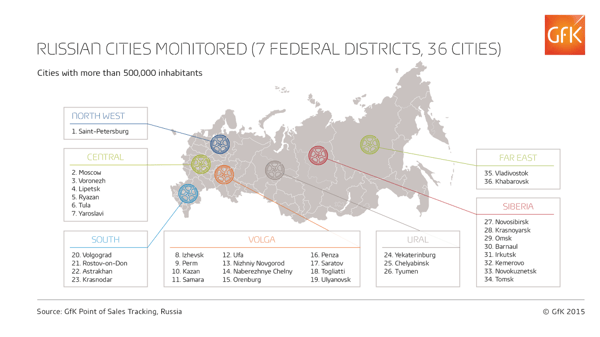 In addition, I expect to see a one-digit decrease in sales for spare parts in 2015, due to the smaller number of new cars sold and the overall economic situation.

Sales of spare parts in 2014 also declined in volume terms for products like car bulbs, starter batteries and wiper blades.

Spark/glow plugs were particularly hard hit, with sales volumes down 22% in 2014, compared to 2013, and the value of sales down 19.9%. This can be explained by changes in the market structure and the increasing share gained by car garages, which absorbed the sales from the traditional retail. GfK does not track sales from car garages.

Ivan Tyndyk is Marketing Consultant of Automotive at GfK in Russia. To gain full insights and benefits from our detailed study of the Russian tire market, please contact us here.

For more about our offerings, visit our Automotive and POS Tracking pages.