The smart home – enticing enough to pay for?

Companies eager to profit from the growing market for smart home products and services should feel encouraged by our latest research from the UK. It shows an overwhelmingly positive response from consumers to the idea of a fully-connected, smart home, with more than three-quarters keen on the idea. But there is a sting in the tail: only a third would currently be prepared to pay for it.

Consumers are very keen on the possibilities offered by smart homes

First, the good news. A significant 76% of people are interested in smart home technology, rising to 86% of 25-44 year olds and a striking 90% of 18-24 year olds. Even the older generation is on board, although to a lesser extent, with over half of those aged 55 years and older positive about it.

Breaking it down in terms of the specific smart home capabilities highlights in more detail just where consumer interest currently lies:

Of course, people have been talking about smart homes for a number of years. It is only now, however, that a confluence of factors, such as advances in the technology and infrastructure developments, are coming together to make what were interesting possibilities more of a reality in this new era of the ‘Internet of Things’.

But they are less keen on paying for it

While consumers have given a massive thumbs-up to the technology, our research has also found they are notably reluctant to pay for it. Only 35% said they would be willing to pay for the cost of making their homes smart. It varies somewhat according to age, however: around half of those aged 18-34 are prepared to pay (49% of 18-24 year-olds and 52% of the 25-34 age group), but that drops sharply to 21% of people 54 and older.

That latter figure is the one brands need to bear in mind. Achieving the real gains of a smart home will stem from having a fully-integrated system which usually demands a significant and long-term investment. This sort of expenditure and commitment is more likely to be made by people who own their homes.

But here’s where the age gap makes a difference: those for whom the technology is most appealing belong to what is being called ‘Generation Rent’ with just three in 10 of those in the 18-34 year-old age group owning their property. This will obviously have an impact on their willingness and ability to make such a financial commitment. 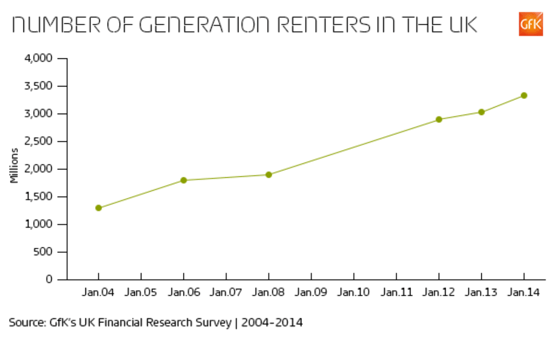 Such a dichotomy is not an insurmountable obstacle for brands, however. For those wary but better-off older consumers, companies need to ensure that their offerings are made in such a way that consumers understand clearly how the technology fits into and benefits their lives. For those who don’t own their homes, it could be a question of finding solutions that people might be able to take with them when they move.

Apart from the ownership factor, there are a number of other challenges facing brands in this emerging market:

With the size of the worldwide market for smart home technology set to be substantial, winners will be those companies which not only overcome any technological issues but, more importantly, offer compelling enough reasons for consumers to be persuaded to put their hands in their pockets.