The (Social) Science of Complaining for Belgians

Remember that time you wrote a letter and sent it to your energy provider because you were unsatisfied with your bill? The digital evolution has caused a lot of changes in the (corporate) world, while the rise of Social Media has taken away the role of ‘gatekeepers’, holding off information, or complaints.

3 out of 4 Belgians have complained at least once, and more and more these complaints are taken to Social networks such as Twitter and Facebook. They reach out, not only to manufacturers, retailers or service providers, but also to millions of other consumers. This requires a whole new approach from the company to the complainer.

While more traditional channels are still the most popular way of voicing complaints in Belgium, Social Media is definitely on the rise. E-mail (58%), telephone (33%), and corporate websites (25%) are the most popular channels due to the easier access for the elderly. It might not come as a surprise that the younger generations (even up to age 44) turn more towards Social Media. 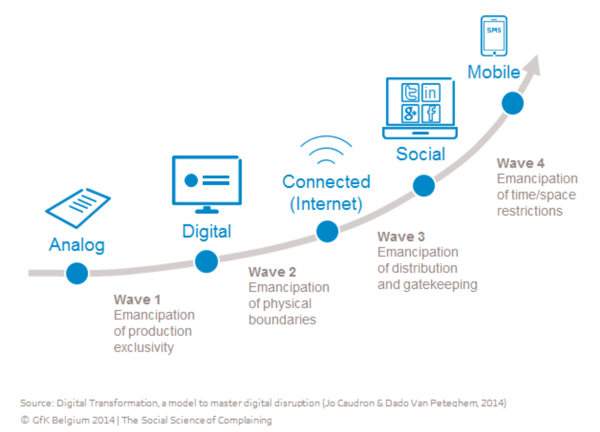 In general, 6% of Belgian consumer has used Social Media to file a complaint to a company, just under the United Kingdom (7%). However, of all youngsters (15 – 24) who have send out a complaint, 18% used Social Media to do so. Facebook is the most popular platform amongst all generations, with Twitter being second. Other social networks (Instagram, LinkedIn, Google + …) are almost never used, however they are also on the rise with consumers under 25 (3%).

Social Media as a megaphone after not being heard

Speed is however the most common reason to use Social Media: not only do consumers expect faster response (42%), but also a faster actual solution (33%). At last, Social Media is perceived as more convenient than other channels (29%). These drivers behind Social Media usage are the same regardless age, gender, social class …

Complaints via Social Media are likely only to grow over time. Today, half of those complaints however could have been avoided if sufficient earlier follow-up via other, more traditional – private – channels would have taken place. Because of the social aspect and the disappeared gatekeeper, Social Media is driving companies to handle complaints faster, better and with more open communication.