back
3
min read
share this page
Trends and forecasting

Smart value in the smartphone market: the highs and lows

Within as little as three years, 69% of the planet’s population will own a smartphone. That’s 5.2 billion people with a smartphone by 2017, from Abuja to London, Mumbai to Zagreb. As the market continues to expand it gets closer to saturation point. What impact will this have on the average sales price of these increasingly ubiquitous devices?

Sales of high-end smartphones - priced US$500 and over - increased by 24% year-on-year in 2013. That’s 2.5 times more than the market grew in the same period. Although this rapid expansion was driven primarily by the emerging regions due to superior purchasing power and early adoption in developed markets of Asia Pacific, North America and Western Europe. these regions represented 61% of high-end smartphone sales globally in 2013.

But our forecasts indicate that the balance of spend on high-end devices is already shifting to emerging regions, with China leading the way (see Chart 1). The Middle East and Africa and Emerging Asia are becoming the fastest growing regions for high-end smartphones as their consumer base broadens. Here current growth rates are leaving the developed regions behind – and they offer significant potential for continued expansion. But just how long can this growth last?

Having enjoyed a compound annual growth rate (CAGR) of +48% for the past three years, the high-end market is set to decline - and soon. We forecast the high-end smartphone market will slow in 2015 to +8% year-on-year. The decline will be driven by a combination of the market for smartphones approaching maturity in the developed regions, and the aggressive promotion of cheaper devices that have significant scope for growth in the emerging regions. By 2015 lower priced devices will be on the ascendancy.

That’s not to say that the unit price of high-end handsets will fall: we expect price levels to remain consistent, but the premium for high-end will continue to increase (see Chart 2). In 2013 the high-end annual selling price was only 1% lower than three years earlier in 2010, but in the same period the premium for high-end smartphones rose by 19%. As more lower-end devices come to market we expect the premium price gap to widen further. This will have the effect of making the high-end look overpriced, adding further pressure on unit sales. 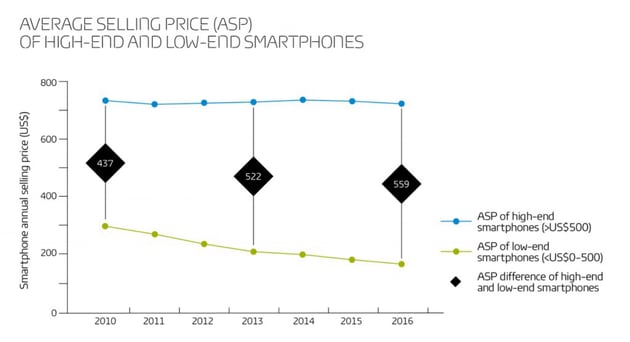 The aggressive pricing policies of local vendors – especially from China and India – will ultimately mean that the US$250-US$100 priced smartphone will reach saturation by 2015. So the pressure will be on manufacturers to find new markets, and this will mean fulfilling demand in emerging regions where consumers are more cost sensitive. Lower income levels and the absence of handset subsidies combine to keep prices keen. In Emerging Asia, Middle East, Africa and Central and Eastern Europe, the sub-US$100 segment accounted for 79%, 65% and 49% respectively of total handsets in 2013. Ultimately, as they seek new customers for their devices, manufacturers will be driven to produce smartphones for less than US$100 to meet demand.

The demand across the emerging regions for handsets priced below US$100 is estimated to be around 510 million units, nearly one third of the global sales last year. In a region where there are very few smartphones to be had, making devices available at an affordable price band will result in rapid adoption on a huge scale.

An example from China highlights the impact local brands can make on pricing in a market. Chinese brands’ share of the domestic smartphone market had increased 30% to 67% by Q4 2013 from Q1 2012. In the same period, average selling price (ASP) of Chinese brands dropped 17%, while leading brands increased their ASP by 14% which resulted in top 6 international vendors’ share in the same timeframe dropping to 33% from 57%.

For brands dominating the high-end smartphone market, diversifying their portfolios is critical to maintain market share. Local brands are more likely to cater for the lower end of the market, and are expected to fuel smartphone adoption in emerging regions through diverse distribution methods and increasingly aggressive pricing. In the second half of 2014, we forecast the Chinese brands to not only continue their strong growth domestically, but also to gain share across other emerging markets with the same strategy of offering smartphones with strong specifications at low price points. This trend is likely to come at the expense of the international brands.

The future of the smartwatch and its impact on smartphones

A smart form for the smartphone?