A GfK study revealed that overall, some 61 percent of consumers in France have a favorable overall opinion of electric vehicles, but customers are polarized when it comes to actually considering a purchase, usually due to costs.

Other things holding back consumers in France are the lack of choice and a belief that there is little infrastructure to support electric vehicles, such as charging points.

So why would someone in France choose an e-vehicle?

About 85 percent believe low emissions are the main benefit provided by electric vehicles; some 78 percent see them as easy to operate. Just under half say e-vehicles are "safe" (49 percent), followed by "reliable" (46 percent) and have "low maintenance costs" (39 percent). 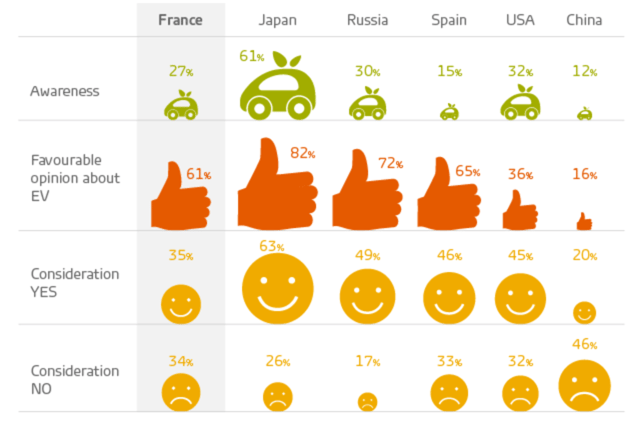 Another interesting point from the study, which was conducted in six countries: French consumers associate electric vehicles with low emissions - e.g. with a benefit for society. This contrasts to Japan, where consumers see the cars as offering direct personal benefits.

Nicolas Cardon, Services Automotive Technology Division Manager at GfK in France, said, "The French perceive the benefits of electric vehicles as indirect, i.e. 'low emission,' rather than direct or personal, such as 'safe, reliable, or easy to maintain.' Automakers should strive to give consumers a more balanced view on the individual and societal benefits."

Nicolas Cardon is Services Automotive Technology Division Manager at GfK in France. He can be reached under: nicolas.cardon@gfk.com