To be successful in the smartphone category, stop selling smartphones

See thoughts and comments from this article featured on mobile and technology news source BGR.

The drivers of success in the smartphone category are changing rapidly. The only way to truly compete with Apple and Samsung is to stop selling the product benefits and start selling a lifestyle.

Having worked closely with mobile manufacturers (OEMs) since 2007, it is frightening how quickly the drivers of success change. Success can be measured in many ways but for now let’s define it as having at least 5% market share (without this mobile network operator (MNO) support is difficult) and some level of profitability. To be successful in the smartphone market, the advice in the early years (2007-2010) was to innovate quickly and execute effectively. Consumers wanted a simple, quick and responsive user experience, access to great apps and a stylish and well-designed device. If OEMs ticked all these boxes then success would follow. HTC was a great example of this, it made (and still does make) great hardware whilst adopting the content rich and simple-to-use Android platform.

The dynamic of success has changed and 2011 was a pivotal year for this shift. In May Samsung launched the Galaxy SII smartphone, the catalyst for its stratospheric rise in market share. The Galaxy SII was a great phone but what Samsung also did was to target the premium end of the market, marginally undercutting Apple on price and support the launch with serious amounts of above-the-line marketing and retail incentives. Whilst Samsung’s brand wasn’t particularly unique in the smartphone sector, it was extremely familiar due to its cross category presence. Samsung invested heavily in its ‘Galaxy’ sub-brand which is now on its fourth generation with mini and maxi (Note) versions to meet the different form factor needs of the broader market. With sustained high levels of investment in its brand, Samsung not only has the resource to push products to consumers but its ‘Galaxy’ sub-brand is now a big pull for smartphone purchasers.

What this means is that the recipe for success has changed and delivering a great smartphone experience has become a minimum expectation. Furthermore, differentiating on benefits such as camera, location-based services or music (to name just a few) is increasingly difficult because smartphones are expected to be multi-functional. With most smartphones running Android, the playing field in user experience has been levelled between the competing OEMs. Where Samsung has swung the scales in its favour is through the amount invested in the brand - not products. This is why since 2011 Samsung has soared past rivals like HTC and Motorola.

In 2013 and beyond does this mean the game is over? Will Apple and Samsung continue to rule because no one else can compete against their marketing budgets and retail channel influence? Whilst it will be difficult, I believe there are still opportunities for other OEM’s to challenge Apple and Samsung because the nature of the category has changed. In Western markets, the smartphone category has matured very quickly and adoption has reached majority level penetration. 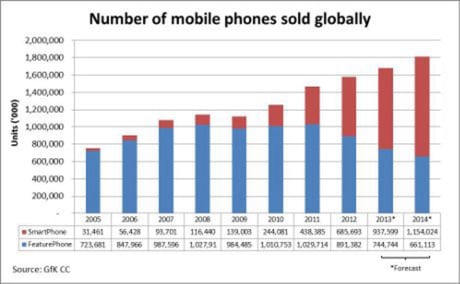 The data in the chart shows that even at a global level the number of smartphones will for the first time in 2013 account for the majority share of all mobile phones sold. This has risen quickly from 20% in 2010 to 45% in 2012 and a projected majority share of 57% in 2013. What this means is that there are significantly more smartphones being sold than ever before at low and high price points. In addition, whilst Apple and Samsung dominate market share there is a huge long tail of other OEMs battling it out for the rest of the market. Heavy competition among many OEMs means that opportunity to differentiate on product is very difficult, although still achievable.

With so much choice and smartphone adoption moving into the late majority in many countries, the emphasis needs to shift from selling products to operating like a lifestyle brand. OEMs should move away from promoting product features as their headline story and look to other product categories for how to differentiate in an increasingly saturated and commoditised market. For example, Nike doesn’t just sell trainers, it sells a fit and active lifestyle. Similarly, in technology markets, Bose does not sell speakers, it believes life is better with better sound.

Smartphones, and everything it enables, is transformative and empowering so there should be many options as to what its lifestyle message could be. When Apple first entered the category it showed how the App Store could meet all your needs and empower you to do more on the move. The market has moved on from this now but if OEMs can pinpoint a more refined type of empowerment they can focus their product innovation in a more effective way. Innovation is what they do best but there are so many attributes to a smartphone that these innovations can get lost in product marketing, potentially having little impact in driving sales. If innovation is focused on supporting their higher purpose OEMs can choose where to focus their innovation and fit it into their brand story.

Without making this shift OEMs will struggle to differentiate and thus be less able to command a premium for their products. The only other way to compete in this fierce product category is on price. Once price becomes the primary lever, the game is truly over.