The value of product families

For marketers, the smartphone industry is fast-paced and highly competitive. From new product development to marketing devices, generating awareness and buzz amongst consumers is critical. With a host of new smartphones imminently entering the market, we asked over 3000 UK consumers in March 2013 whether they had heard about a selection of rumoured or announced phones taken from leading mobile tech blogs at the time[i].

So what do the results say about the state of the smartphone market and the role of product families? 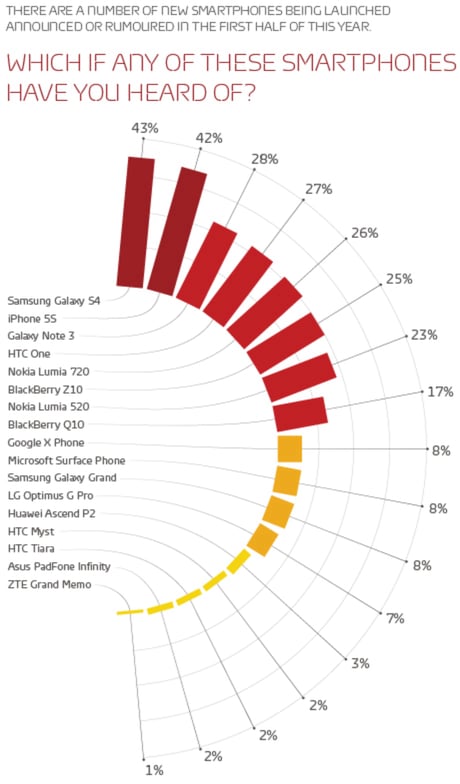 The results can be split into different levels of awareness:

1) The greatest level of awareness, unsurprisingly, belongs to the models in the most famous and successful product families – the Samsung Galaxy S4 and Apple’s iPhone 5S. At the time of the survey, the S4’s launch date had just been announced in New York. As of writing this, the iPhone 5S has not been announced by Apple, but rumours around its next smartphone assume that it will be called the 5S based on previous naming convention.

2) Beyond these two smartphones, between 17-28% of those surveyed had heard of the following five models: the HTC One (announced but no release date yet specified); BlackBerry Z10 and, to a lesser extent, the Q10 (both available to purchase); Galaxy Note 3 (rumoured); Nokia Lumia 720 and 520 (both announced). Samsung is represented in this second tier by its second high-end product family, the Note. The other models are from main product families.

3) The models with 7-8% awareness can be split into two distinct types. The first includes the Google X Phone and the Microsoft Surface Phone. Both phones were rumoured at the time of the survey, although the Google phone has since been announced as the Moto X. The second type includes the Samsung Galaxy Grand and LG Optimus G Pro, both of which had been announced at the time of the survey (the Grand had been released), but neither having been released in the UK. Awareness of these phones may have arisen from an interest in the smartphone market, for example through tech blogs, or alternatively have simply been a recognition that mentions of ‘Google’, ‘Microsoft’, ‘Samsung Galaxy’, ‘LG Optimus’ are heavily associated with the smartphone market.

The phones with the lowest levels of awareness all belong to the smaller brands in the market. They are either not part of a clear product family (HTC Myst - announced and released as the ‘First’ in April, and the HTC Tiara – rumoured), or belong to product families that are still being established in the UK (Asus Padfone Infinity, ZTE Grand Memo, Huawei Ascend P2 – all announced at the time of the survey).

The phones with the highest level of awareness, iPhone 5S, and the Galaxy S4, plus the second tier of phones (excluding the Galaxy Note), are more likely to be recognised by those who already own that brand. The less recognisable phones, like the Samsung Galaxy Grand or HTC Tiara, are as likely to be recognised by owners of other brands as their own. It seems that owners are primed to be aware of future launches in their brand’s famous product family. This may partially be due to the marketing efforts of their brand, but given that the phone with the highest level of awareness amongst its brand’s owners (the iPhone 5S with 68% awareness amongst Apple owners) is as yet still rumoured, it may be also because these people are naturally more interested in the brand and therefore seek out information about future handsets.

So what does all this mean?

Phones that have been marketed extensively (the Galaxy S4, HTC One, Lumia 720 and BlackBerry Z10) have reached roughly a quarter to a half of the internet-using public in the UK. However, phones with no official release dates, but that belong to well-known product families (the iPhone 5S and Galaxy Note 3) have similarly high awareness.  Part of the power of having a well-known product family with a clear naming convention is that people anticipate the production of the next phone in the series, and as we’ve seen, this is especially true of those that already own the brand. This has a number of potential consequences:

> ‘Googleability’: those interested in researching future launches might be able to find information more easily if they can determine their own search term. This is most clearly seen in the assumption that the next iPhone will be the 5S. Searching for ‘iPhone 5S’ brings up over 26 million hits on Google.

> Fans will create their own buzz around the product. An obvious search term, hashtag or community page title allows fans to congregate. Brands can factor these congregations into their marketing plans.

> A potential product with a recognisable name acts as a focus for press attention, especially if it is clear that the future launch will have plenty of fans and interested parties. Tech blogs, newspapers and magazines can help feed into the cycle of growing engagement with the product up until the launch. New products lacking massive marketing spend are unlikely to get this type of attention, unless they are rumoured to be introducing game-changing technology (for example, flexible phones).

> However, given the amount of investment that goes into developing a product family’s brand, deciding to scrap the line means losing the name-recognition and kudos built up from the previous iterations of the product family. This means that brands may feel locked into continuing a product family long after the family has lost its competitive edge. Also, consumers will have certain expectations for the next product in the family based on previous versions. If these expectations are unrealistic or not in accordance with the brand’s overall strategy, the brand may face a greater struggle marketing the product than if these expectations had not existed. Therefore an established product family can make it difficult for an organisation to change direction with its product strategy...

> …And easier for the competition to take counter-measures. An example of this would be HTC and Samsung’s countermeasures to Apple’s fairly regular iPhone release schedule. The two rivals now schedule their flagship devices to launch in the spring, thus presenting consumers with a choice between a no-longer novel iPhone and a brand-new alternative.

> Another issue with this strategy is the potential cannibalisation of the current handset in the product family if consumers are waiting for the new release to buy their smartphone...

> …But it might also shore up a brand’s retention strategy as owners have a clear route for their next phone purchase.

Even taking into account the few negatives, and as long as the brand is able to improve each iteration of their device and avoid disappointing consumer’s expectations, a clearly-defined product family is a powerful weapon in a brand’s marketing arsenal.

The Internet of Things: Fresh potential for businesses but with familiar pitfalls