Indonesia is a growing market, which offers huge opportunities for consumer brands, tech and media companies. With over 250 million inhabitants, it is the world’s fourth most populous country and has millions of people rising into the middle class each year. Much of its internet access is smartphone-based, which makes it a lucrative market to study online mobile behavior.

We run regular research looking at device use and online behavior in 14 countries. This is passively collected behavioral data, which creates an easy-to-use round-up of the cross-media metrics that matter. In this blog, we share some of the top trends in Indonesia.

Indonesia smartphone users spent an average of 96 minutes on their handheld device per day during 2017. That is higher than UK, Germany, Poland, Russia, Brazil, Mexico or Spain. This usage is also growing – we measured a 15% rise in smartphone minutes across the year. This rapid growth of smartphone adoption has already been reported in publications such as Telegraph and Techcrunch.

So how are Indonesians using their smartphone? By comparing minutes used per day across key categories, we can create a “share of clock” for smartphone use.

Across the top five web categories, Indonesian smartphone users spent an average of 6.4 minutes per day on shopping sites during 2017. This figure is relatively high in Indonesia compared with other markets in keeping with growing smartphone use. Usage grew across the year, from around 6 minutes in the first 6 months to just under 7 minutes for the second half of the year. This is a key metric to watch in order to evaluate potential growth and assess season fluctuations. For example, shopping time grew to 7.5 minutes per day for Dec 2017.

Shopping related websites also have one of the highest reach figures. An average of 92% of Indonesian smartphone users access shopping sites on a month-to-month basis versus other categories. So while players may spend more time per day on Gaming sites, for example, at 13.3 minutes the number who do so is around a third less at 62%. 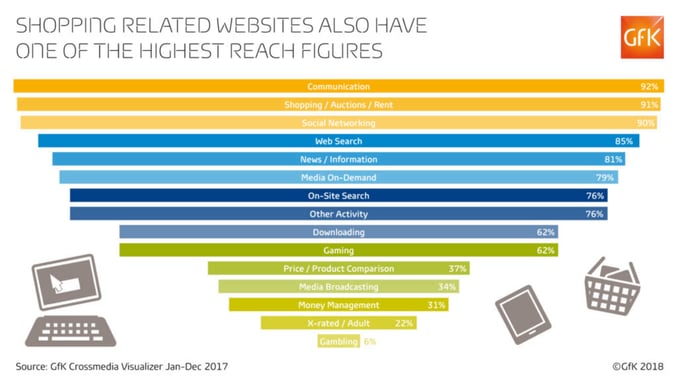 Almost 60% of Indonesian smartphone users visited online shopping sites 10 or more days per month and around a third (32.8%) visited shopping sites 20 days or more per month. The frequent visitation of these sites provides marketers with a great opportunity to engage with shoppers on a regular basis. 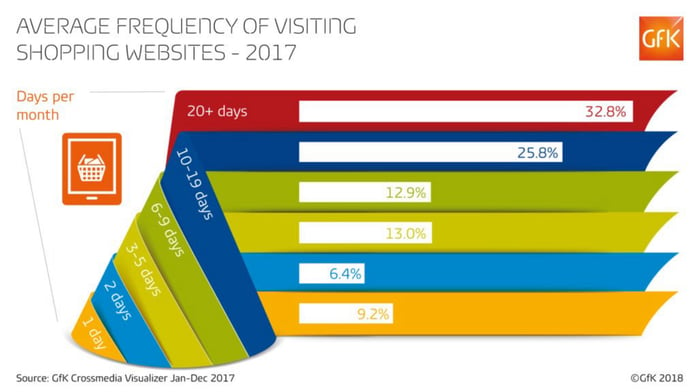 Drilling down to look at the most popular (defined by reach) shopping sites visited, Google Playstore leads the pack with (92%) followed by more local eCommerce sites Blibli and Lazada. Lazada seems to be benefitting from Alibaba’s investment and growth plans in Southeast Asia. Already we can see local sites competing strongly with global brands. Apps/sites such as Grab and Go-Jek, offering similar services to Uber are very popular. Google has started investing in Go-Jek, which in addition to taxis and motorbikes, also offers services like grocery delivery. Uber has dropped out of the Top 10 (although it was a top 10 player in January 2017) with Grab acquiring the company for its Southeast Asian operations earlier this year. 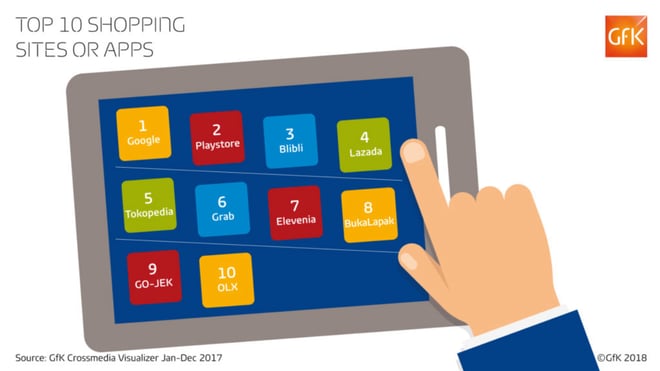 Given the large amount of time Indonesian smartphone users spend each day on communication (32.6 minutes) and social networking (24 minutes) there is huge potential to create potential shopping opportunities. By using the latest online data measurement, we can help brands better understand the purchase journey of today’s mobile-first consumers and convert those clicks to sales.

GfK has developed digital behavioral panels in 14 markets around the world. Panellists allow us to passively follow their digital behavior across their devices – desktop, tablets and smartphones – in order to explore patterns of behavior. The Crossmedia Visualizer tool enables clients to mine the information collected within these panels to develop a view into how consumers are spending their time online. This provides insights into creating strategies to further engage and connect with these consumers.

For this analysis, we focused on data from Indonesian smartphone users and how they spend their time online for January to December 2017.

For a broader snapshot of device use for January 2018: Germany, Mexico, UK, Poland, Russia, Indonesia, Brazil and Netherlands.

Online retail: are price promotions the answer as a lean ‘golden quarter’ looms?