In a fast-moving marketplace, trusted opinions matter more than ever

We all know them: people who we instinctively feel we can turn to for advice on a particular topic, or in some cases pretty much any topic. We trust them, we value their advice and we’re likely to act on their recommendations. In a world where consumers are more able to filter out advertising than ever before (with, for example, over half of respondents in a US survey reporting using ad-blockers online), and are bombarded with information and opinions from all sides, identifying these influential citizens and getting them on your side is more important than ever. It’s also crucial to keep up with the ways in which peer-to-peer influence is evolving.

This is a topic that GfK Consumer Life (and its earlier incarnations) has been researching for many years now. It was back in the 1940s that Elmo Roper in the US undertook pioneering work for Standard Oil to identify what he termed The Influentials – the one American in ten who told the other nine how to vote, where to eat and what to buy. In those days, there was very much a social and political slant to the group, and activities that defined them included writing to an elected representative and attending public meetings. Over the years, the group gradually became more consumption focused, with the introduction of category Influentials. These groups had a particular interest in categories like automobiles, food, and healthcare.

Back at the start of this decade, we observed that, thanks to the power of peer reviewing and social media, it was possible for anyone to be an influencer, or at least to share their opinion with the masses. Still, however, it was necessary for consumers to figure out who they could really trust from the mass of opinions being spewed around the world wide web. Perhaps as a reaction against this, we’ve seen consumers in some parts of the world become more circumspect in this regard. 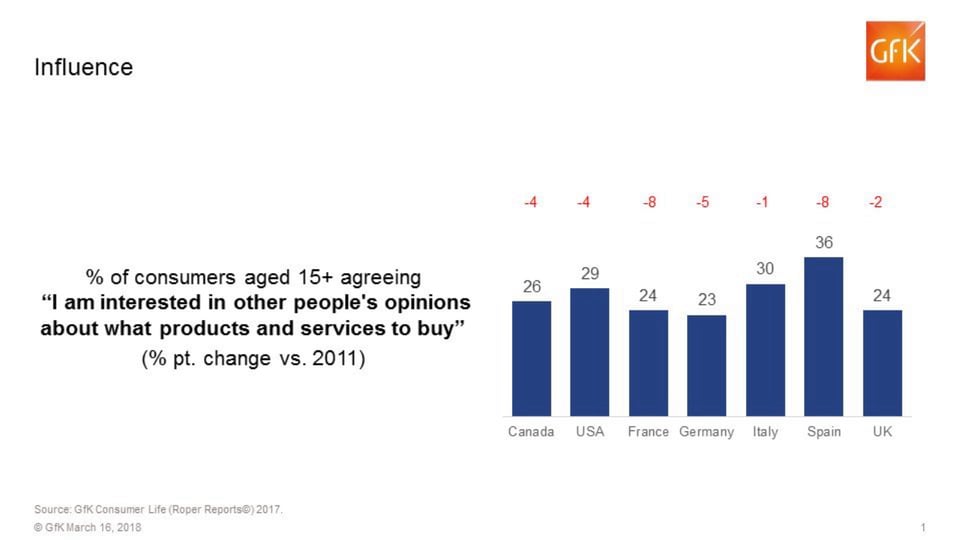 For instance, the percentage who express interest in other people's opinions about what products and services to buy has fallen since 2011 in a number of mature markets around the world, including Canada, the US and most of Western Europe, according to the GfK Consumer Life annual survey of global consumer attitudes and behaviors. This could be a reflection of the realization that some of the opinions out there are less trustworthy than others. Then there’s the problem of “fake news”, which was highlighted starkly here in the UK late last year when a journalist was able to trick TripAdvisor into making his garden shed the top-rated restaurant in London. At the same time, the proportion of global consumers who often feel overwhelmed with information when making a large purchase has grown from 21% in 2012 to 30% today.

Trusted opinions consumers can rely on

If anything, stories such as this show that it’s more valuable than ever for consumers to be able to find trusted opinions and advice they can rely on. The latest evolution of this concept is the Leading-Edge Consumers model used by GfK. This segment is defined by factors including category passion and early adoption, as well as being influential. Understanding this group, and what makes them tick, can be a powerful tool in today’s marketing world, where brand ambassadors and promoters are highly prized.

There are numerous examples of brands and companies in many sectors who have successfully leveraged the power of influencers on social media. Fashion and beauty brands, both traditional and up-and-coming indie players, find Instagram a rich seam to mine. And the huge following of younger influencers’ “unboxing” videos on YouTube led to the launch of one of last year’s hottest toys, the L.O.L. Surprise. Understanding Leading Edge consumers can help you harness the full potential of the power of consumer influence. Whether it’s talking over the garden fence to a neighbor, or reading the thoughts of someone on the other side of the world, there’s still a high value placed on a trusted voice.

David Crosbie is a Director on the Consumer Life team at GfK. He can be reached at david.crosbie@gfk.com.